The original theme for today’s blog was to rhetorically axe if Oblahblah knows he’s completely full of it or if he’s that delusional. Then Chrissy,using a Vulcan mind-meld,brought up one point,about not dividing people. I don’t know how to use different color script,but I’ll try to expound on the previous thought.

Obama: Under My Presidency, U.S. ‘The Most Respected Country In The World’

President Barack Obama said Monday that his administration has lifted the U.S. to become “the most respected country in the world.” Obama made the claim during a discussion with Young Southeast Asian Leaders Initiative Fellows at the White House.

PRESIDENT OBAMA: People don’t remember, but when I came into office, the United States in world opinion ranked below China and just barley above Russia, and today once again, the United States is the most respected country on earth, and part of that I think is because of the work we did to reengage the world and say that we want to work with you as partners with mutual interests and mutual respect. It was on that basis we were able to end two wars while still focusing on the very real threat of terrorism and to try to work with our partners in Iraq and Afghanistan. It’s the reason why we are moving in the direction of normalize relations with Cuba. The nuclear deal that we are trying to negotiate with Iran.

Tweet Of The Day: Obama’s Painful Lack Of Self-Awareness…

Obama: “I Am the Closest Thing to Jew” That Has Ever Sat in the Oval Office

Barack Obama reportedly claimed in a conversation with confidant David Axelrod that he is the closest thing to a Jew that has ever sat in the Oval Office.

“President Barack Obama apparently thinks he’s the closest thing to a Jewish president America has ever had.

Speaking to JPUpdates.com, top Obama confidant David Axelrod described a moment where the president expressed exasperation to him over being derided as anti-Israel by some.

“You know, I think I am the closest thing to a Jew that has ever sat in this office,” the president claimed, according to Axelrod. “For people to say that I am anti-Israel, or, even worse, anti-Semitic, it hurts.”

During Obama’s tenure, U.S.-Israel relations have fallen to their lowest point in decades.

Dude is losing his marbles.

NOT THAT IT EVER MATTERED,BUT HIS APPROVAL RATING IS STILL 46%.THEN ASK AGAIN WHY CANKLES IS A SHOO-IN FOR 2016.YOU CAN’T BEAT GIVING AWAY FREE STUFF TO GET VOTES FROM LAZY,IGNORANT PEOPLE.
Daily Presidential Tracking Poll
Tuesday, June 02, 2015

The latest figures include 23% who Strongly Approve of the way Obama is performing as president and 38% who Strongly Disapprove. This gives him a Presidential Approval Index rating of -15. 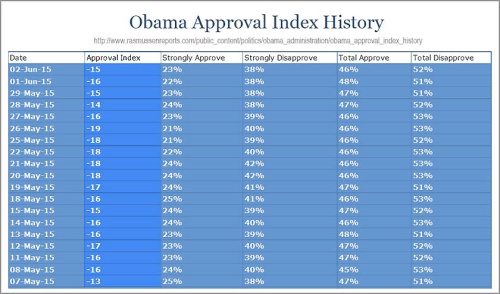