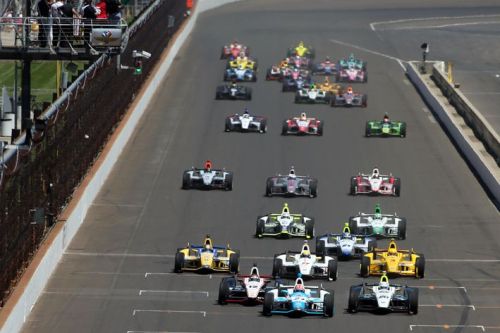 Being a Hoosier, born and bred, and having worked in the press box overlooking the finish line at the Indy Speedway, it goes without saying that I’ll be watching the 99th running of the race today. If you are so inclined also, here is a handy rundown from SBNation.com about the things unique to this racing season. Tops in everyone’s mind this year is probably the incidence of accidents due to problems with car body aerodynamics. Here’s what you need to know:

1. The No. 1 starting position has been good to pole-sitter Scott Dixon, whose only Indianapolis 500 victory came from this spot in 2008.

2. Simona de Silvestro and Pippa Mann are the only two women drivers in Sunday’s race. They will be looking to eclipse Danica Patrick’s record third-place finish by a female set in 2009.

3. The No. 3 is the most successful car numeral in Indianapolis history with 11 victories overall. That total includes two by Helio Castroneves, who again will have the number on his Chevrolet Sunday.

4. Speaking of Castroneves, another Indianapolis victory would be his fourth and move him into rarified company. He would join A.J. Foyt, Al Unser Sr. and Rick Mears as the only four-time winners. No other active driver even has two wins.

6. The introduction of new aerodynamic body panels this year has produced mixed results thus far. In the season-opener on the street course in St. Petersburg, Fla., a piece of debris flew into the stands and fractured a woman’s skull. And things haven’t improved since the kits were used on the Indianapolis oval for the first time. Leading to …

7. After accidents that saw three drivers get airborne and a fourth wreck that seriously injured James Hinchcliffe, a feeling of apprehension hangs over the garage. IndyCar decreased boost and made the cars easier to handle, but there’s been minimal track time to see if those changes will make Sunday’s race any safer.

9. When it comes to Indianapolis car owners, Roger Penske and Chip Ganassi are unquestionably the measuring sticks. The two IndyCar titans have fielded cars that have combined to win nine of the past 15 races.

3 responses to “Indy 99: All Eyes Open for Airborne Cars”