before somebody hits back.
It’s mid-May and the temps won’t get out of the sixties for at least another 10 days or so. Looks like another cold, wet summer. Damn.

Liberal journalist Katie Couric said, “During your tenure at HP, the stock fell by more than 50 percent, which is a bigger drop than companies like IBM and Dell. And you were fired after five and a half years as CEO.”  Then she complained, “You’ve had some unkind words for Hillary Clinton. You said that she was not trustworthy and she hasn’t accomplished very much. I think people might think, ‘Well, she was the senator from New York and she was the Secretary of State.’ How can you really make those claims?”

Fiorina replied, “Well, you see, Katie, in the world I come from, a title is just a title. I mean, you went through a whole bunch of things about me as CEO. You weren’t impressed with my title. Why are we so impressed with political titles? Senator is a title. Secretary of State is a title. It’s a completely legitimate question to say, ‘What has anyone accomplished with their title?’ And the truth is, there are many in the political class who haven’t accomplished a whole lot, despite their titles.”

At the South Carolina Freedom Summit on Saturday, Fiorina didn’t shy away from her record as CEO of Hewlett-Packard, touting herself as having played a key role in keeping HP afloat through the dot-com bust, before directly addressing her messy exit from the company.

I mentioned to my husband this week that I felt sorry for the political satirists, because the Obama Era has made reality so absurd, there was nowhere left for them to go. As evidence, I offer this from today’s news … 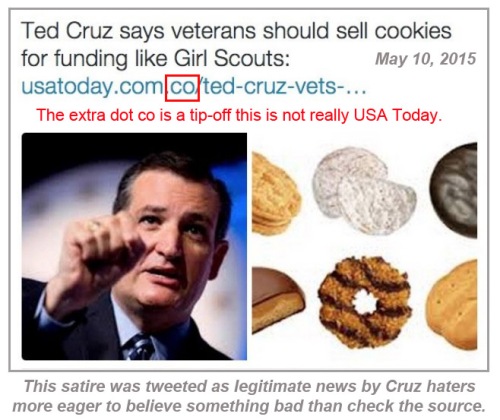 A satire site did a fake news story about how Ted Cruz told a wounded veteran he should sell cookies to raise money for his care. David Nelson News, Occupy Democrats and a host of dimwitted Leftist tweeters passed it on as a true tale.

One IJ Review commenter noted, “As usual the low information liberals can’t tell a real story from the truth, it is no wonder they continue to fall for the lies of hillary and obama.”

One Occupy commenter noted, “Cruz is the worst P O S that has ever came out of the Republican Turd pipe !….EVER !…”

I added my two cents, “This ‘news’ story was taken from a SATIRE site. It’s no wonder our nation is in such a mess when voters can’t be bothered to separate jokes from truth. “I can see Russia from my house!” was also a joke, made by Tina Fey on SNL. How many of you were so eager to believe that Sarah Palin is a moron that you couldn’t care less that she never said it? The fact is you CAN see a small island belonging to Russia from a small island belonging to Alaska.”