Does a cartoon justify murder? UPDATE

May 3, 2015: Two men drove up and opened fire on the site of the heavily guarded “Draw the Prophet” event in Garland, Texas.  The two gun men were shot and killed in the parking lot; one of the officers on duty suffered non-life threatening injuries.  The event was locked down while police searched for a possible bomb while visitors to the exhibit sang patriotic songs to pass the time as they waited for the all clear.  The cartoon contest was held in defense of free speech and to highlight the cowardice of the American press that refused to publish the Mohammad-mocking Charlie Hebdo cartoons that inspired the lethal January 7, 2015, attack in Paris. The $10,000 prize-winning cartoon was drawn by Bosch Fawstin, a former Muslim.

January 7, 2015: Two members of Al-Qaeda attacked the office of the French satirical weekly newspaper Charlie Hebdo in Paris and murdered 22 people. The reason? Charlie Hebdo had published cartoons mocking Muhammed. IMHO, Hebdo has published far worse about Christians, particularly Catholics, and Jews. I am unaware of any of us responding with anything more dire than a strongly worded protest. Normally, I wouldn’t reprint this kind of trash, but I think it’s important that we view the context within which 22 people were murdered by militant Muslims. 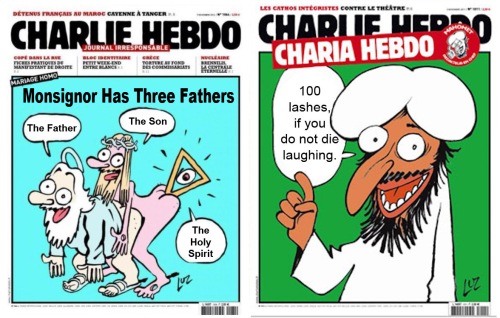 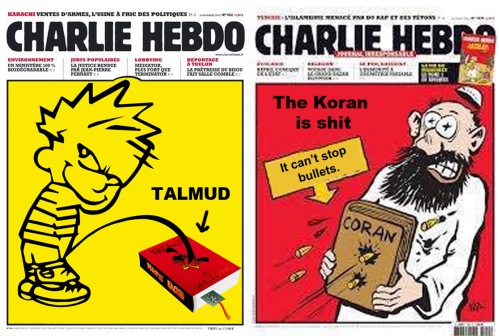 The American Left Stream Media has taken the “Blame Pam Geller” route for the shootings at the ‘Draw Mohammad” event.  On Sunday, she told “Fox and Friends” that she has message for those who want to blame her for what appears to be a terrorist attack on the event:

“I’m not responsible for the violence conducted by others. It’s outrageous that this would even be the morally inverted view of the media, that somehow because we drew a cartoon that two gunmen with AK-47s tried to storm the building and shoot up innocent people, and somehow they’re not responsible?”

4 responses to “Does a cartoon justify murder? UPDATE”