Not simply wrong, but spectacularly wrong.

Climate Alarmists have been around since before the first Earth Day back in 1970, calling us denier-types rude names and screaming, “The science is SETTLED (so shut up and do as you’re told).”

I think it’s only fair to have a look back at what these people were FOR CERTAIN SURE would have happened by now if we didn’t let draconian government regulations destroy our freedoms. 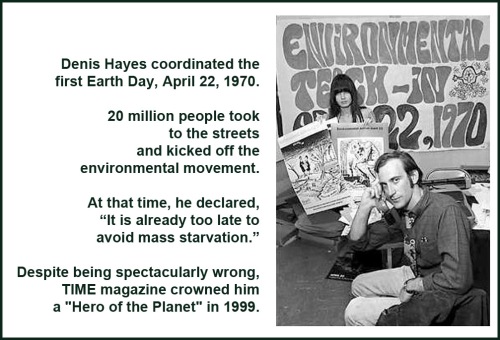 1970: “Demographers agree almost unanimously on the following grim timetable: by 1975 widespread famines will begin in India; these will spread by 1990 to include all of India, Pakistan, China and the Near East, Africa. By the year 2000, or conceivably sooner, South and Central America will exist under famine conditions. … By the year 2000, thirty years from now, the entire world, with the exception of Western Europe, North America, and Australia, will be in famine.” – Peter Gunter (North Texas State University philosophy professor)

1970: “The death rate will increase until at least 100-200 million people per year will be starving to death during the next ten years.” “Air pollution … is certainly going to take hundreds of thousands of lives in the next few years alone.” He also opined that, because of air pollution, Americans born since 1946 had a life expectancy of only 49 years and that this would drop to 42 years by 1980, after which it might level out. – Paul Ehrlich (Stanford University biology professor)

1970: “Civilization will end within 15 or 30 years unless immediate action is taken against problems facing mankind.” – George Wald (Harvard biology professor)

1970: “Scientists have solid experimental and theoretical evidence to support … the following predictions: In a decade, urban dwellers will have to wear gas masks to survive air pollution … by 1985 air pollution will have reduced the amount of sunlight reaching earth by one half.” – Life magazine (January)

1970: “Man must stop pollution and conserve his resources, not merely to enhance existence but to save the race from intolerable deterioration and possible extinction.” – New York Times (Earth Day editorial)

1970: “Dr. S. Dillon Ripley, secretary of the Smithsonian Institute, believes that in 25 years, somewhere between 75 and 80 percent of all the species of living animals will be extinct.” – Look magazine

Comments Off on Not simply wrong, but spectacularly wrong.