Hillary Clinton does NOT care about “little people”

Judge Jeannine: I want a woman president, but not Hillary Clinton! 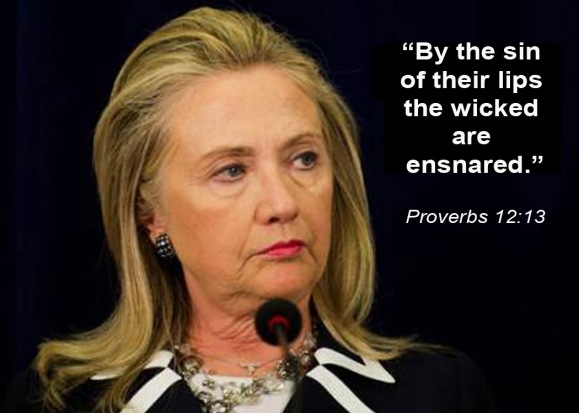 From the book Inside The White House, by Ronald Kessler (investigative journalist) – What Hillary said to her husband, then-Gov. Clinton, when she saw him talking with an attractive female at an Arkansas political rally (p. 243): “Come on Bill, put your dick up! You can’t f**k her here!!”

From the book Crossfire: Witness in the Clinton Investigation, by L.D. Brown (long-time Clinton body guard) – What Hillary said to a State Trooper who was driving her to an event (p. 84):  “You f**king idiot.”

From the book I’ve Always Been A Yankees Fan: Hillary Clinton in her Own Words, by Thomas D. Kuiper – What Hillary said to Rep. Dennis Hastert in 1993 about nationalizing health care (p 20): “We just can’t trust the American people to make those types of choices. … Government has to make those choices for people.”

From the book The Truth About Hillary: What She Knew, When She Knew It, and How Far She’ll Go to Become President, by Edward Klein (best-selling author) – What Hillary shouted at a Secret Service officer (p. 5):  “Where’s the miserable c*ck sucker?”

From the book Unlimited Access : An FBI Agent Inside the Clinton White House, by Gary Aldrige (FBI Agent-in-Charge at White House during Bush and Clinton administrations) – What Hillary screamed at her Secret Service detail (p. 139):  “Stay the f**k back, stay the f**k away from me! Don’t come within ten yards of me, or else! Just f**king do as I say, okay!!!?”

From the book Hillary’s Scheme: Inside the Next Clinton’s Ruthless Agenda to Take the White House, by Carl Limbacher (Newsmax) – Various comments Hillary made to her Secret Service detail agents (p. 89): “Get f**ked! Get the f**k out of my way! Get out of my face!”

From the book American Evita: Hillary Clinton’s Path to Power, by Christopher Anderson (biographer) – What Hillary said to her State Trooper bodyguards after one of them greeted her with “Good morning” (p. 90):  “F**k off! It’s enough that I have to see you shit-kickers every day, I’m not going to talk to you too!! Just do your G*damn job and keep your mouth shut.”

From the book The First Partner: Hillary Rodham Clinton, by Joyce Milton (biographer) – What Hillary to a Secret Service Agent who was reluctant to carry her luggage because he wanted to keep his hands free in case of an incident (p. 259):  “If you want to remain on this detail, get your f**king ass over here and grab those bags!”

From the book Dereliction of Duty: Eyewitness Account of How Bill Clinton Compromised America’s National Security, by Robert Patterson (Air Force Lieutenant Colonel assigned as military aide to President Clinton from May 1996 to May 1998 and one of five individuals entrusted with carrying the “nuclear football”) – What Hillary said to the Marine One helicopter pilot as they were en route to Air Force One (p. 71-72):  “Put this on the ground! I left my sunglasses in the limo. I need those sunglasses. We need to go back!”

One response to “Hillary Clinton does NOT care about “little people””