April 2, 2015: “A beaming Iranian foreign minister emerged from the meeting rooms in Switzerland to announce that all of the theocracy’s major demands had been met. According to the new provisions released on the nuclear deal, Iran will get to both keep active its centrifuges and receive sanctions relief.”

But not to fear … Barack Hussein assures us, “If Iran cheats, the world will know.”  Of course we will.  The large and radioactive MUSHROOM CLOUD will be a dead give-away.

H/t to Pat Dollard whose Gay ISIS graphic I altered.

Comments Off on Mean, hateful who?

It’s pretty commonly known to those of us with more than a spoonful of functioning brain cells that the left is populated by nuts. Not a little nuts, but full-goose, frothing at the mouth, veins bulging from the neck, spittle-flying madness. Now they’re claiming the whole Memories Pizza outrage was fabricated. They just never stop.

Leftist Moonbats Now Claiming The Memories Pizza Attack Was An Elaborate Fundraising Ploy…
Sometimes the Moonbats can really make you laugh. Their attack against the Indiana mom and pop pizza shop failed miserably. 20,000+ people donated money to offset any financial impact. The fundraising is so successful it is being stopped tonight at 7pm. Over $600,000 has been raised.

Pizza owners ‘in hiding’ after saying they would not cater a gay wedding go on TV to say they’ve raised over $500k and that they’ll ‘reopen soon’
Despite ‘keeping a low profile’ Crystal O’Connor and her father Kevin O’Connor went on Fox News to discuss their controversial comments
Crystal, who told a reporter that she would not cater a gay wedding, revealed on Thursday she has never catered any wedding
When asked if they’ll re-open Kevin said he initially shut down because he ‘couldn’t tell if they were getting real orders’ 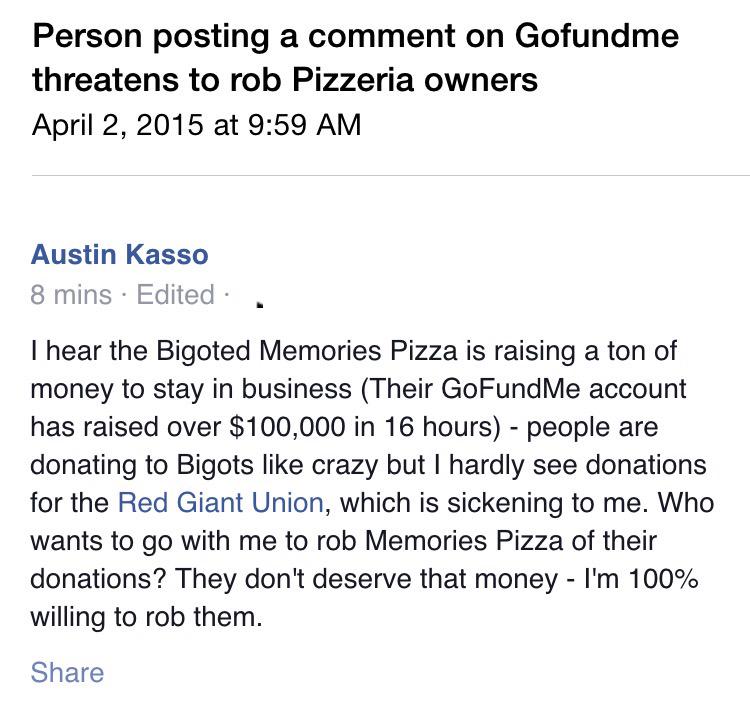 3) Invite local news reporter to ask them about it.

5) Influence liberal media into misreporting what they said.

6) Coax liberal media into wildly misreporting what they said.

8) Watch the money pour in!

Gays and Leftists Are Infuriated That “Gays Are the New ISIS” is trending on Twitter
http://iotwreport.com/?p=280638#S6JlRAV3lwZ4VL41.99

It’s all fun and games when leftists and lefty politicians call the TEA party terrorists when the TEA party has never threatened anyone’s lives.

Memories Pizza has gotten death threats from the imbecilic left because they will not go along with the gay mafia’s Sharia law.

I was as tolerant as the next person, but I’m getting angrier and angrier with this notion that gay marriage must be celebrated or your life is destroyed.

Alix Bryan, a social media employee with WTVR-TV, the CBS affiliate in Richmond, Virginia, is being investigated by station management for filing a false fraud report to GoFundMe against Memories Pizza, a spokesman told The Gateway Pundit on Friday.

Over $700,000 has been raised in just a few days to help the family-owned business that has temporarily shut down after being harassed by totalitarian gay-rights supporters outraged the store said in a gotcha TV interview that in theory it would not cater a gay wedding because of their religious beliefs.

Bryan posted to Twitter on Wednesday evening she was filing a fraud complaint with GoFundMe “just in case.”
When challenged for filing a fraud complaint based on no evidence, Bryan said “that is totally acceptable to do” and that had she looked in to the matter after she filed her complaint.
http://www.thegatewaypundit.com/2015/04/cbs-affiliate-employee-being-investigated-for-bogus-fraud-report-against-memories-pizza/

CROWDER DOES IT AGAIN
HIDDEN CAM: #GayWeddingCakes at Muslim Bakeries?

A BLESSED GOOD FRIDAY TO ALL OF YOU

The regular visitors to our little garden know I’ve had my challenges. I’ve been broken financially, physically and spiritually. I’m cranky, grumpy, sarcastic,cynical and profane. When it seems things are at their darkest, Almighty God says:’Hey, I’ve got your back. I died for you,didn’t I?’ As we struggle to make sense of the chaos going on around us we must remember that He has never, and will never, fail. We don’t understand a lot of things, it is all we can do to follow His example and stay faithful.
Have a blessed Easter weekend and stay faithful.

The Challenge: What is Good about “Good Friday?”

Darkness fell across the land and the man they thought would be their savior cried out in a loud voice, “My God, my God, why have you forsaken me?” Soon after, he breathed his last. The people standing at the foot of the cross beat their breasts and walked away. From a distance, his mother and friends watched in somber silence as all this took place.

His disciples were broken in spirit—no doubt confused, hurting and angry. Disappointed to say the least. They had followed this man for years, left their work and their families for him. They thought he would change everything. But in the course of one day, all of their hopes were defeated.
http://townhall.com/columnists/rebeccahagelin/2015/04/02/the-challenge-what-is-good-about-good-friday-n1979599?utm_source=thdaily&utm_medium=email&utm_campaign=nl&newsletterad=

EVEN CHRISTIANS HAVE A SENSE OF HUMOR