Gearing up for World War III

But Obama wants us to believe that Iran’s nuclear program is only for peaceful purposes.

He also said, “If you like your plan, you can keep your plan.”

The ONLY promise this man has kept is to “fundamentally transform America.”

And he never said CHANGE would be for the better.

April 1, 2015:  Rush Limbaugh on bakery driven out of business by activist homosexual bullying

“It’s 10 people. We researched it. We know who the people are. We know where they live. Virtually 85% of all the so-called outrage e-mails and tweets are generated by 10 people, made to look as though they are thousands and thousands and thousands. It’s all fake. It’s all phony. It’s all part of a left-wing, massive smear operation. …It’s all strategized. It’s all organized. It all has, as its objective, being turned down. They target places that they think this is gonna happen, and then they’ve got their response ready to go to make it look like the whole nation.”

“CALLER: I just wanted to bring up a point that I think everybody seems to be missing when they’re screaming about cakes. This law has nothing to do with discriminating against anybody. All it provides for — whether you’re gay, a person of faith, or anybody else — is that you have standing in court to prove your case. Whether you’re the plaintiff or the defendant in the matter. It has nothing to do with somebody… You’ve got to go through people due process on whatever side of the equation you’re on. I think everybody conveniently forgets that, that’s screaming about wedding cakes.

“RUSH: Yeah, that’s true, but this argument… See, they don’t accept that, because they say that your refusal to serve a cake, bake a cake for a gay couple getting married, that’s discrimination. To you, you are simply behaving according to your religious beliefs, and you do not want to violate them, and you do not want to behave immorally. But you do not have that right. They call that… Fealty, devotion, loyalty, whatever — devotion to your religion — in this context, equals discrimination. Ergo, religion is bad, and it’s for closed-minded bigots and fruitcakes. That’s what they want you to believe.”

“Let Me fill in your day planner.”

“Let Me fill in your day planner” was God’s theme for my prayer-time meditation this morning. Then, I logged on and found an email from my daughter with an enthusiastic link to this blog:

Yesterday was such a beautiful day. SD had some business in town so DW and I were charged with keeping Isabel and Olivia for most of the day. We took them to lunch, then to a park to burn off some of that excess energy. It was the warmest day so far this year, high in the upper 70’s, blue sky and a nice southerly breeze. I didn’t want the day to end because God signaled the annual renewal of life after a long cold spell.

After the children went home I fired up the Univac and what do I see? The government-supported blitzkreig had not only crushed Mike Pence in Indiana, but also Asa Hutchinson in Arkansas. All the republicans cut and ran from the phony charge of sexual discrimination and fell all over themselves to placate the UDSCMA (Union of Dick Smokers and Carpet Munchers of America). For only being 2-3% of the population they sure get a lot of special privileges.

Then an article caught my eye about the Gay Nazi Brigade coming down on a mom-and-pop pizzeria for saying they would serve gays, but not cater homosexual weddings. Excuse me? Who the hell serves PIZZA at a wedding reception? It didn’t matter. It was all the excuse they needed to vent their wrath on a simple business couple.

They got so much hate directed at them, they were forced to close and perhaps never reopen. Ah, but never underestimate pissed-off Christians. Here’s the timeline:

Indiana’s ‘Memories Pizza’ FORCED TO SHUT DOWN Due to Threats After Gay Comments
A Walkerton, Indiana pizza shop told an Indiana news channel they would not provide pizzas at a gay wedding.

The O’Connor family said they were not discriminating against anyone – they just wouldn’t cater at a gay wedding. 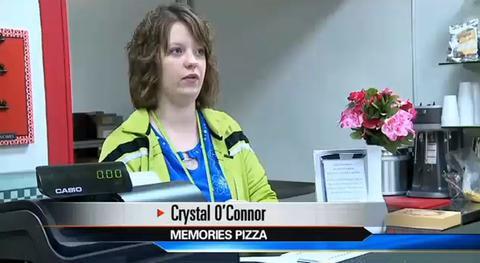 Kevin O’Connor tells TMZ he’s had to temporarily close his business after he told a reporter he would refuse to cater a gay wedding under Indiana’s new Religious Freedom Restoration Act.

O’Connor says he was immediately flooded by threatening phone calls, and social media postings.
A GoFundMe page was set up on Tuesday to help out the restaurant owners.
Already $23,000 has been raised online for the family.

You might have noticed an absolute apoplectic reaction to an article about an Indiana Pizza Shop, Memories Pizza, which is being sold as the “First business (restaurant) to publically deny service to same sex marriage”.

Check out the screenshot from their story. Note the “HEADLINE“, and note the “AUTHOR“:

So curious people wanted to know how this story came about:

AND THAT’S HOW THINGS GET STARTED…..

The LEVEL 7 meltdown is a media driven moonbat narrative:
FOLLOWING ARE MORE THAN A DOZEN STORIES FULL OF IMAGINARY NARRATIVES. IT’S HOW THE MEDIA DESTROYS ANYBODY THEY WANT TO.
http://weaselzippers.us/219240-indiana-pizza-shops-christian-owners-say-they-would-decline-to-cater-at-a-gay-wedding-national-freakout-ensues/

ONE ANGRY, MAN-HATING BUTCH IS BEHIND THE WHOLE THING
ANGRY CHRISTIAN HATING LESBIAN: Coach Suspended After Threatening to Burn Down Christian Pizzeria

This teacher and coach has been suspended after threatening to burn down the Christian pizzeria in Indiana that said they wouldn’t cater a gay wedding.

The head coach of an Indiana high school girl’s golf team has been suspended after apparently threatening to burn down a Christian-owned pizzeria.

Jess Dooley, a coach at Concord High School of Elkhart, Indiana allegedly struck out at the owner of Memories Pizza in Walkerton, IN who made news on Tuesday by saying that she would not cater a wedding if a gay couple tried to hire her for the job, after the state passed its own Religious Freedom Restoration Act.

“We are a Christian establishment,” pizza shop owner told the media.
On the heels of the news from the pizza shop, coach Dooley allegedly took to Twitter to say, “Who’s going to Walkerton, IN to burn down #memoriespizza w me? Agree with #FreedomofReligion bill? “That’s a lifestyle they CHOOSE” Ignorant.”

By Wednesday, the school had reported that the coach was suspended pending an investigation of her comments.
http://www.breitbart.com/big-government/2015/04/01/high-school-coach-suspended-after-threatening-to-burn-down-christian-owned-pizzeria/

IT GETS BETTER
April 02, 2015, 12:43 pm
Supporters raise $140K for Indiana pizzeria
http://thehill.com/sites/default/files/styles/article_full/public/blogs/pizza.jpg?itok=Yw_NEsVr
The Daily Caller reported that Lawrence Billy Jones III launched the funding drive over Memories Pizza’s stance on the Religious Freedom Restoration Act. Jones is an investigative reporter for Dana Loesch, a conservative radio host for The Blaze.
All donations, he said, would transfer to a bank account selected by restaurant owners Kevin and Crystal O’Connor once the cash call ended.
http://thehill.com/blogs/blog-briefing-room/news/237734-supporters-raise-140k-for-indiana-pizzeria

As another Christian leader falls in Africa, thanks very much to the efforts of the Obama Administration and the American taxpayer, willing or not, Boko Haram is celebrating in Nigeria today. That’s because their preferred candidate, General Mohammadu Buhari is now President, and they have very little to worry about.

The truth is, Boko Haram had very little to worry about before the election. Recently, former U.S. Congressman Steve Stockman, who was in Nigeria last summer investigating Boko Haram, confirmed that the U.S. military was prepared to give the government of Christian former-President Goodluck Jonathan intelligence that would have allowed it to crush the terrorist group. This was blocked by the Obama State Department using the excuse that they were holding out for concessions in Nigeria’s position on same-sex marriage. Stockman admits that this makes little sense, because the opposition Muslim candidate, General Buhari, now in power, would be considerably less likely to liberalize laws on any gay-rights issues.

In summary, our U.S. State Department, under the leadership of Barack Obama and SecState John Kerry, so badly wanted the next President of Nigeria to be a 72-year-old Muslim ex-dictator, that they were willing to risk it being known that they intentionally failed to help fight Boko Haram during the height of their brutal reign of terror in that country. This means that they decided not to rescue hundreds of kidnapped schoolgirls married off and converted to Islam against their will. They decided not to help stop the slaughter of thousands of Christian martyrs who refused to convert. They decided to purposely weaken the only leader who had a chance of opposing Boko Haram in the future, and they elected to provide an embarrassingly absurd lie about why they chose to do so.

Why did they do this? What motivated our own leadership to behave in this catastrophic, reckless way? If anyone knows, they’re not telling. But it’s certainly unfortunate for all Christians in Africa that they succeeded this time.