WARNING: THIS MAY BE THE LONGEST HEADER I’VE EVER DONE, BUT IT’S MOSTLY VIDEOS, SO BEAR WITH ME

Volumes have been written and will continue to be written about the latest illegal atrocities committed by the Butcher of Benghazi,hereafter known as BB,since I get sick of typing the bitches name. The sycophantic media are feigning outrage and speculating loudly that her using a private e-mail server to conduct all her official government business so she could hide anything she wanted will cost her the democrat nomination and ultimately the presidency. Not only am I skeptical, I’m as sure as ever that this won’t deter her even a smidgen.

It will be more than a year until the 2016 race begins in earnest. That’s a thousand lifetimes to a citizenry with an attention span of less than thirty seconds. Plus,she is a vicious infighter with an army of attack dogs ready to defend whatever they do. Bottom-feeding sludge like Carville, Lanny Davis, and Paul “the forehead” Begala. They’ve all done this before. Only once has Bent Penis been made to account for his criminality, and don’t doubt for a minute if Monica Lewinsky hadn’t kept the dress with his special sauce on it, she’d have been skewered by the Nuts and Sluts Brigade, headed by none other than BB.

Kevin Williamson from National review sums it up pretty well:

“Hillary Clinton is not going to prison. She’s going to release whatever emails she feels like releasing and dare any of you peons or your elected representatives to try to make her do otherwise. You’ll take what she offers, and you”ll like it. …

“A self-respecting people would have sent this clan of scrofulous grifters and po-faced con artists into whatever passes for exile (comfortable exile, of course) in the 21st century. Instead, we are giving them a serious shot at a return to the White House.

“At least this time, we’ll know to keep an eye on the silver.” — Kevin D. Williamson

Fox’s Wallace Grills Lanny Davis : Do You ever get tired of Cleaning up after the Clintons?
A PROFESSIONAL LIAR REEKING OF ROTTEN FISH

Lanny Davis, who was most likely sent out to the cable shows by Team Hillary, keeps telling MSNBC’s Tamron Hall, what about Jeb Bush? What about Colin Powell? He gets angry over some very legitimate questions about Clinton here…

WHAT A CLASS ACT

Clinton supporters have pushed back against the media and Republicans, waving off the stories as yet another Twitter-fueled much-ado-about-nothing that has little resonance with the typical voter beyond Washington.

“Voters do not give a sh-t about what email Hillary used,” said Democratic strategist Paul Begala, a longtime Clinton ally and CNN contributor. “They don’t even give a fart.”
http://www.truthrevolt.org/news/clinton-ally-voters-dont-give-sht

LIES AND THE LYING LIARS WHO LIE ABOUT IT
CBS: When Did You Learn About Hillary Emails? 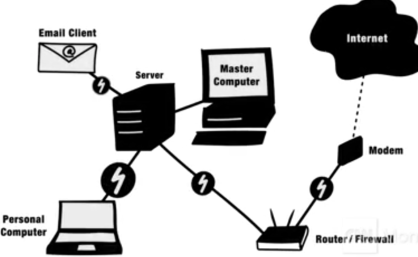 Unless Clinton is a secret tech guru, she probably didn’t do this on her own”

CNN Money says there are only 2 kinds of people who want a private email server, IT geeks and the people who worry about governments and companies spying on their mail.

Conclusion: Anybody who wants her emails, would have to go through her first

WITH THE KLINTOONS, NOTHING HAPPENS BY ACCIDENT

Clinton was considering holding a news conference in New York in the coming days to address the email controversy directly, according to a person familiar with her thinking. The person spoke on condition of anonymity and was not authorized to speak publicly. The potential news conference was first reported by Politico.
http://weaselzippers.us/216593-wow-at-highly-choreographed-clinton-foundation-event-participants-during-informal-conversation-read-from-teleprompters/

NYT: Vulnerable Hillary ‘Could Easily Lose’ in 2016
ONLY IF ILLEGALS AND TENS OF THOUSANDS OF BLACKS ONLY VOTE FIVE TIMES INSTEAD OF TWENTY
THE MEDIA WILL DO MUCH HAND-WRINGING AND NAYSAYING UNTIL THEY NEED TO CIRCLE THE WAGONS TO PROTECT THE ONLY VIABLE CANDIDATE THE LEFT HAS

He notes that though the conventional wisdom after Obama’s reelection was that Clinton would be an “unusually formidable general election candidate” based on her high favorability numbers after she left the State Department, Clinton’s “popularity has already faded considerably over the last two years. Her support could erode even further as the campaign unfolds, or as she comes under new scrutiny, be it for foreign donations to the Clinton Foundation, her private email account as secretary of state or new issues.”
http://www.breitbart.com/big-government/2015/03/09/nyt-vulnerable-hillary-could-easily-lose-in-2016/

Mark Halperin: Clinton Is No Longer 2016 Favorite Due to Awful Response to Email Scandal
ANOTHER LEFTIST HACK CHIMES IN

Pulitzer Prize–winning columnist George Will nailed the Clinton political dynasty during an appearance on Fox News Sunday, describing the Clintons as “the kind of people who could find a loophole in a stop sign.”

Will also characterized likely 2016 Democratic presidential nominee Hillary Clinton’s use of private email accounts and a private server as an “Orwellian” attempt at control.

Ron Fournier: Clinton Email Controversy a Scandal for “Anybody With a Brain”
FORTUNATELY FOR DEMOCRATS, THEIR VOTERS ARE NOT SO EQUIPPED

History Lesson: President Hillary Clinton Would Be Secretive, Too

News that Hillary Clinton exclusively used a private email account to keep secret her communications as Secretary of State should surprise no one. She came to Washington more than 20 years ago determined to keep secrets, and she’s still at it.

The Rules According to Clinton: 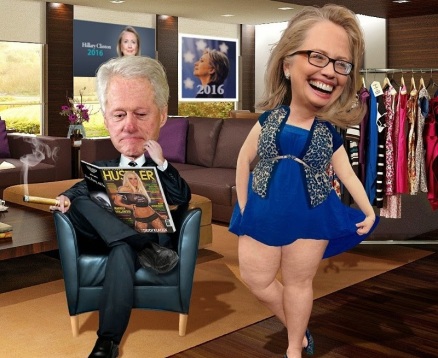 “Hillary Clinton hasn’t even begun her expected presidential candidacy, but already Americans are being reminded of the political entertainment they can expect. To wit, the normal rules of government ethics and transparency apply to everyone except Bill and Hillary. …

The real story here is that none of this is a surprise. This is how the Clintons roll. They’re a political version of the old Peanuts cartoon character who was always surrounded by a cloud of dirt. Ethical shortcuts and controversies are standard operating procedure. A brief 1990s roll call: The Riadys, Johnny Chung, Travelgate, the vanishing Rose billing records, a killing in cattle futures, the Marc Rich pardon.

The Clintons and Democrats want Americans to forget all of that. But as the email and foundation discoveries show, the Clintons haven’t changed. They still think they can do what they please and get away with it.” — The Editors, The Wall Street Journal

EVEN SNL HAD A LITTLE FUN (WITH BB’S APPROVAL,NO DOUBT)

Then she spoke about her controversial, unethical and potentially illegal personal email accounts while at the State Department.

Hillary said she gave investigators 55,000 pages of emails to Congress.

Hillary says she did not turn over her personal emails on yoga routines(?)

“Looking back it would have been better for me to use two separate accounts and separate phones.”
(It was the law.)

Hillary says she is very proud of her foundation that accepts funding from brutal regimes that oppress women.

“There can be no mistake for her passion for women’s rights.”
Tell that to the women in Afghanistan.

Hillary insists she did not delete any pertinent emails.
So we’ll just have to trust her.

SHE KNOWS SHE HAS NOTHING TO FEAR FROM THE PRESS.THEY ALL KISS HER UGLY ASS 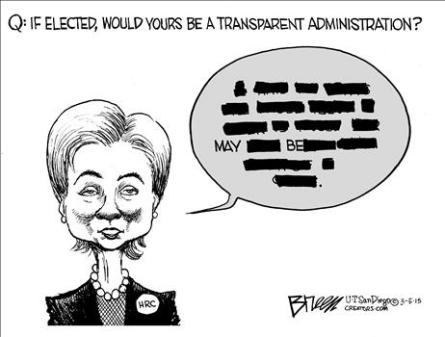 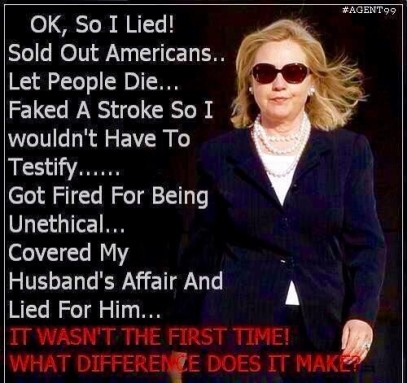 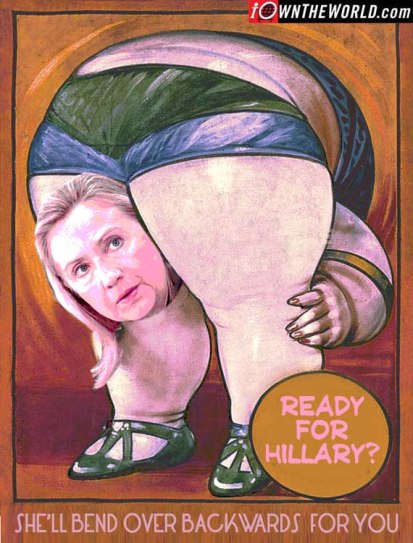 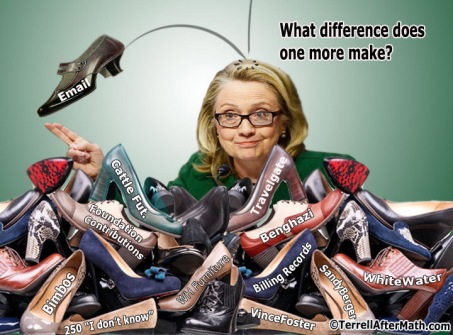 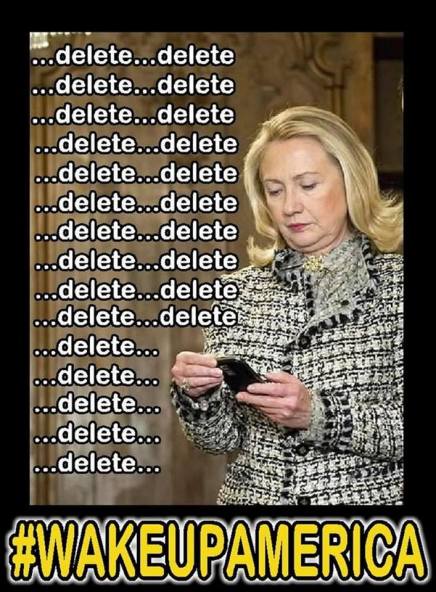 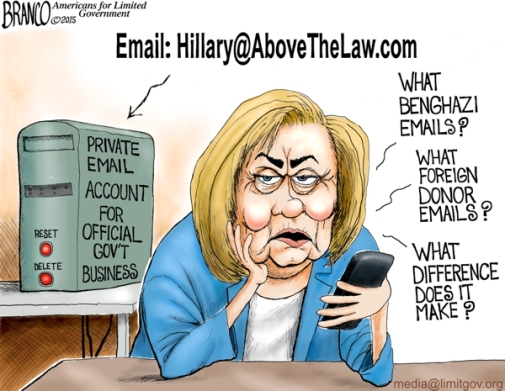 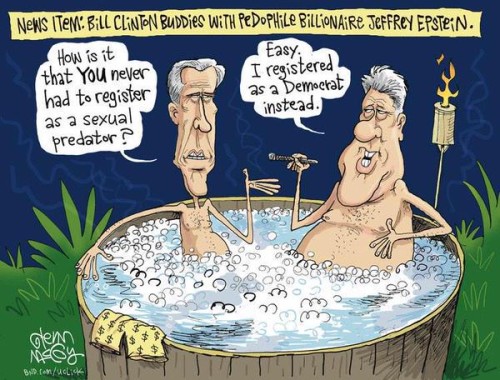 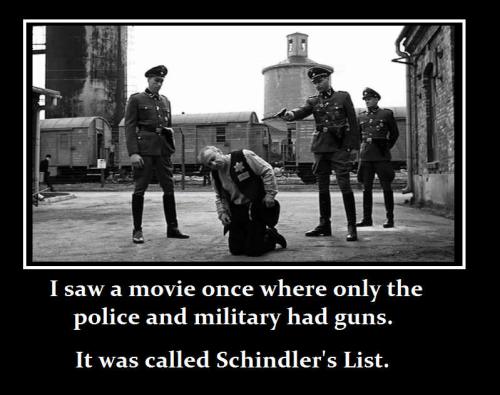 OK, SO THIS POST IS LONG, CLUNKY AND DISORGANIZED. SO AM I… EXCEPT FOR THE LONG PART.

16 responses to “THE UNSINKABLE HILLY CEE”