Ferguson could have healed if they’d been left alone to do so. The autopsy of Michael Brown’s body supported the officer’s account of the shooting, that Brown had resisted arrest and tried to grab the officer’s gun off of him.

So how did it turn into a national flashpoint for RAAAAACISM and all that “hands up” crap?

Progressive MONEY … including $33 Million donated by Billionaire George Soros to bus in professional agitators, demonize the police officer who shot Michael Brown in self defense, and keep Ferguson in the headlines. The Soros cash was also put to work driving social media campaigns using buzzwords like “hands up, don’t shoot” and “black lives matter.”

Soros is an out-spoken proponent of the Progressive agenda and this Ferguson agitation is straight out of the Frankfurt School playbook.

“The Frankfurt School believed that as long as an individual had the belief – or even the hope of belief – that his divine gift of reason could solve the problems facing society, then that society would never reach the state of hopelessness and alienation that they considered necessary to provoke socialist revolution. Their task, therefore, was as swiftly as possible to undermine the Judaeo-Christian legacy. To do this they called for the most negative destructive criticism possible of every sphere of life which would be designed to de-stabilize society.” 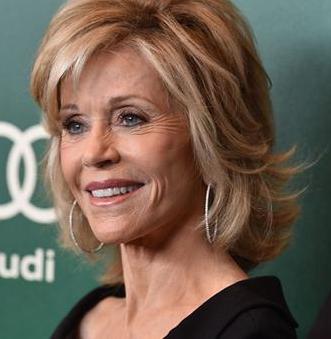 Gruntington Post [United Nations] – Hollywood actress, radical and war criminal, Jane Fonda, was interviewed on Wednesday by the Associated Press prior to United Nations meetings next week where she will speak about progress toward women’s equality.  Her message?  “The most intractable problem that humanity faces is the problem of Patriarchy,” which she blames for the rise in terrorism and the destruction of the environment throughout the World.

Miss Fonda declined to specify the identity of this new “Patriarchy” person, but from her description, he appears to be some kind of superhuman terrorist leader.  Her comments make it unclear, however, if the person is even a human being.  He’s clearly a male of some species, but she also described him as a “beast, thrashing about, flailing its tail with the barbs on it, and a lot of people are really getting hurt badly.”  Some are speculating that the name implies some supernatural aspect, perhaps even an archangel of some kind.

This theory is consistent with a figure from one of her past movies, Barbarella, in which an adversary took the form of a winged man.  Miss Fonda is pictured above with Pygar (note the name also starting with a ‘P’).  Clearly, she is in some form of distress and helplessness before the power of Pygar, now possibly called Patriarchy.  Oddly, her character is not always so helpless in the presence of the winged creature, as illustrated by the movie still, below right. 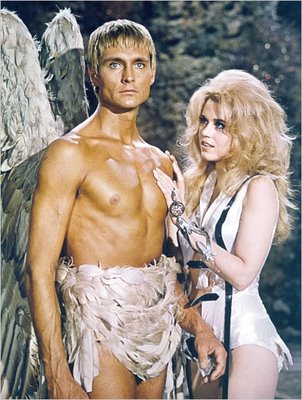 Miss Fonda also commented on the need for strong female world leadership.  Changing laws “is a huge step forward” and helps empower victims, she said, but to achieve equality many other things are needed as well.

“You need women elected to office, you need movements in the streets, you need social media, you need every single form of social protest and speaking truth to power that’s possible,” Fonda said.

And a woman leader must lead “as a woman and not as a man in skirts” who thinks she needs to prove she’s not weak, she said.

Her value “is to bring her woman-ness to her leadership style” which means empathy, compassion and “someone whose head and heart are not bifurcated,” she said but then exclaimed, “Oh shit.  Did I just use the word ‘bifurcated’?  I was saving that for the UN speech.  I didn’t also just say ‘intractable’ did I?”

Go to TowhHall.com to see more of her interview where she really does say most of these things.

Spring ahead tonight before you go to bed, so you will be on time for church tomorrow morning.