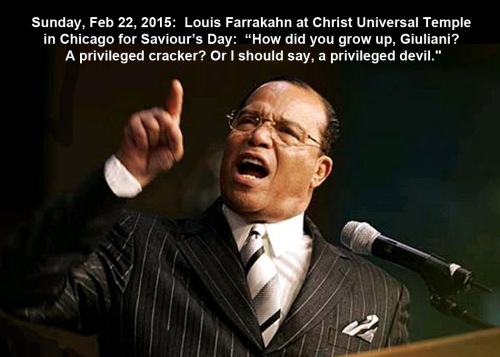 Farrakhan said, “How did you grow up, Giuliani? A privileged cracker? Or I should say, a privileged devil.”

Cracker? Devil? Really? In church? On a Sunday?  Plus, can anyone explain to me why this man, who HATES America, should have some problem with someone else saying that maybe his bff in the White House might not love America?  I mean … seriously?!

Does anyone else remember when the press made a big honkin’ deal about a prayer Sarah Palin offered at her church for our troops in harm’s way? Cuz yeah … THAT was really terrible. :oP

As for “privileged devil” … puh-leeze.

8 responses to “Farrakhan vs. Giuliani”