When a President needs on-the-job training

Below are 11 major statements that Barack Obama has made about our military in Iraq:

FIFTY SHADES OF GARY – A REVIEW 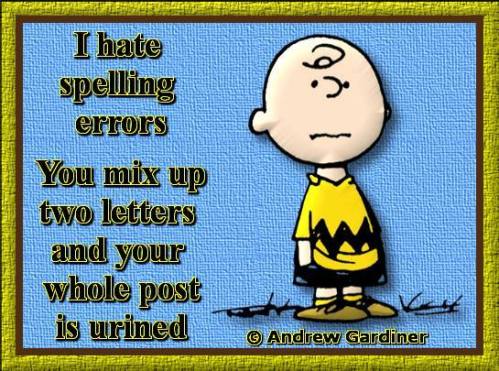 JUST KIDDING;I don’t know who this Gary character is or why progs are dampening their underwear in anticipation of throwing down fifty bucks for tickets and popcorn to see whatever it is this Gary does. My beloved child bride and I went to a movie last year and may not go to another for years. We have all the premium channels and anything we want to see will be there eventually. I just have a problem paying money to see a bunch of high school dropouts making millions of dollars saying lines somebody else wrote and thinking that makes their political opinion superior to everybody else’s.

We’re having a movie night tomorrow night all right,with our favorite overnight guests,Miss Isabel and Miss Olivia. We’ll either watch Frozen, Planes ,or my favorite, Over The Hedge. Their favorite tape,actually,is a VHS I have of Christmas cartoons from the 30’s and 40’s. They watch it almost every time they’re here. We’ll enjoy their favorite supper,hot dogs and mac and cheese,then they’ll cuddle with grandma (I’m not as upholstered as she is) and have the kind of good time money can’t buy.I can’t ask for any more.

Here is a review of ‘Fifty Shades’…apparently they spelled the name wrong. There are pictures in the article,but I won’t post any. They’re not worth the bandwidth.

BoB has too much class to brag on her grandson,Kiran. I however,do not suffer such an affliction. Her precious is already a month old. And,I trust,spoiled rotten. This is what life is all about. 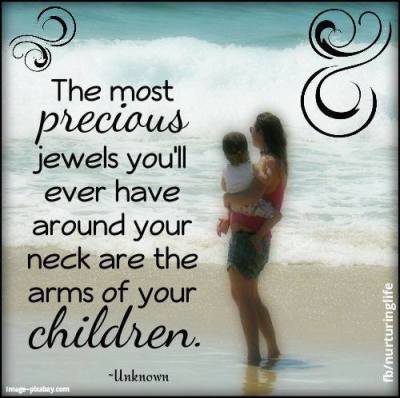 I did this when I was unhitching my fishing partner’s boat once. The pain was exquisite.

Hoping this is the LAST time I write about Lyin’ Brian

No, I’m not obsessed.

I’m outraged that an uneducated, narcissistic liar ever had the trust and power to choose what, when and how We the People were informed.

Freedom of the press is one of the great glories of our system; lying journalists put that, and all our other freedoms, in grave jeopardy, so no, I will NOT be silent about this.

That being said, I am sick to death of the smarmy jerk, so hopefully this is the LAST time I have to even think about him. 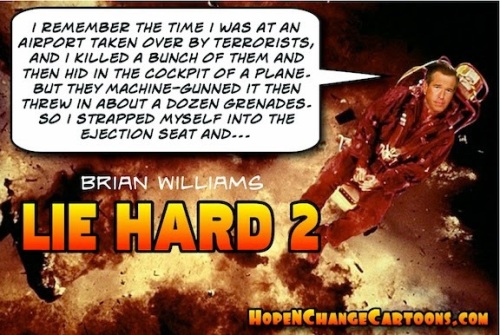 In a 2007 interview with Fairfield University Student Television, Williams recalled “Katyusha rockets passing just underneath the helicopter I was riding in” during a trip to Israel in 2006.

In fact he was nowhere near enemy fire. In a broadcast segment he filmed the day of the alleged incident, he described rocket fire as being “six miles away.” 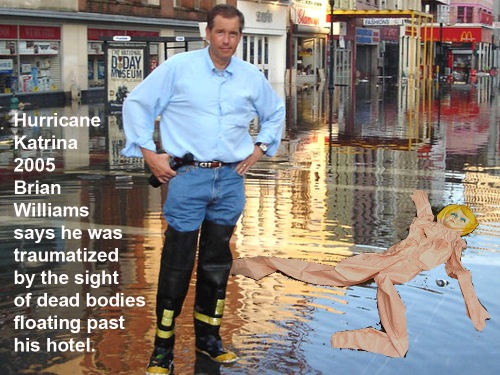 Williams has told several stories about his experiences reporting about Hurricane Katrina from New Orleans in 2005.

Williams claimed to have seen a dead body float past the window of his hotel in the city’s French Quarter.

The French Quarter never got more than a few inches of flooding, certainly not enough for any dead bodies to “float past” his window.

Williams claimed his hotel has been ‘overrun’ with gangs.

The manager of the Ritz-Carlton where he stayed was honored by the company for her exemplary foresight and planning that had made the hotel one of the safest places to be in New Orleans.

Williams claimed he got no medical treatment.

The Ritz-Carlton manager had set up an impromptu “MASH unit,” stocked with medicine from a nearby Walgreens and manned by more than a dozen doctors. She said there was more than enough medicine and doctors to see to him if he had truly ever been ill.

Lyin’ Brian – He has a good imagination

If only he’d stuck to writing fiction. 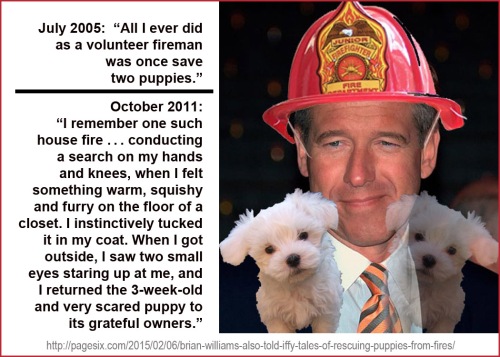 In 2011, Lyin’ Brian Williams wrote a piece for which USA Weekend used this headline:

Williams looks back on being a volunteer fireman and the wildfire of good he hopes to set now
You may find that making a difference for others makes the biggest difference in you.

“On the day I became eligible, I signed up to be a volunteer firefighter in my hometown of Middletown, NJ. … My firehouse was a modest engine company — three engines, three garage doors and about 30 of the best men I’ve ever known. We fought all the usual fires that break out in the suburbs: brush fires, car fires, dumpsters, dryers, light fixtures — and worst of all, the occasional house, already in flames when we arrived. I remember one such house fire — the structure was fully involved with flames and smoke. I was wearing a breathing apparatus, conducting a search on my hands and knees, when I felt something warm, squishy and furry on the floor of a closet. I instinctively tucked it in my coat. When I got outside, I saw two small eyes staring up at me, and I returned the 3-week-old (and very scared) puppy to its grateful owners.”

According to Jordan Schachtel, a graduate of Monmouth County Fire Academy, there are more inconsistencies in Williams’s story than just how many puppies he allegedly rescued.

First and most compelling is that Williams’s own bio says, “While in high school, he was a volunteer firefighter for three years at the Middletown Township Fire Department.” According to Schachtel, volunteer fire departments do not let anyone go near a fire until they are at least eighteen years of age.

“A brush fire is one thing, but a house fire with flames and smoke blowing out of every window is an entirely different ballgame.”

Even if he’d ever been allowed inside a house on fire, his description of opening up his coat “violated basic protocol and common sense”, making it highly unlikely Williams was ever trained in search and rescue, much less allowed inside a burning house.

Also, Williams said he volunteered for an engine company.  Searching for victims is the job of a truck or ladder company, not an engine company, though Schachtel admits that in a small fire department, such duties may not be so sharply defined.

Maybe what really happened is that Teen Brian was put on some safe duty, like keeping gawkers behind the line, and he saw a fire fighter save a dog and then fantasized about how it was he who had crawled into the hot smoke and had the grateful (and no doubt attractive) dog owner gush her thanks all over him.

Comments Off on Lyin’ Brian – He has a good imagination

I believe God hates LYING more than anything

There are SIX things the Lord hates,

yes, SEVEN are an abomination to him;

A heart that plots wicked schemes,

feet that are quick to run to evil,

the FALSE WITNESS who utters LIES,

and the one who sows discord among kindred.

Comments Off on I believe God hates LYING more than anything

Lyin’ Brian has been suspended for 6 mos without pay 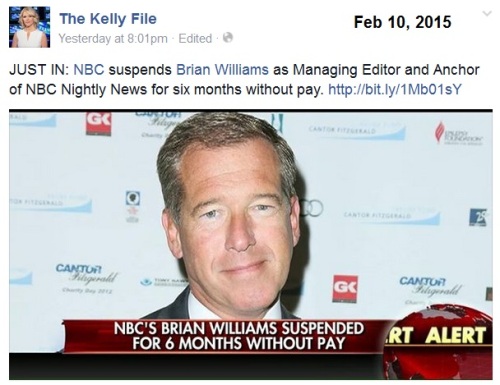