Breitbart – A modern American president lives in a bubble of security, mostly shielded from the rest of the country. But that doesn’t protect the Obamas from racism, the First Lady says in an exclusive interview with People magazine.
Oh yeah. This’ll bring the country together…

Those of us paying attention to End Times prophecy have heard a lot about the current Blood Moon Tetrad.  I’ve read conflicting accounts and confusing accounts and inaccurate accounts of what it is and what it may or may not signify with regard to Jesus’ Second Coming.

So I did my own research.

When Christians speculate about the significance of the current Blood Moon Tetrad, they’re not talking about ANY four total lunar eclipses in a row. They’re talking about only those that coincide with the Jewish holidays of Passover and Sukkot.

At the NASA website, there is a page called “Six Millennium Catalog of Lunar Eclipses” on which the number of Blood Moon Tetrads per century is given for every century from 3,000 BC to 3,000 CE.  As you can see here, four lunar eclipses in a row are unusual, but nothing like as rare as I’ve heard claimed.

I looked at every one of the tetrads since Jesus’ First coming and found only eleven during which the eclipses coincided with the beginning of the Jewish holy weeks of Passover (sundown Nisan 14) and Sukkot (sundown Tishri 14). 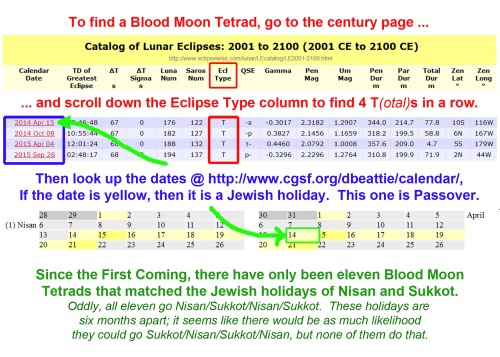 These are the only eleven tetrads since Jesus’ First Coming that coincided with Passover and Sukkot.

The interest in Blood Moon Tetrads is based on these End Times prophecies:

There is nothing about any tetrad of red moons, so while the current tetrad is interesting and unusual, it is not enough on its own to say “The End Times Are Here!”   For one thing, we also need a total solar eclipse, so I looked at the NASA solar eclipse site to see if I could eliminate any of the eleven tetrads. 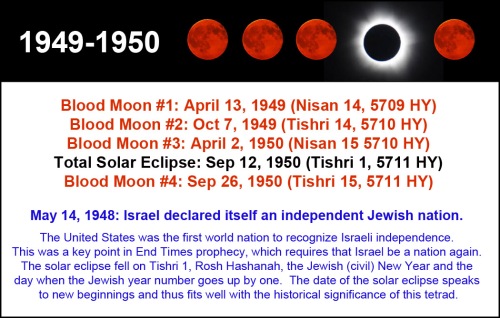 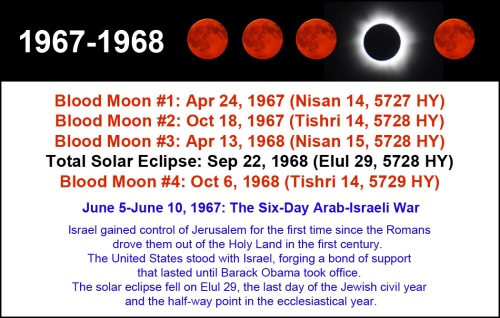 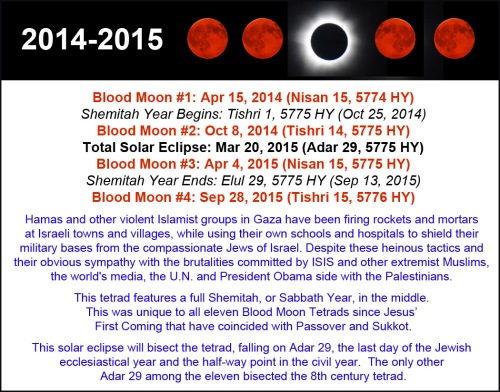