Oh, THOSE WMD; Sure, there were some of THOSE

Now that ISIS is taking control of deadly chemical weapons in Iraq that are left over from Saddam’s hidden stashes, and our media is reporting it, isn’t it time to point out the shamelessness of this 14 year media conspiracy that painted President Bush as a liar and warmonger for going into Iraq after ‘non-existent’ WMDs? In fact, shouldn’t we be keeping track of the lies, like we do the deficit?

Greatest U.S. Media Lies and Conspiracies of the Last 100 Years:
1. Walter Duranty’s NY Times Pulitzer for deceiving the public about Stalinist Communism for decades.
2. Anthony Lewis’ and NY Times’ defense of Pol Pol and Khmer Rouge.
3. Media campaign to promote the scientifically discredited cause of climate activism.
4. Media campaign to protect the morally discredited Fascist political system of Islam from all scrutiny.
5. Media campaign to destroy and imprison the administration of a sitting Republican President in the early 70s (for knowledge of a burglary) while systematically covering up egregious criminal activity of Democrats (including murders, like Vince Foster’s) for 50 years.
6. Relentless 10 year frenzy of lies and diversions that established, falsely, that the Bush Administration had no reason to defeat Saddam Hussein and prevent his cache of chemical weapons from being used.
7. Media campaign to elect a talentless, radical community organizer to the Presidency and then protect him from all criticism as he completely destroyed every part of the U.S. that didn’t resemble or function like Zimbabwe.
8. What Constitution? We have a Constitution? Our President doesn’t need no stinking Constitution. 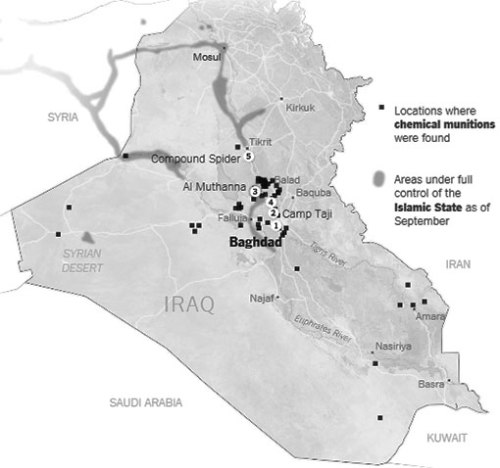 From the Weasel Times and Stoat Intelligencer:
Okay, that NY Times article about chemical weapons today. Help me out here. They put this together from a bunch of Wikileaks stuff and some FOIA requests. It shows that US soldiers were finding chemical weapons regularly from 2004 and 2011 and some were hurt by them.

And the Times is scolding the government for downplaying the danger and significance of chemical weapons? WTF happened to “Bush lied, people died”? Yeah, they’re describing them as a bunch of old crappy weapons (and of American design, woooo!) but isn’t that entirely in line with what we expected to find and were told we hadn’t? Tens of thousands, by the sound of it.

And why did the military downplay this? Why did the government?

And why is the Times doing a bunch of original reportage on this now? Could it be that ISIS is closing in on this stuff and they want an alibi when the bad guys start lobbing chemical weapons around…?  Read more at sweasel.com.

Andrew Klavan: Helping the Pro-Obama Media Learn From the Past [3:41] 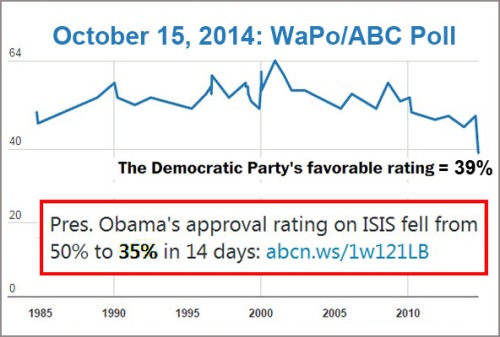 “The progressive pajama boy era is over. … Now instead of pivoting from Global Warming to a minimum wage to some offensive thing that some local Republican somewhere said, the media is stuck in an Ebola-ISIS cycle that reminds Americans on a daily basis that everything really is out of control. … Obama is already receding into the imagination of liberals as the youthful folly of a political Age of Aquarius when millennials tried to levitate the Pentagon by electing a brash inexperienced community organizer to fix the world.”

Sadly, the cure Dems are likely to propose for 2016 will be “Elect Hillary because she’s old and butch and has a vagina.” 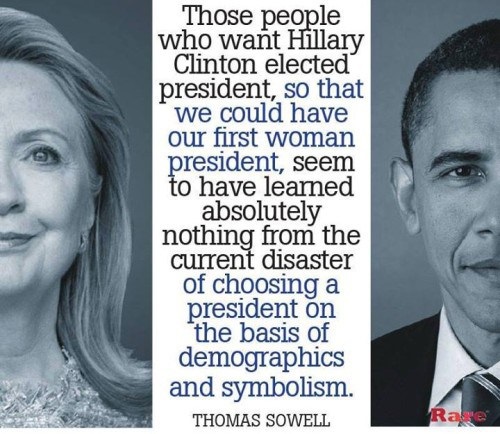 Comments Off on Wave buh-bye to the nice Pajama Boy, kids!

And they said Bush was evil and incompetent ::coughcough:: 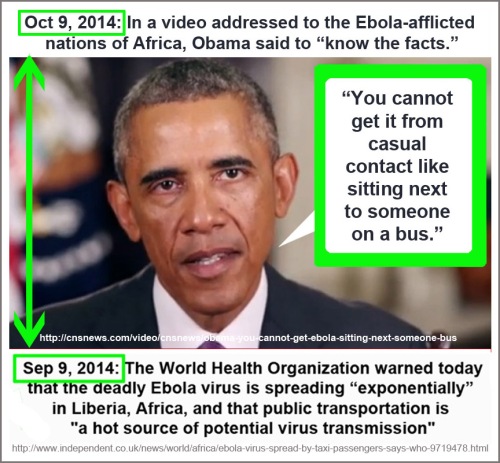 It seems scientists know very little about the strain now in circulation, apart from the fact that it is particularly virulent.

But no fear! The Obama CDC is sticking with the official narrative that you can keep your health if you want to!  Aren’t you reassured?

Obama’s actions appear to be designed to ensure the spread of the disease as soon as possible. For example, the CDC claims that security screening at West African airports is working just fine, even though that is how the first U.S. case arrived here.

While Obama refuses to bar air travel from infected countries to the United States, Sierra Leone ended their outbreak with one and only one case. The infected person arrived from Liberia and the government locked down the nation. There has been no spread of the disease and the infected person even recovered.

Personally, I think that as long as Obamacrats do not personally lose their fortunes or their health, they are perfectly happy to see war, plague, famine and death spread from sea to shining sea. 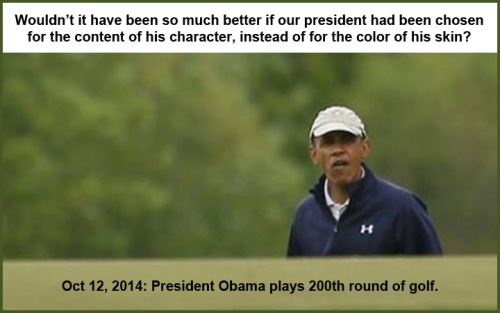 For more information about what you can do to protect yourself, go to http://www.biodefense.com/.

Oct 9, 2014 – Virus researchers say Ebola could spread through air – and even spread without symptoms
http://www.naturalnews.com/047191_Ebola_airborne_transmission_symptoms.html

Week Seven of a Nine Week Mission, to Seek new life for the Senate, to Boldly shuttle Harry Reid back to irrelevance! 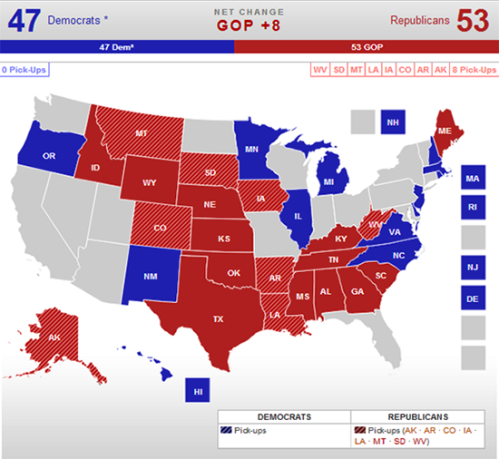 Focusing on the Senate races, is it worth ten bucks a week to you (the cost of a single one of Barack’s Presidential golf balls?) to eliminate Reid’s control and give the Senate responsible leadership again?

With that in mind, this week we look to the Senate seat in Colorado. Can you contribute just $10 to Senate candidate Cory Gardner?

Real Clear Politics has Gardner up 3.0 and rates the race as a toss up.

You can contribute to Cory Gardner here. Good luck and Godspeed, Cory!

If you are unable to make a contribution, you can help the candidate(s) tremendously by encouraging friends, family, neighbors and/or co-workers to vote. Volunteer your valuable time. Put up a campaign sign in your yard. Make sure you go to the polls. We cannot afford to sit this election out.

(If you mark your contribution as “Ten Buck Friday”, they’ll see if the blogosphere can give them a little bump.)

For God, Family and Country 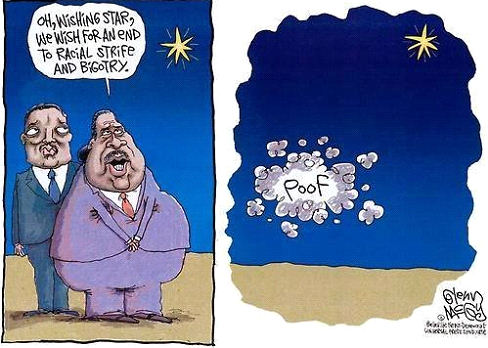 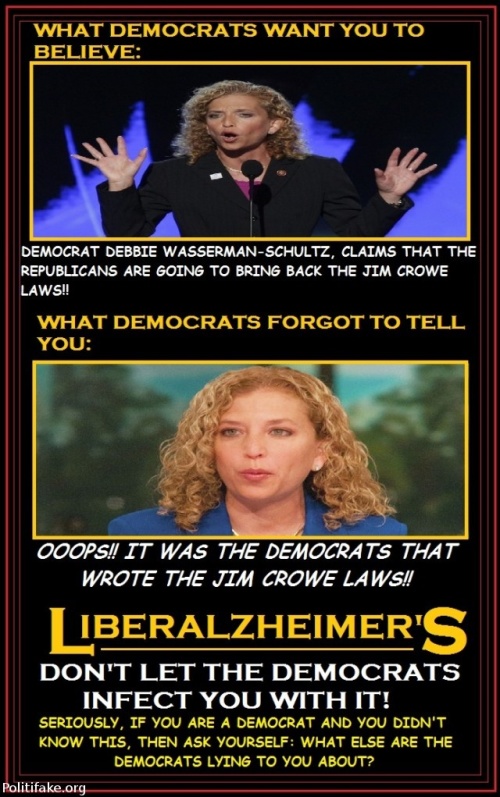 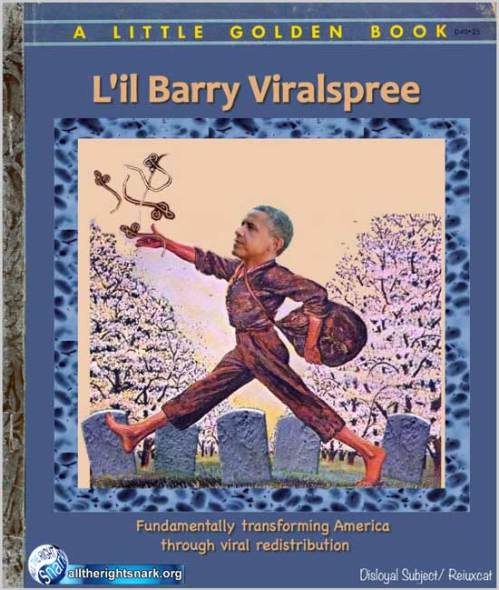 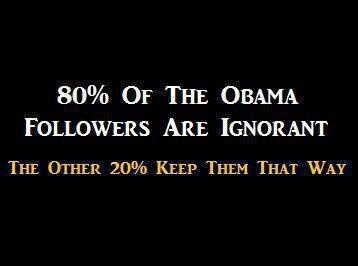 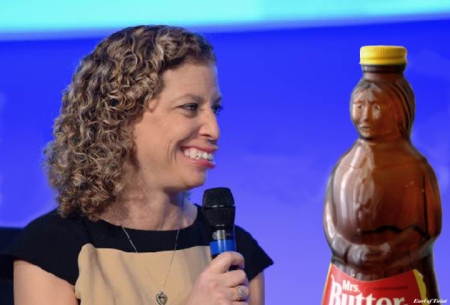 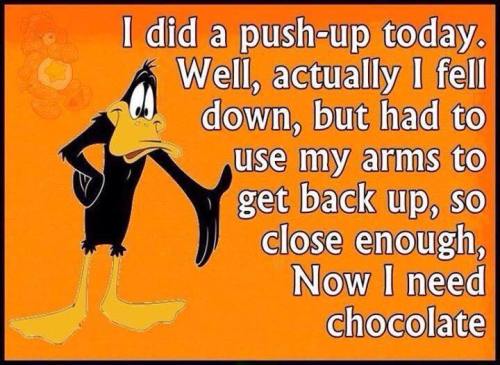 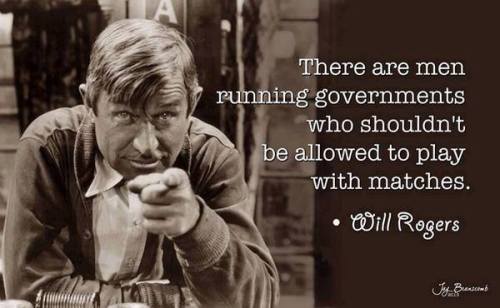