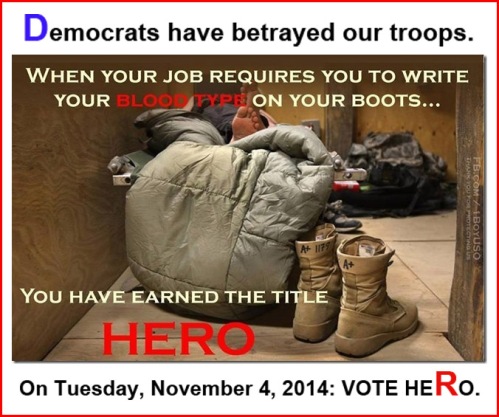 When Bush was in office, we heard about military deaths in Iraq and Afghanistan almost daily. The print media published rows and rows of dead soldier photos; the broadcast media interviewed Gold Star Moms weeping; and Democrats running for office chanted off “Bush’s” death toll.

Oddly, after Bush left office, the media and all those weepy Democrats fell silent, despite the fact that our soldiers have continued to fight and die in the Middle East.

Call me cynical, but I think the Left-biased media and the very Left-wing Obamacrats in power don’t actually give a toot about our troops. It was only when a REPUBLICAN was in the White House and another pro-military REPUBLICAN was running to replace him that they pretended to care.

In short, soldiers fighting and dying in military actions sanctioned by a DEMOCRAT president are of no interest to them. The real truth is that Democrats HATE Republicans and will say and do ANYTHING to get and keep power.

Democrats have a long history of short-changing our troops’ benefits and selling them out on the battlefield. This is why most of our soldiers vote Republican. More than 1,000 American soldiers have lost their lives in Afghanistan JUST in the last 27 months! This is more than the combined total of the nine years before. Have you heard a word? No. Why not? Because Democrats DON’T CARE ABOUT OUR TROOPS.

Right now, the Commander In Chief is AWOL. He is not merely indifferent; he is incompetent. He ordered the White House flag flown at half-staff for Sikhs that were killed, but he has done nothing but lie and cheat and stall on issues that matter the most to our nation’s finest.

Since taking office, he has failed to even ATTEND half of his national security briefings and when he does bother to listen to his experts, he does the opposite of what they recommend. Then, as we saw (again) this week, when things go badly, he blames everybody but himself.

The 9/11 attacks were in the planning for FIVE YEARS.  George Bush had been in office EIGHT MONTHS when they occurred.  If anyone was responsible for emboldening Al-Qaeda, it was the Democrat in office before Bush, Bill Clinton.  Funny thing about his wife being Obama’s Secretary of State for the Benghazi attacks, isn’t it?  Makes you think maybe Democrats are really BAD at this foreign policy, national security stuff.

Bush was in office for more than 7 years after 9/11.  During that time, there were no terrorist attacks on America.  Obama and the Democrats who took control of Congress in 2007 all campaigned on the idea that Bush had gone about this whole Global War on Terrorism thing all wrong.  In fact, he was a new Hitler!  A bloody murderer!  ACK!  Put a Democrat in charge and see a kinder, gentler world evolve before your eyes.

Riiiiiiiiiiiiiight.  Obama has had 6 years to prove to us that he was capable of keeping us safe from Muslim extremists.  During this time, he has vacationed, golfed, campaigned, bowed to foreign leaders, armed terrorist and generally ignored the plight of our men and women in uniform (except when he wanted them for a photo op).  For crying out loud, he labeled the Fort Hood shooting “workplace violence”, renamed terrorist attacks “man-caused disasters”, and insisted that Muslim extremists aren’t Muslims!

Obama has made the Rules of Engagement (ROE) so difficult, that our troops are often killed before they can even get permission to fight. Nothing has been done to stop our troops from being murdered by the Afghanis they are training, either.

Now … would you believe? … President Obama wants the US to sign on to the UN’s International Criminal Court (ICC), which would allow the UN’s ICC to arrest and try US troops for War Crimes, without the legal protections guaranteed under US Law, and from which there is no appeal!

With the White House AND the Senate in the hands of Obamacrats, pro-military Republicans can do very little to help our troops. The Republican-majority House of Representatives has passed literally HUNDREDS of bills, many with strong bipartisan support. Senate majority leader, Democrat Harry Reid, throws them in the trash. He won’t even allow them to come to the floor of the Senate for DISCUSSION, never mind a vote.

And who gets the blame, again and again, for the “do nothing Congress”? Republicans. But it is the DEMOCRAT LEADERSHIP that is blocking everything Americans want to get done.

Our troops are getting screwed. But with Obama backed up by Reid’s Democratic majority Senate, the military-hating Left has nearly all the power. We MUST take back the Senate in 2014 so our troops can once again be protected from unnecessary danger.

Please consider this plea as signed in the blood of all the soldiers who have died in OBAMA’S WARS. Then send it on to your mailing lists. Thank you and God bless.

One response to “On November 4, VOTE HERO”