September 17, 2014: The House Select Committee on Benghazi opened its hearings with Chairman Rep. Trey Gowdy [R-SC] vowing to pursue the facts wherever they lead. This brief bit of testimony by Todd Keil is very, very telling.

After the bombings of embassies in 1998, new regulations were created for high-risk diplomatic posts like the one in Benghazi. Facilities are assigned specific designations which then dictate which level of security is to apply. Responsibility for implementing security regulations belongs to the Undersecretary for Management, a post that is currently held by a career diplomat named Patrick F. Kennedy (no relation to the political clan).

Security practices expert Todd Keil said during his testimony to the House Benghazi Committee last Wednesday that, prior to the assault, Undersecretary Kennedy changed the security designation for the Benghazi facility to “Special Mission Compound.” This designation is unique to the Benghazi consulate. IOW, it’s made up. As such, there are no regulations dictating what security Kennedy was required to maintain there. 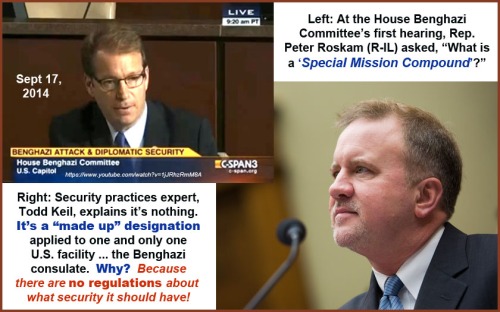 I am firmly convinced that the real plan in Benghazi was to set the stage for the 2012 version of the sadly expectable “October Surprise” Democrats seem to plan for every election. I believe that the security at the Benghazi compound was purposely denuded as part of an agreement between Obamacrats and Muslim terrorists to invade the unprotected consulate and kidnap Ambassador Stevens.

I think Obama’s negotiations were then supposed to dominate October headlines and result in the release of high-level Muslim leaders from GITMO and a landslide victory for Barack “I Saved the Ambassador” Obama on Election Day.

What other scenario could possibly explain a high-risk consulate that was BEGGING for MORE security having their existing security REDUCED from 30 to 9 in the last few weeks immediately prior to the assault?  What other scenario could possibly explain why the nearby Americans with guns were told THREE TIMES to sit on their hands while our consulate was under armed assault?!

While Undersecretary Kennedy seems to have been complicit in this putrid scheme, I am inclined to believe that SecState Clinton either blackmailed or threatened him and that he caved only because he was assured that the consulate staff would come to no harm. Why do I think this? Because he is not a party hack. He is a long-time career diplomat who has worked in the Middle East and was very likely acquainted with, if not actually old friends with Ambassador Stevens and other Americans working in Benghazi.

So let’s suppose that Undersecretary Kennedy has decided to do the dirty. He’s still a career diplomat who actually follows the rules. (In 2008, he barred his staff from attending Obama campaign rallies.) And he’s a long-time government employee who knows that, if the poo hits the fan, he’d be the most likely scapegoat.  The made up designation is exactly the kind of bread crumb that an expert like Todd Keil would notice.  Maybe Kennedy hoped it would give him some credibility should he need to convince the PTBs that he was not a willing participant.