Satanic Priest Adam Daniels bragged publicly that he had obtained a consecrated host for use (i.e., desecration) in the Black Mass planned for next month, so Oklahoma City’s Archbishop Paul Coakley filed a lawsuit to get the host returned.

In the lawsuit, the Archbishop said that not only is the consecrated host the rightful property of the Catholic Church, it is literally priceless, because no value can be placed on the Body, Blood, Soul and Divinity of Our Lord, Jesus Christ.

“The consecrated host, which has been obtained illicitly from a Catholic Church, is to be desecrated the vilest ways imaginable as an offering in sacrifice to Satan.” – Archbishop Coakley

The attorney representing Coakley explained in an article at Catholic Vote that the lawsuit was simple.

“A consecrated host only comes from the Catholic Church. Satanists acquired the host by theft or fraud – both of which are illegal ways of acquiring property. That means that the Satanists have a legal obligation to return the stolen property.”

Earlier today, an attorney representing the Satanic Church presented the host to a Catholic priest in Oklahoma City. With its return, Archbishop Coakley dismissed the lawsuit with prejudice.

The fast Bishop Slattery asked for did not achieve (yet) outright cancellation, but as of yesterday, Daniels’ group had sold only 39 tickets to their blasphemous event. Please join us in praying God’s will be done.

St. Michael the Archangel, defend us in battle. Be our defense against the wickedness and snares of the Devil. May God rebuke him, we humbly pray. And do thou, O Prince of the heavenly hosts, by the power of God, thrust into hell Satan, and all the evil spirits, who prowl about the world seeking the ruin of souls. Amen.

I just read an interesting article comparing the Bundy Ranch protests and the Ferguson riots.

Excerpt: “The difference in conduct and the example of which protest implemented the proper course of action could not be more clear. One did it right. The other couldn’t be more wrong to achieve the intended ends.

“Finally we can also see the bias in the press in this situation. During the Bundy ranch standoff the media was universal in its disdain for the protesters and despite that no actual violence occurred, the media routinely condemned the protester’s rhetorical attack on the government.

“On the other hand, in Ferguson the media is four square behind the criminal actions by the protesters and suddenly have found reason to complain about the “militarized police” and the over reaction of the police and state and local governments.”

Comments Off on Fifty years later and they STILL aren’t listening!

On August 4, I blogged about resistant starch, which I had researched at the urging of a friend who shares my affliction.
https://polination.wordpress.com/2014/08/04/resistant-starch-it-might-be-good-for-what-ails-you/

I was impressed enough to give it a try and today I am here to say, with wide eyes and dropped jaw, that I felt well enough this morning to do part of my old yoga exercises … and I’m talking about for the first time in more than a year!

Since this is the only change I’ve made to my regimen … I try to do only one new thing at a time, so I can assess it … I’m inclined to believe BUT NOT CERTAIN that the resistant starch is doing me some serious good! 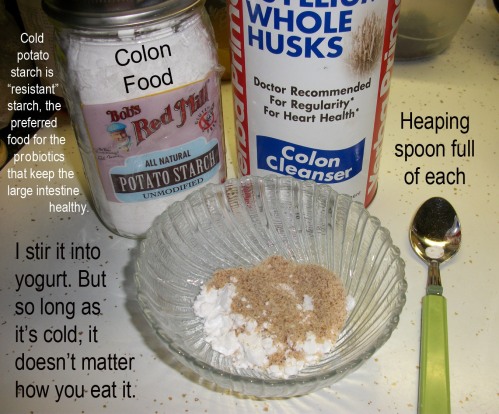 Besides the colon-healthy breakfast pictured above, Dearest and I have also been keeping a bowl full of small, boiled potatoes in the fridge for noshing. It’s amazing how satisfying a little tater can be! And yes, they do need to be not hot, because heat changes the starch back into a non-resistant form that is digested before it gets to the large intestine. That’s what “resistant” means … it resists being digested in the stomach or small intestine.

Plus, BONUS! … resistant starch supposedly has half the calories of non-resistant starch … and a BUNCH less than Dearest’s snack-attack choices (raisins, cashews, chocolate) … so maybe over time we’ll see a little decrease of the middle-aged spread too. 🙂

Note: There are other ways to get resistant starch into your diet. Dearest and I picked cold potatoes because we like them and it was easy. See the blog I linked above for links to articles and videos about resistant starch. Or just google it and see what pops for you.

Diabetics: According to this article, the idea that you shouldn’t eat potatoes is a myth. http://diabetestepsrx.com/should-people-with-diabetes-avoid-potatoes/

Comments Off on Color me impressed

I read a number of articles today by legal people saying there’s no way a grand jury will indict Ofc. Darren Wilson,given the facts at hand and more than a dozen witnesses who saw Saint Charging Bull pummel the officer senseless and after starting to leave the scene,came back to finish the beating. That’s when Wilson used deadly force to stop the 300 lb. Brown.Wilson was taken to the hospital for treatment for severe facial wounds.

Facts, unfortunately, are nothing but an annoyance to the liberal agenda. Holder met yesterday with the aggrieved,soon-to-be-millionaire birth units of the young gangster and reassured the screaming mobs ‘change is coming.’
Holder visits suburban St. Louis, says ‘change is coming’ after police shooting
http://www.foxnews.com/politics/2014/08/20/holder-arrives-in-ferguson-after-subdued-protests/

Jay Nixon (dirtpile-Mo.) has already tried and convicted the officer.
All the policeman has to do is avoid being railroaded by the governor,the US Attorney General and,ultimately,the President.

Outside the St. Louis County Justice Center in Clayton, where the grand jury was expected to convene on the matter, two dozen protesters gathered in a circle for a prayer, chanted, and held signs urging prosecutor Bob McCulloch to step aside. Nearly two dozen officers guarded the building’s main entrance, which also was blocked off with yellow police tape.

Businesses in Clayton prepare for the lawless hordes about to descend on them to steal everything they can lay hands to.

I spoke with another black I work with and he thinks its perfectly OK for his ‘people’ to take what they can get,sees no problem in baby mama and baby daddy making lots of money because they kid was a criminal and says blacks killing whites is simply “payback.”
He wasn’t joking.There is no doubt a deep-seated racial hatred that runs deep in the black culture. That,frankly,frightens the hell out of me.

In the other top story today,African Idol Barry Obama gave a five minute statement on the butchering of James Foley,mumbled some crap about ISIS not representing peace-loving muslims,then 8 minutes…EIGHT FREAKING MINUTES!!!! later he was out of his jacket and dress shirt and back on the golf course for a 5 hour round with his buddies. Those of us on the right are sickened but far from surprised,while the left feigns outrage that their hero feels no empathy for anyone but himself. That’s the description of a total narcissist.

Completely ignoring howls of protest about his shameful behavior,Barry was back on the links TODAY for his 8th round of golf in 11 days.
This article is from the UK Telegraph.I had it cached in IE and it WILL NOT C&P so I have to riff on it myself.Here’s the link:
http://www.dailymail.co.uk/news/article-2730503/Fist-bump-Furious-reactions-Obamas-5-hour-golf-game-overshadow-5-minute-ISIS-speech-teed-IMMEDIATELY-condemning-American-photojournalist-James-Foleys-executioners.html

Donning his best RINO suit,Joke Scarbooble bragged how his hero showed ISIS what a badass he is:

There are,of course,other things in the news contained in the reply section. 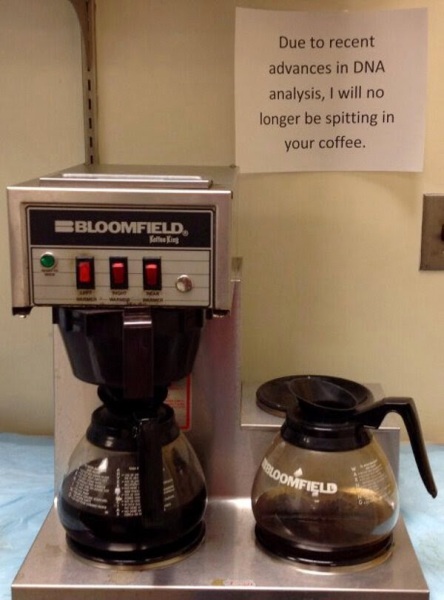 Sources told ABC that the White House knew as early as August 13th that ISIS was planning to assassinate Foley in retribution for American air strikes. The British government has examined the videotape and believes the purported executioner may be a former Gitmo detainee. 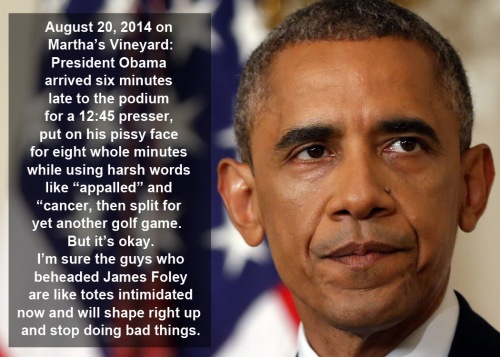