War is not the worst evil 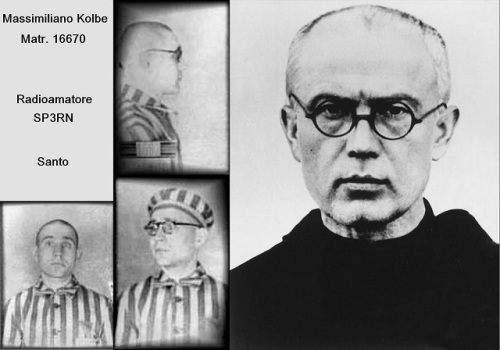 Today is the Feast of St. Maximilian Kolbe, a Polish Conventual Franciscan friar.  During the Second World War, Kolbe sheltered many Polish Jews in his friary. In 1941, he was arrested and later transferred to the Auschwitz death camp as prisoner #16670. In July of that year, he volunteered to take the place of a husband and father who had been selected by the Nazis to die.

During his confinement in an underground bunker, Fr. Kolbe kept up the spirits of his fellow prisoners and remained a pillar of strength and calm. After all the other prisoners had died of starvation, the Nazis executed Fr. Kolbe on August 14, 1941. The following day, which is the Solemnity of Mary’s Assumption into Heaven, his mortal remains were cremated in the infamous Auschwitz ovens.

The Holocaust was a rare moment of moral clarity in all of human history. The Global War On Terror should be another. When innocent women and children are being starved on a mountaintop or hacked to pieces, when jihadists cheer as their children play with severed heads as trophies, when we see the black flag of death raised above the rubble and the cross of our eternal salvation torn down, we must act.

Muslim extremists seek permanent war against all those who do not believe as they do. Unless and until they are defeated, those who desire freedom and peace will never be safe.

Source for most of the text above:
http://www.catholicvote.org/moral-clarity-in-the-middle-east/

9 responses to “War is not the worst evil”