One of Hamas’ main command bunkers is located beneath Shifa HOSPITAL in Gaza City.

Yes, a hospital. And it’s no SECRET that it’s there!

During the three weeks of Israel’s Operation Protective Edge, Hamas has been caught using not just hospitals, but also mosques and schools to hide militants and weapons, all of which are contrary to international rules of war created to protect civilians. When their actions result in casualties to their own people, they publish bloody photos and blame the Israelis.

So why are reporters presenting Israel as the aggressor and Hamas as the victim? Because, unlike Hamas, Israel has never kidnapped or murdered any journalists who made them look bad. Currently, Hamas is refusing to allow any journalists to leave Gaza and at least one who failed to submit Hamas propaganda to his editors has been subjected to Hamas interrogation.

Instead of believing pro-Hamas news reports, listen to what Hamas actually says and does. 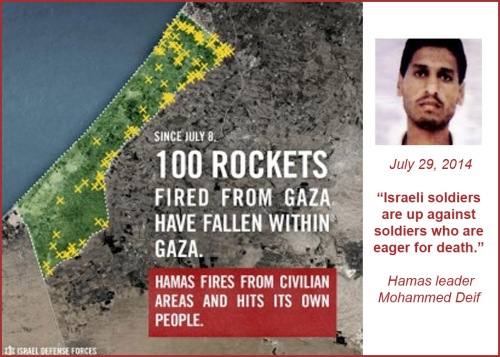 Hamas Sermon from the Gaza Strip: “We will totally exterminate you. We will not leave a single one of you alive.” – July 2014