Comments Off on Border Patrol Briefing

“Separation of church and state” is not in the Constitution

Stephen King’s ignorant tweet is an example of the level of discourse we’re getting on the Hobby Lobby thing.

Those who use the term “separation of church and state” to justify governmental infringement on the religious rights of Americans are very far removed from the intention of the Founders when they adopted the First Amendment to the U.S. Constitution on December 15, 1791.

The term “separation of church and state” does not appear in the Constitution. It is an offshoot of the phrase, “wall of separation between church and state”, as written in Thomas Jefferson’s letter to the Danbury Baptist Association in 1802, eleven years after the First Amendment was adopted.

The Danbury Baptist Association was afraid of becoming subservient to other Christian denominations. Jefferson’s response was meant to calm their fears by referencing the First Amendment:

“Believing with you that religion is a matter which lies solely between Man & his God, that he owes account to none other for his faith or his worship, that the legitimate powers of government reach actions only, & not opinions, I contemplate with sovereign reverence that act of the whole American people which declared that their legislature should ‘make no law respecting an establishment of religion, or prohibiting the free exercise thereof,’ thus building a wall of separation between Church and State.”

The whole POINT of the wall was to keep government out of religion, not to keep religion out of government.

Buzz and Bunny graduated to BIG beds this week-end!

Comments Off on Mascot Update!

The Immaculate Conception and the Assumption of Mary

Immaculate Conception of Mary: This Roman Catholic Church teaching is often confused with Mary’s virginal conception of Jesus by the power of the Holy Spirit, but it is actually about the conception of Mary herself, that she was granted the unique privilege of being conceived free of original sin through the anticipated merits of Jesus Christ.

Assumption of Mary into Heaven: The Roman Catholic Church teaches that the Virgin Mary was assumed body and soul into heavenly glory. Whether Mary physically died before she was assumed has never been dogmatically defined. At Medjugorje, she told one of the seers she did not die. Jesus died and rose again into a glorified body, giving us the model for what will happen to the dead in Christ when they rise forever. I believe Mary went straight from a living earthly body to a glorified eternal body as the model for what will happen to those who are alive in Christ on the day of the Rapture.

Yesterday, I saw this interesting meditation.

When studying Anatomy and Physiology in college, the lesson that briefly discussed fetomaternal microchimerism, became instructive to me on a different level. Learning that every child leaves within his mother a microscopic bit of himself — and that it remains within her forever — the dogma of the Immaculate Conception instantly became both crystal clear and brilliant to me.

Mary, then, was indeed a tabernacle within which the Divinity did reside — not for a limited time, but for all of her life. Understanding this (and considering how the churches seemed to get it ‘way before microscopes told us anything) the Immaculate Conception made and makes perfect sense: God, who is All-Good is also completely Pure; the vessel in which He resides, then, must be pure, too, or it would not be able to sustain all of that “light in which we see light itself.”

Microchimerism also relates to the dogma of the Assumption of Mary, as well. In the psalms we read “you will not suffer your beloved to undergo corruption.” Christ’s divine body did not undergo corruption. It follows that his mother’s body, which contained a cellular component of the Divinity — and a particle of God is God, entire — would not be allowed to become corrupt, either.

Wikipedia’s article on fetomaternal microchimerism suggests the author may have overstated the frequency and persistence of the phenomenon. “Fetal cells have been documented to persist and multiply in the mother for several decades. … About 50-75% of women carry fetal immune cell lines.”

This doesn’t really change the point of the meditation, especially if one considers that Jesus’ fetal cells were divine. Plus … bonus … the Wikipedia article says that maternal immune cells may also cross into the child’s body and persist, which is very cool to think about as well.

Comments Off on The Immaculate Conception and the Assumption of Mary

The greatness of small things done for God 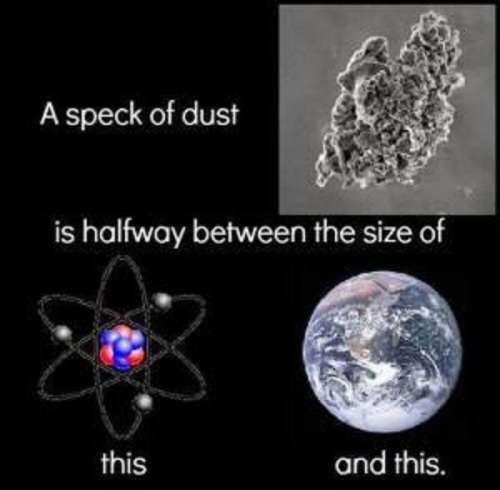 The following is an Our Daily Bread meditation by David Roper.

For who has despised the day of small things? —Zechariah 4:10

Often I meet with people who serve in what they think are seemingly small ways in small places. They are frequently discouraged by loneliness, feeling that their acts of service are insignificant. When I hear them speak, I think of one of the angels in C. S. Lewis’ book Out of the Silent Planet. He said:

“My people have a law never to speak of sizes or numbers to you. . . . It makes you do reverence to nothings and pass by what is really great.”

Sometimes culture says bigger is better—that size is the truest measure of success. It takes a strong person to resist that trend, especially if he or she is laboring in a small place. But we must not “pass by what is really great.”

It’s not that numbers aren’t important (after all, the apostles counted their converts; see Acts 2:41). Numbers represent living people with eternal needs. We should all work and pray for large numbers of people to enter the kingdom, but numbers mustn’t be the basis for self-esteem.

God doesn’t call us to find fulfillment in the amount of work we do for Him, or the number of people who are a part of that work, but in faithfully doing our work for His sake. Serving our great God with His strength in a small way is not a stepping-stone to greatness—it is greatness.

Lord, help me remember that there are no small places or small people. All are precious in Your sight. May I see the value of my work and cherish it as You do.

Comments Off on The greatness of small things done for God