Does the government have the right to cancel a trademark?

As far as I can tell, the answer to that is no! NOTE: I’m not a lawyer, so what do I know? However, I did some research after a reader asked the question and, so far as I can tell, the government doesn’t have any right to dictate what name or logo a company uses. It can only refuse to offer trademark protection from the start.

In 1992, a group of Native Americans sued the Trademark Office for ever issuing the Redskins team trademark protection at all. Their case rested on historical evidence that the name was an ethnic slur at the time of the application. In 1999, the Trademark Trial and Appeals Board found in their favor, rescinding the team’s trademark protection based on evidence from dictionaries and other reference works, newspaper clippings, movie clips, scholarly articles, expert linguist testimony, and evidence of the historic opposition by Native American groups. The team appealed and won in federal court on a technicality that the Native Americans say they’ve fixed. The Trademark Board has just renewed their original decision and the team says it will appeal again.

I found an article at Harvard Law explaining trademark law @ https://cyber.law.harvard.edu/metaschool/fisher/domain/tm.htm. The purpose of trademarks appears to be to protect the rights of businesses to own and control their names and logos. The Redskins can use their name and logo with or without trademark protection, but without it, the courts will not protect them from other people selling Redskins knock-offs.

I think you’ve got a conundrum right there. If a name and/or logo actually is offensive, then why would anyone WANT to use it for their business or their knock-offs? Unless maybe a whole lot of folks don’t agree or else don’t care. The problem for those who are denied trademark protection is that anything they spend on advertising or research and development can be hijacked by copy cats. The Redskins make big bucks off their souvenir products; they don’t want anyone else legally cutting into their profits.

The Harvard law article doesn’t discuss grounds for denial of a trademark application, but Section 6, “Can trademark rights be lost?”, lists only three causes for a business losing a trademark that has been accepted.

In the case of a trademark acquiring a “disparaging” meaning as a result of changes in the culture, I believe it would be up to the owner to decide to abandon the trademark, not up to the government to snatch it away.

Keep in mind that I only read a couple articles on-line. I could have all or part of this wrong. What I don’t think I have wrong is that the Senate Majority Leader should not be spending time on an issue that is working its way through the courts … unless maybe he’d already finished all the work he’s actually getting paid to do, like passing a federal budget or bringing House-passed legislation to the Senate floor for discussion and vote.

The U.S. Patent Office has deemed the name “Redskins” to be a disparaging term, and as a result they have canceled the trademark. Harry Reid believes he’s one step closer to getting the name changed. Notice the key word “forced” in his tweet. Hello, 1984. 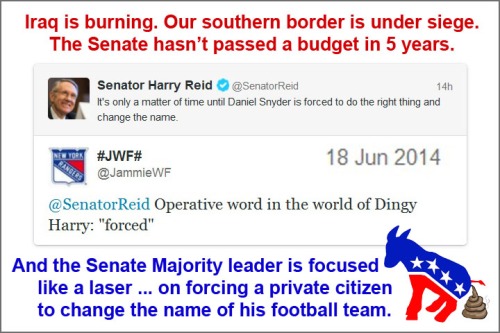