Proof once again that great minds think alike: I had planned to post about the nitwit on CNN who decided that Cruella Michella can sign legislation,but CtH beat me to it. She did a far better job than I could have done anyway. Fear not,I’m not done with the Ghetto Trash with Cash by a damn sight. What really rankles me is Bozo is doing photo ops with science fair kids,troops in Afghanistan (exactly what DID the troop buildup in 2009 accomplish,anyway?) and today he’s polluting West Point to blow more hot air to young men and women he’s so underqualified to be addressing.

It’s taking longer to post recently because SD was over and set her mama up with a Facebook account. She’s come across people she had completely forgotten about. Now she has a use for the computer besides playing solitaire. She’s supposed to stop by when she’s in town again some time and set my account up. I’ve gotten along without it so far so it doesn’t bother me much. I guess I’ll have to be dragged kicking and screaming into the 21st century.

DW found this on FB

The Tea Party ousted a sitting Lt. Governor in Texas yesterday,along with a 91 year old who has served 17 terms. He was a democrat until 2002 when he switched parties and had the support of the republican establishment.

HOW DARE THESE LITTLE BRATS COMPLAIN ABOUT THE VEGETABLES AND 500 CALORIE MEALS I’M FORCING THEM TO MAKE? DON’T THEY KNOW WHO I AM? NOW SHUT UP AND DO AS I COMMAND!

BTW,WHAT YOU ARE LOOKING AT IS ICE CHUNKS IN THE WATER

All y’all smart-ass science kids are wasting yo time. By the time I get done the only job y’all will be able to get is flippin’ burgers at Mickey D’s or at WalMart. Don’t forget to pay your fair share of taxes.

From TPNN:  It’s incredible that we live in a time when the President has dismissed the Supreme Court’s importance as “an unelected group” of people, but has offered his wife a chance to combat Congress on a measure in the House from the bully pulpit of the White House.

May 21, 2014: The House of Representatives overwhelmingly passed (390 to 33) the Veterans Affairs Management Accountability Act. If the Senate passes and the President signs this bill into law, it would be much easier (read: possible) for the scandal-plagued VA to fire employees based on poor performance (read: clean out dead wood). YAYS were bipartisan; NAYS came from Democrats ONLY.

May 22, 2014: The day before Memorial Day weekend started, Senator Marco Rubio (R-FL) asked for the Senate to bring this bill to a vote.  Senator Bernie Sanders (D-VT) objected on behalf of Senate Democrats. As chair of the Senate Committee on Veterans Affairs, Sanders has the power to delay ANY action on this important bill INDEFINITELY. He says in the video below he is going to hold a HEARING …. in June.

Q. Guess who hates the idea of dead wood getting fired?
A. The UNION that protects said dead wood from accountability.

Q. Guess what Socialist Senator is owned by the UNIONS?
A. Bernie Sanders.

Remember back in 2009 when Democrats kept screaming about how Republicans opposed Obamacare because we supposedly WANTED people to DIE?

May 15, 2014: Senator Sanders justified his “sit on all VA reform legislation until hell freezes over” policy by telling CNN “We know that people die every day.”

Sanders also claimed, “There are problems, and we have got to get at those problems. But we need the facts to lead us to where we want to go.” But Congress AND the TWO presidents have KNOWN SINCE 2005 that the VA was failing veterans by delaying care, wasting money and falsifying their records!

Sanders NEVER served in the military, so why is he CHAIR of the Senate’s Committee on Veterans Affairs? Because he votes the way Harry Reid tells him to vote. Officially, he is an Independent (not a Democrat), but he describes himself as a “Democratic Socialist” which means he’s not the centrist his Independent status might suggest, but rather a Progressive Obamacrat.

This is what the poor get under Capitalism vs what they get under Socialism. 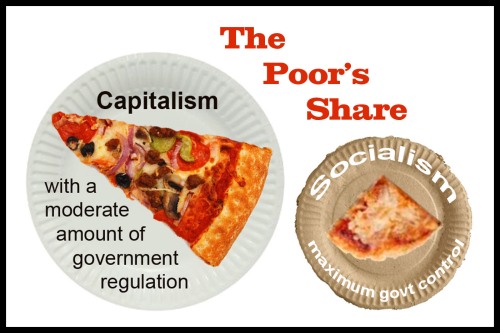 Comments Off on Redistribution = Socialism

Club for Growth produced these funny ads on behalf of candidates in Alaska and Arkansas.

At the beginning of the 20th century, federal taxes accounted for 3% of the nation’s gross domestic product (GDP); today, they approach 100% of GDP. Today’s high federal tax rates push up the cost of all consumer goods and services, leaving ordinary people with less money to buy food, clothing, and other needed items.

Club for Growth works to promote a high growth economy by supporting pro-growth political campaigns coupled with legislative involvement, issue advocacy, research, training and educational activity. Club for Growth believes the goal of tax policy should be to raise the amount of money needed to fund legitimate functions of government while doing the least amount of damage to the economy and respecting the principle of treating taxpayers equally. Read more @ http://www.clubforgrowth.org/

Comments Off on Bwahahaha ::rawkrawk::