I’m sorry but … what does this even mean?

I am not making this up. Democrats cooked up this bumper sticker idea and posted it on Twitter to get votes. What does “LIKE A BOSS” even mean? Plus, I thought we were supposed to #BanBossy … or something. 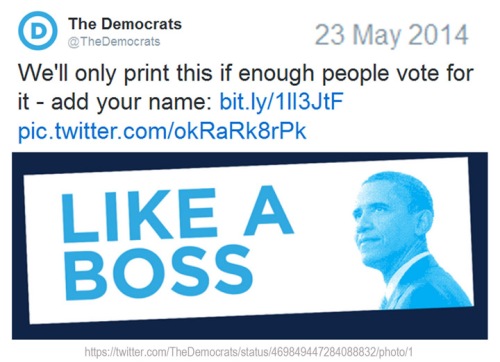 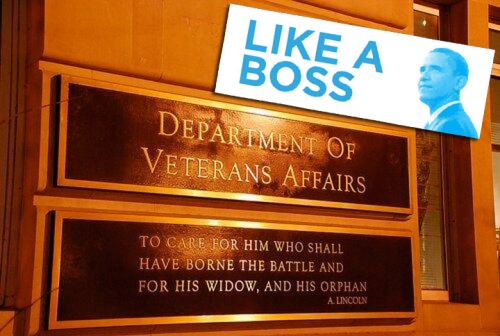 Photoshoppers got in on the fun as well: 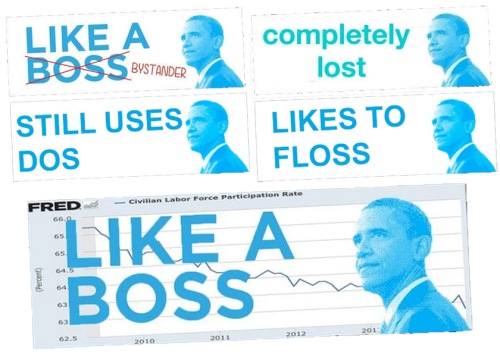 This makes me sad

The judge was appointed by President Obama last year. What a shock. Not. Clearly, rules are for the peasants and by “peasants” I mean “Conservatives.”

Some of the (non-scatalogical) tweets responses: 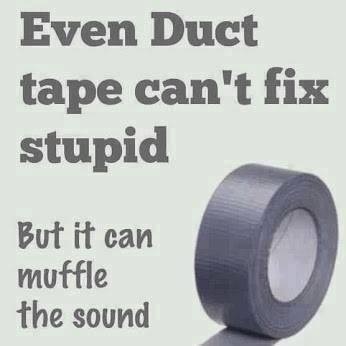 A year after the FBI supposedly launched a “vigorous” investigation of IRS targeting of conservative groups and individuals, the FBI has not indicted A SINGLE INDIVIDUAL. Not one. And victims have told Cruz they have NOT BEEN INTERVIEWED by the FBI. That’s “vigorous”? VIGOROUSLY COVERING DEMOCRAT ASSES?

And got SLAMMED for it.  Was he cowed?  Not one whit.  You have to take time to watch this video!

ESPN’s Stephen A. Smith: My Position on Mark Cuban’s Comments is Unchanged [6:59]

The HEADLINES about the VA scandal have been making my hair stand up and smoke. I couldn’t bear to read the stories until Dearest talked to our Rep. Tom Reed and learned VA services in our area appear to be good. Phew. I’ve got a kid who uses them for a war injury. My heart goes out to those who are NOT getting care, but relieved my inner Mama Grizzly can calm down and take a BREATH about one piece of good news. Plus, my hair.

Leading liberals have long touted the VA as an efficient model of government-run health care.

The Republican-dominated House of Representatives has passed a DOZEN VA reform bills; they’re all gathering dust in the Democrat-dominated Senate.

Good! I hope it squashes the corruptocrats FLAT.

Apologies for my lack of attention to this regular feature. This subject upsets me so much, I was literally SHAKING by the end of my blogging day on Saturday. Keeping track of where I read what just didn’t happen.