616 and the Centennial of the Fatima Angel Apparitions 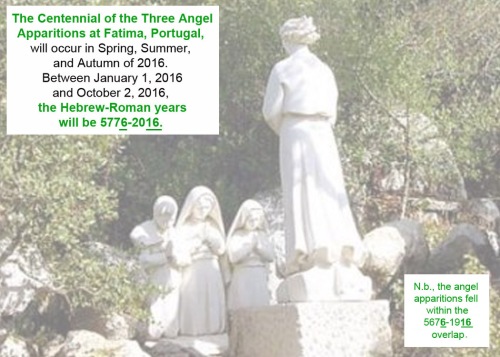 Click on graphic to embiggen for easier reading of teensy text. Please note: My intention in pointing this out is not to say the apparitions at Fatima were Satanic in origin.  Far from it.  I believe Mary is an integral part of salvation history and that the 20th century apparitions are part of God’s strengthening of His people during the century God granted Satan extra power to try to destroy the church.  See https://polination.wordpress.com/2014/03/21/a-century-of-trial/.

**Tish’a B’Av is a Jewish fast day commemorating the destruction of the First and Second Temples in Jerusalem and the subsequent exile of the Jews from the Land of Israel.