Mary and the Number Five

Christians in the Middle East call the Hamsa (which means Hand and Five) the “Hand of Mary.” 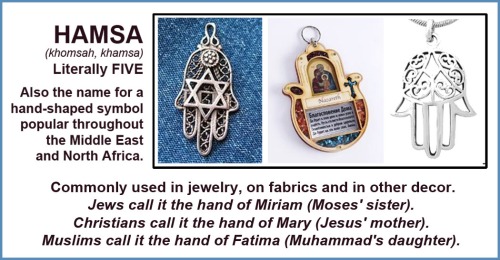 There is a good reason for associating Mary with a Hand. Her response to God’s request that she bear His Son was, “Behold, I am the handmaid of the Lord. May it be done to me according to your word.” (Luke 1:38)

In the Bible, the number FIVE is associated with:

Tabernacle: The construction of the house of the Ark of God in the wilderness was based on fives. There were five pillars at the end of the Holy Place. The pillars were five cubits apart and five cubits high. Etc. See Exodus 27.

Just recompense: Thieves must repay five times the value of the oxen they steal (Exodus 22:1).

Reward: Benjamin was honored by Joseph with five times more food than his brothers (Genesis 43:34) and five sets of clothes (Genesis 45:22).

Mary fits each of these.

Mary carried the Son of God in her womb and in her heart. She truly is a Tabernacle, the Ark of the New Covenant.*

Mary is Full of Grace. “When Elizabeth heard Mary’s greeting, the infant leaped in her womb, and Elizabeth, filled with the holy Spirit, cried out in a loud voice and said, ‘Most blessed are you among women, and blessed is the fruit of your womb.'” (Luke 1:41-42)

We were prepared for Mary (Isaiah 7:14*) and the Angel Gabriel prepared Mary to conceive (Luke 1).

Just recompense: Where Adam and Christ reveal a parallel in salvation history, so too do Eve and Mary. Before tossing Adam and Eve out of the Garden, God said “to the woman … I will intensify your toil in childbearing” (Genesis 1:16). God also said to the snake, “I will put enmity between you and the woman, and between your offspring and hers” (Genesis 1:15). Mary was never just a uterine conduit to get Jesus into a human body or a Nanny to change his nappies and wipe his nose. She was, is and has always been an integral part of salvation history.

Reward: When the Angel Gabriel came to Mary, the first thing he said was, ““Hail, favored one! The Lord is with you” (Luke 1:28).

In the Protestant list of the Ten Commandments, the 5th is “Honor thy father and thy mother.”  When we accept Jesus as our Lord and Savior, we become children of God, brothers and sisters to Christ.  That makes God our heavenly Father and Mary our heavenly mother.  So again … Mary and the number Five. 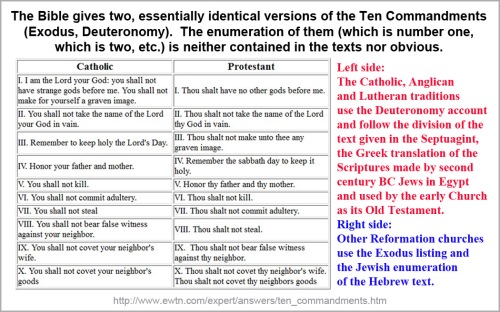 This is the first time I’ve ever seen these two lists side-by-side.*  The two FIVEs put murder and parenting side-by-side.  I find that kind of goosebumpily significant, in regard both to Mary and Jesus and also to the grave sin of abortion.

*Read more about why Mary is the Ark of the New Covenant @ http://www.catholic.com/magazine/articles/mary-the-ark-of-the-new-covenant.
*Read more about the Isaiah 7:14 prophecy @ http://jewsforjesus.blogspot.com/2007/11/virgin-birth-messianic-prophecy-or.html.  Key point: The ancient rabbis who translated the Septuagint (a translation of the Hebrew Scriptures into Greek) rendered the Hebrew word “almah” as “parthenos”, a Greek word which unequivocally means “virgin” — NOT as “young woman.”

Hoping for decent weather tomorrow…they’re calling for temps in the upper 40’s/lower 59’s. We’re planning to go to the big complex where kids play on multiple baseball diamonds. My grandson is playing there at 9:30 and his sister is playing on a different field at 11:30. Really looking forward to it.

I’d like to thank you for the kind words yesterday. It was appreciated more than you know.

I want to apologize in advance to Grunt…I don’t go looking for bizarre pictures of Killary,they just show up,and like a train wreck you just can’t avert your eyes.

A couple things before we get to the silliness.

Baba Wawa filmed her last episode of The Leftist View yesterday before she formally retires to spend her days counting her money and pretending she’s still relevant. A gaggle of A-listers showed up to do the fake hug and kissy thing including the Butcher of Benghazi and the most powerful man in the country,Orca Windpasser.

Speaking of Orca,she’s being sued by a man in Telluride,Colorado whose property is next to the 66 acres she bought for $10.5 million and plans to close access to ski trails that have been used by thousands for many years. I imagine Barry has his BLM army at the ready if she needs them.

Once again we find this regime is conspiring to cover up yet another atrocity concerning veterans on a secret list that are dying before they get treatment. Jake Tapper tried to get a straight answer out of a Spite House spokespuke yesterday and got the same self-serving gibberish we’ve come to expect from this bag of bastards.

It’s looking more and more like the dems will be able to whine about global warming and racism while the republicans push to exterminate themselves by passing amnesty to please their big corporate donors who only want cheap labor. We have a golden opportunity this November but I can promise if they push this immigration crap through many millions like me will stay home. Then we start working on our own party.

OK,now that I’ve depressed everybody,let’s get to the good stuff.

If our foreign policy in WWII was fought with hashtags:

Washerwoman had to pry another reporter off Obama’s ass.

Comments Off on Self-awareness anyone? Bwahahahaha!