And you thought Watergate was a scandal 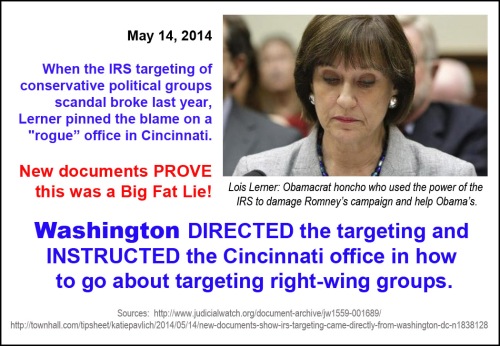 When did this all start?

Who is Lois Lerner?

Something beautiful for you to relax and enjoy!

Comments Off on Waltzing on Wednesday

Below are the headlines and first paragraphs from two news sources about the same story. One is by LifeNews, an unabashedly anti-abortion news aggregator serving the pro-life community. The other is by Associated Press, an allegedly unbiased world news aggregator allegedly serving American voters. I’m passing this on for two reasons. One, it’s good news for the unborn. Two, it highlights in a stark and blatant way just how left-biased Associated Press really is.

Several states in the last couple of years have taken steps to yank taxpayer funding from the Planned Parenthood abortion business. In each case, the abortion giant has taken the state to court in an attempt to force taxpayers to finance its grisly trade.

Planned Parenthood has admitted defeat in its lawsuit against Kansas after its state legislature dropped funding. Planned Parenthood of Kansas and Mid-Missouri dropped its legal challenge Friday. The organization filed a brief stipulation of dismissal Friday in U.S. District Court in Kansas.

Planned Parenthood of Kansas and Mid-Missouri dropped its legal challenge Friday to a Kansas law that stripped two of its Kansas clinics of federal money for family planning, leaving uncertain the impact to its low-income patients in Wichita and Hays who depend upon them for reproductive health care services.

The organization filed a brief stipulation of dismissal Friday in U.S. District Court in Kansas.

Later in the stories, both news aggregators explained that the Kansas law was about Title X federal family planning funding.

LifeNews said PP became ineligible “when the state enacted an annually-renewed proviso that such money go to full-service public health clinics and hospitals.”

The AP version was cleverly written to give the distinct impression that Kansas law-makers just wanted to stop low income people getting any help from Title X moneys.

The Kansas law actually INCREASED the availability of services by shunting the money ONLY to full-service facilities. Note: Planned Parenthood does not do mammograms.

Here’s how AP covered up the reality of the effect of the Kansas law and pandered to poor widdle PP, the organization that SUED Kansas for trying to ensure low income women HAD access to mammograms.

“We take seriously our duty to defend Kansas law against legal challenges,” Attorney General Derek Schmidt said in a written statement. “This law was successfully defended.”

His statement did not address what provisions, if any, the state was making to provide low-cost reproductive services that had been funded through federal planning dollars at the clinics. His office referred that question to the Kansas Department of Health and Environment, which did not immediately respond to phone messages.

Did you catch this? The AG’s statement about Kansas winning the court case did not include information about the contents of the law that was under challenge.

I mean … what could they POSSIBLY have to do that would be more important than waiting breathlessly by the phone 24-7 hoping for a chance to explain public information to AP reporters who are too lazy to GOOGLE?!

Comments Off on Main Stream Media Bias Is Real

CONSIDER THIS AN OPEN THREAD.

May 13, 2014: Stacyontheright has a strong statement for the organizers of a conference where teachers and high schoolers learn how to hate white Christian men and America. This is excellent!