WEEKS after a Nigerian activist launched the #BringBackOurGirls campaign that helped get journalists interested in the terrorist kidnapping of 276 Nigerian schoolgirls, FLOTUS used her massive personal influence to further the cause of rescuing the girls before their savage kidnappers sell them into slavery. 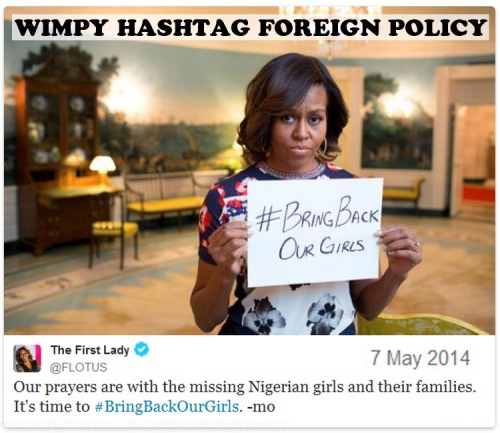 Hillary Clinton … whose husband refused to go after Osama bin Laden … weighed in with her own self-aggrandizing and nonsensical tweet that suggested somewhere in the world there exists a conscionable reason to target innocent girls. 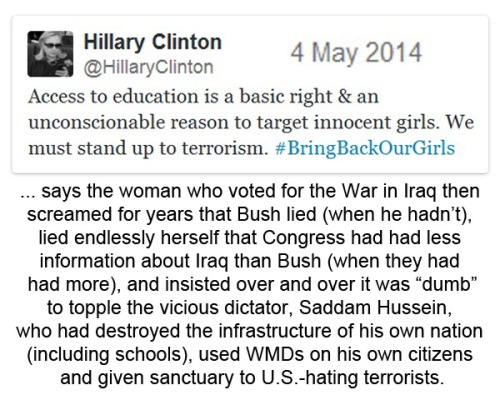 Please note Clinton’s tweet was THREE DAYS before Mooch got around to hers. But then, Mooch included a selfie and a hand-written sign, so undoubtedly took  lots more time and thought. Or something.

“Just as the last floppo hashtag, #WeStandWithUkraine, didn’t actually involve standing with Ukraine, so #BringBackOurGirls doesn’t require bringing back our girls. There are only a half-dozen special forces around the planet capable of doing that without getting most or all of the hostages killed: the British, the French, the Americans, Israelis, Germans, Aussies, maybe a couple of others. So, unless something of that nature is being lined up, those schoolgirls are headed into slavery, and the wretched pleading passivity of Mrs Obama’s hashtag is just a form of moral preening.”

“The other day, members of Boko Haram, a group of (surprise!) Muslim ‘extremists’, broke into an agricultural college in Nigeria and killed some four dozen students. The dead were themselves mainly Muslim, but had made the fatal mistake of attending a non-Islamic school. ‘Boko Haram’ means more or less ‘Learning is sinful.'” 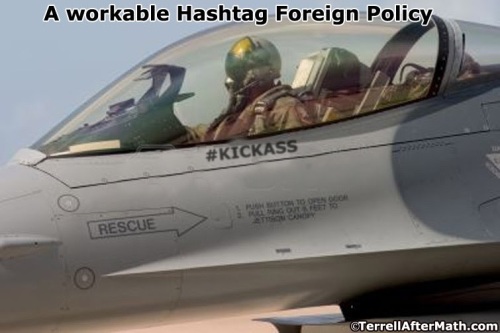 Yeah. Cuz you know what terrorists respond to? Smoking holes where their buddies used to be. Not hashtags.

Comments Off on Hashtag diplomacy