Some actors are intelligent, thoughtful and well-read enough to go off-script without making us all dumber for having listened to them. Gwyneth Paltrow is not one of them. Dean Norris on the other hand … bwahahahaha. 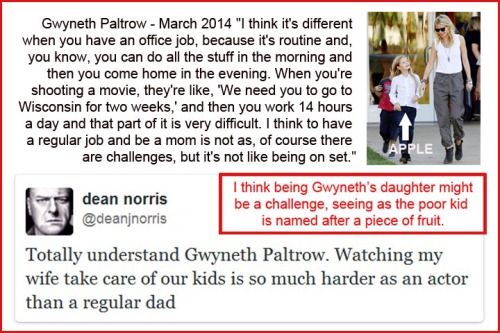 I saw this recent photo and thought (as I have often done in the past), “Dang! She’s smiling, but she’s got such angry eyes!”

I thought it would be interesting to see if I was imagining this or not.  So here’s the challenge: What expression do you think Michelle Obama has in the full picture of each of these eye photos? 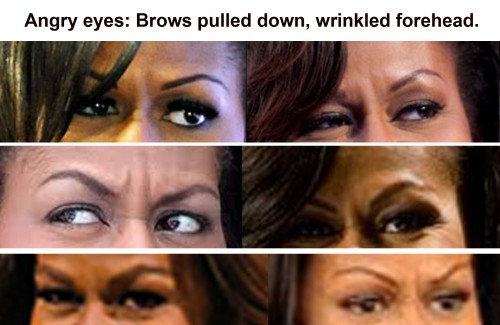 A long time ago, I heard her say, “It’s easy to know what the Left is up to. Just listen to what they accuse us of.” Steyer Infection https://www.youtube.com/watch?v=ScCejJBRO24

The irony of the fact that the day following the Obamacare deadline the regime announces over 6 million signups and it being April Fool’s day is not lost on me.Media types across the nation are drinking heavily,dancing clumsily and having multiple orgasms over thos pile of horse manure.The democrats have learned they can get away with telling the most outrageous lies they can think of and the presstitutes will dutifully parrot their lies to masses who couldn’t care less about anything but the next welfare check.NBC hack F.Chuck Todd giddily announces that once the signups hit 6 million it became “unrepealable.”Nobody bothers to mention that if it was that good they wouldn’t delay its implementation of parts of it until after the 2014 elections and the real pain until 2017 when Barky will be kicking it with Reggie in Hawaii.

You may have thought that being April Fool’s I would post some really stupid crap.I’ve decided to make my posts from now on all-business,serious topics and sober commentary.No more funny stuff………..

found a couple pictures I put my own captions on….tell me what you think.

‘UMMM…MR. PRESIDENT,I’VE HEARD BLACK MEN HAVE REALLY LARGE PENISES,EVEN THOUGH YOUR WIFE COMPLAINS YOU’RE HUNG LIKE A HAMSTER.CAN YOU ..UH,…TAKE IT OUT SO I CAN SEE FOR MYSELF?I HAVE RUBBER GLOVES ON.’

Dirtbag:’OK,Harry,I farted.But at least I don’t have to hide the fact my adult diaper is leaking.’

THIS STATUE OF A CAMEL WAS BUILT WITH $400,000 0F TAXPAYER MONEY.YOU CAN SEE IT…IF YOU’RE EVER IN PAKISTAN

This is MSDNC Wunderkind Ronan Farrow.He got an award three days after his show started last month.He is going to be cancelled because his ratings are lower than reruns of  The Golden Girls on the Hallmark channel.An official at the networks was quoted as saying “he kind of stinks on television.”

Ronan is the son of Mia Farrow and either Woody Allen or Frank Sinatra.(she’s not sure which).I’m a little disappointed that Sinatra would bump ugly with the charming Ms. Farrow.For the love of Pete,he was boning Ava Gardner when she was the hottest thing on two legs in the ‘late ’40s.She still looks better than that tub of dirty dish water and she’s been dead since January of 1990!

he DOES kind of look like ‘Ol Blue Eyes,doesn’t he?