Bubble bath your window has a churning wombat skillet

and other things that make total sense only inside the Obamacrat Reality Bubble.

Tweet replies to Donna “Churning Wombat” Brazile’s whining about all us meanie pants who don’t like President Boyfriend’s law breaking:

Our founding fathers would have never tolerated any of this crap 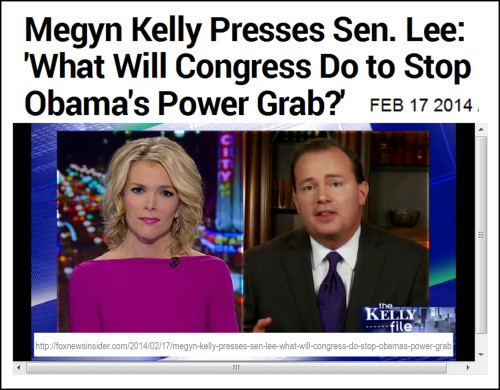 Senator Lee: The Constitution is being openly flouted and that’s hurting the American people.

Megyn Kelly: What are you guys going to do about it?

Senator Lee: The best thing we can do in Congress is to withhold funds, for Congress to exercise its power of the purse.

Megyn Kelly: What are the odds of that happening?

Senator Lee: The more Americans endure the negative effects of President Obama’s policies, the more pressure Congress will feel to start changing the way money is spent by the government.

Oh. … I feel like I bit into what I thought was a bacon double cheeseburger … and got a mouth full of empty day old bread.

As Dennis Miller said, “Our founding fathers would have never tolerated any of this crap. For God’s sake, they were blowing peoples’ heads off because they put a tax on their breakfast beverage. And it wasn’t even coffee.”

So PROUD of their stance, they’ll BULLY you for advertising it

During the last two weeks, the LifeNews website has brought international attention to the link between the Girl Scouts and its support for Pro-Abortion groups and individuals and to the national boycott of Girl Scouts cookies sponsored by Pro-Life groups.

The other day, Brian Crawford, an executive with Girl Scouts USA, wrote a nasty letter to LifeNews demanding they stop lying and stating a date by which LifeNews must guarantee the Girl Scouts it “will comply with our demand.”

(Brian? GSUSA has guys at the helm? I thought this group was all about promoting FEMALE leadership. Whatev. Read more about what Brian does for GSUSA below.)

Typical liberal, right? So proud of their Progressive position that when someone points it out to the sheeple, their natural response is to kill the messenger.

BUT the links between the Girl Scouts and abortion advocacy are many and long-standing.

Cookie sales are a MAJOR source of income for GSUSA, which makes millions of dollars each year through licensing fees paid by the company that bakes Girl Scout cookies. The baker, of course, builds that cost into the wholesale price of the cookies the girls buy to sell door-to-door.

Cookies sales are likely the ONLY source of income for the troops of the girls who go door-to-door selling. They get to keep about 15%. Maybe it would be more to the point to offer to help fund a local troop activity directly. It would certainly involve fewer calories.

Brian Crawford’s JOB at GSUSA is to watchdog “Trademarks and Licensing” for the Girl Scouts of America. Besides writing very firm letters to web sites that expose the Girl Scouts’ connection to the Progressive’s Sluts and Abortion agenda, he also scours eBay and other sites for any sniff of anybody selling or reselling anything Girl Scout without his permission. I’m thinking this means, “Without giving GSUSA their cut.” Among other things, he’s earned his keep for GSUSA by preventing the willy nilly selling of cookies on YouTube by actual Girl Scouts, as well as forced eBay to ban all selling of unopened cookies and/or ANY type of genuine GS memorabilia. Nice, Brian. Real nice.