Wasn’t much of a Super Bowl,was it?

Barky was on before the game with O’Reilly. I suppose Bill tried to be as combative as he dared,while Obozo,the consummate fraud,looked him in the eye and calmly and coolly lied time after time without ever blinking. I’ll probably post the whole ten minutes if anybody has the stomach to watch it.

Some guy named Phil Hoffman died in his toilet yesterday. Some kind of an actor,I’m told. Given the glassine packets that were found and the needle sticking in his arm the theory is he died from a heroin overdose. Pardon me,but I could care less. All the Hollywood types canonizing him as such a great actor. Another one of those who make millions saying words somebody else has written then immerse themselves in drugs,alcohol and debauchery. I’ll save my tears for the innocent who never get a chance to develop talents or know happiness. But that’s just me.

TAKE A GOOD LOOK;CAN YOU SEE THE CONTEMPT,THE PURSED LIPS,THE ICY STARE AS THE GHETTO TRASH IS FORCED TO BE NEAR A WOMAN WHO WAS A REAL LADY AS A PRESIDENT’S WIFE. 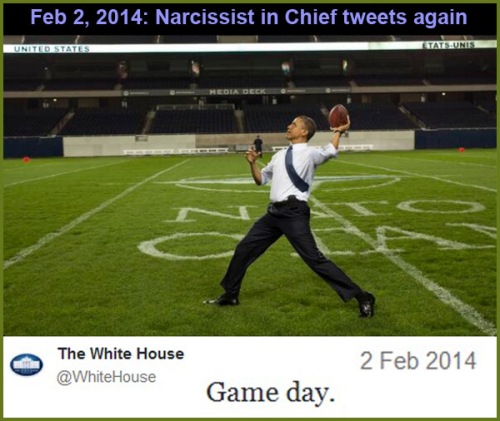 He wouldn’t let “his son” play football, but for Super Bowl Sunday, of course, he’ll toss the old pigskin around.