Remember when we had morals and standards and stuff? Good times.

I talk a lot about the impending End Times because, well shucks. I believe in it. And I want as many of all y’all to be ready to say YES to the Rapture as possible. If Noah had been given the option to take more folks on board, dontcha think he and his family would’ve been doing the same thing?

Anyway, one time when I was yammering on about some aspect or other of this, my friend scoffed and said, “That’ll never happen. This is the United States!” (Yeah, they said that in Germany too.)

I suggested she cast her mind back to the 1950s and consider who would’ve believed that, fifty years later, citizens of the United States of America would have LEGALLY murdered more than 50 MILLION unborn babies. (She got my point.)

So here again, I ask you to cast your mind back a ways and ask yourself who would’ve believed that before the end of the 20th century, there would be something as absurd as an international “No Pants Day”? 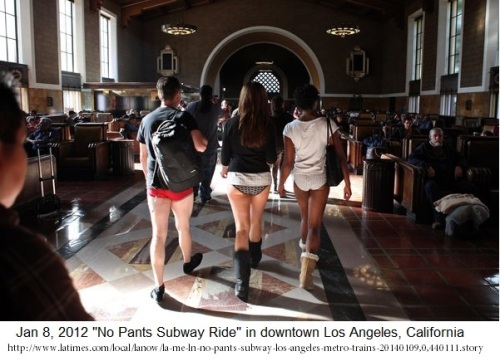 According to the article linked below, it was started by an improvisational theater group in New York in 1999 and has since spread to more than 60 cities across the world.

Isn’t that just So Special knowing that, one day a year, you and your minor children will be exposed to the “fun” of sharing the public streets and subways with nearly butt nekkid adults?

What’s next, guys? No undies day? Pants optional all the time?

It could happen. Public nudity has already been legalized in some places, mostly just beaches and private resorts. But some towns in Vermont and Oregon have liberal nudity laws and I’ve read about at least one community having problems with perverts flashing in school areas.

Wikipedia has a list of places in the U.S. where you can go clothes-less and oh-so-helpfully includes a nice full frontal photo of a group of guys enjoying said freedom. I wish they’d given me a warning. When I was a kid, we had to sneak a peak at the National Geographic, the Sex and Reproduction article in the encyclopedia, or the Playboy your brother had hidden under his mattress to see stuff like that. Now it’s on daytime television.

One response to “Our Formerly Christian Culture”