I am posting mostly positive stuff today because I’m in an extremely sour mood. Sifting through the smouldering wreckage of yesterday’s events,I have a spleenful of bile that must be evacuated.

Prayers up for our Ting. Virginia has no idea what they unleashed yesterday. Some facts:

McAwful outspent Cuccinelli by $15 million;chump change to a professional hustler like him.

He had Cankles stumping for him for weeks.That’s how he got so much of the women’s vote.

He learned from the Rapist that in order to win,you need a third party to siphon critical votes from your opponent. It worked for him…twice.

Raunch Prius did an interview on WMAL Monday claiming they backed the GOP candidate all the way. Mark Levin called in to the show and tore the little prick a new one for lying. They left him with no support at all. I could post the audio,but I doubt anybody cares much.

Christie Kreme was asked to come and stump for Cuccinelli and turned him down flat. “I got my own race to run” was the answer given by the presumptive GOP-e nominee for 2016.

Between Cuccinelli and the stalking horse,53% voted against Obamacare in the person of The Punk.

The Punk left his own victory party to go raise money for Hillary…that’s not a joke.

As I look into my crystal ball I see it coming down to Ted Cruz vs. Krispy Kreme for the republican nomination to get crushed by the democrat fraud machine. When the Tea Party carries Cruz to the nomination,I have no doubt he would be on his own. That’s how they roll.

It’s so frustrating because with any help,we could have held the governorship. There are no moral victories. A runner-up is the first loser.

THE SOLDIER IN THIS PICTURE IS BRENT McCARTHY OF THE WELSH GUARD. THE MURDEROUS PILE OF DOGSHIT NEXT TO HIM IS SUPPOSEDLY AN AFGHAN COP. SECONDS AFTER THIS PICTURE WAS TAKEN,THE GOAT-HUMPING HELLSPAWN SHOT BRENT DEAD. THE SOLDIER IN THE BACKGROUND IS LANCE CPL. LEE DAVIES. THE SHITBAG KILLED HIM,TOO. WHY THE HELL ARE WE STILL THERE????

Man,am I in a pissy mood.

Proof that Republicans are NICER than Democrats

Looking at the 16 point jump from Obama’s 2008 popular vote and his inauguration week approvals got me wondering if disappointed presidential voters traditionally give a big old Atta Boy to the new president they didn’t want.

So I did a historical search and ranked the results by the size of the Atta Boy, then colored them by party. Note: I ignored second term election/inauguration stats, because I only wanted to see how disappointed voters responded to a relatively unknown new president. 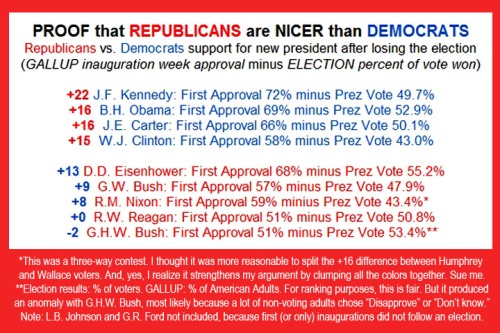 It was never about race 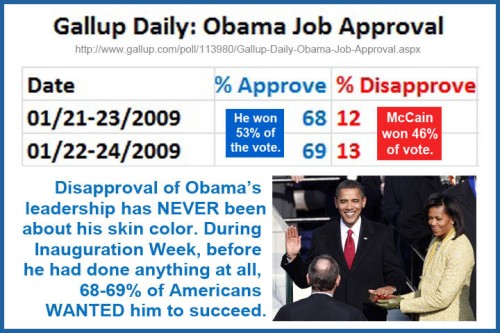 It is impossible to say what motivated the 12% who disapproved of Obama before he’d done anything. Perhaps for some, it was due to his race, but it’s more likely it was due to his nasty demeanor toward President Bush, the U.S. military and the War in Iraq, his extreme support for abortion, and the way his party cheated Hillary out of “her” presidency.

Comments Off on It was never about race

The NY Slime said Obama “misspoke” when he said (repeatedly) that if you like your plan you can keep it and that premiums would go down.

Listen to him here, explaining very slowly and very carefully, to John Boehner that if you like your plan you can keep it and that premiums will go down. 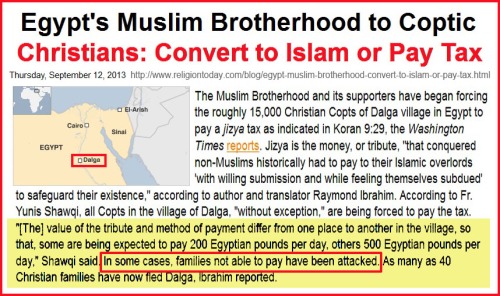