Excerpts from report By Paul Huebl:

The Obama Administration sent out the Metropolitan DC police armed with guns, stun guns, clubs, tear gas and riot helmets to forcefully remove or arrest aging military veterans from their own monuments.

But when the veterans refused orders to disperse or to discontinue their dismantling park service barricades, the cops backed off and allowed the peaceful veteran protest to carry on.

Some will argue that the cops were outnumbered or afraid. I don’t buy that for a second. What happened was the officers recognized that their oath of office and duty was in conflict with the orders from the Whitehouse and acted accordingly.

Since DC Police Chief Cathy Lanier is a supreme Obama loyalist, we can expect heads will roll.

Now it will be incumbent upon Americans to defend and support every DC cop that refused unlawful commands to victimize our veterans under color of law.

I need some GOOD news

I’ve run out of words to express my outrage and my tummy hurts. I need some warm fuzzies! 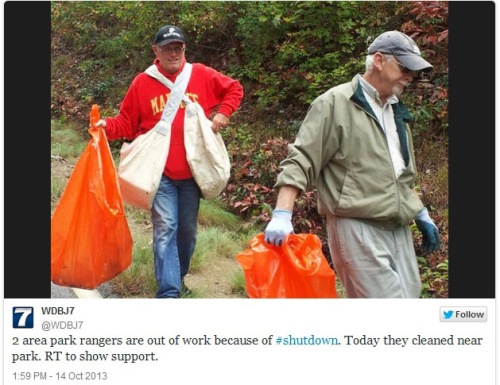 Be careful, Big Government. We may realize we actually don’t need you after all.

LOTS of tweeters remarked on how they’ve totally forgotten the government has been shut down.

The Flight 93 National Memorial is a 400-acre bowl-shaped area.

The land was acquired partly by

The monument itself was paid for with

The Flight 93 National Memorial Campaign was a partnership among:

The National Park Service, its volunteers, and its partners ordinarily work to honor the sacrifice of those on Flight 93.

The NPS still has staff there … to keep people OUT.

Senate Democrats continue to REFUSE to bring a House bill to the floor for a vote that would authorize funding for the National Park Service and get all our parks reopened.

Never pick a fight with a Leatherneck

Saturday, October 12, 2013: As police refused to help the peaceful marchers participating in a planned event, more than a thousand pro-abortion activisits mobbed, menaced and physically assaulted pro-life advocates and a member of Parliament at the Australia March for Life.

Bryan Kemper reported he and other pro-lifers were hit, stepped on, and had things have been thrown at him by pro-aborts, who blared loud heavy metal rock music, blew air horns and shrill whistles and pounded on drums to keep pro-lifers from being heard. They also took over the stage and ripped down the banners. Later, a member of Youth for Life Australia received this angry, shrill phone call: “I saw you at that march on Saturday, you’re nothing but a pro-life bigot, child f**ker, you molestering as***le, I know where you live and I’m coing to burn your house down.”

But one woman who came to participate in the anti-life protest said afterwards, “I came to this rally and watched both sides with curiosity. I have to admit I was planning to join the ‘other side’ and I was pretty excited, it was to be my first ever rally. I got the shock of my life when I saw how ugly they were and I had to sit down to stop myself trembling. I am having triplets, cancelling my abortion on Monday morning. Thank you. My heart has been changed.”

Faye Arellano stood quietly outside a Catholic church in Toronto, holding up a pro-life placard and a rosary. Her peaceful protest suddenly turned ugly when an unknown bystander grabbed her by the hair, smacked her to the ground, kicked and punched her repeatedly, then pulled a knife. A good samaritan helped shield her from the knife as police arrived and arrested the attacker. Faye, who sustained a concussion, says she lost her placard during the assault, but when she was rushed to hospital, she still had her rosary in her hand. “Holy Mary Mother of God, pray for us sinners now and at the hour of death. Amen.” 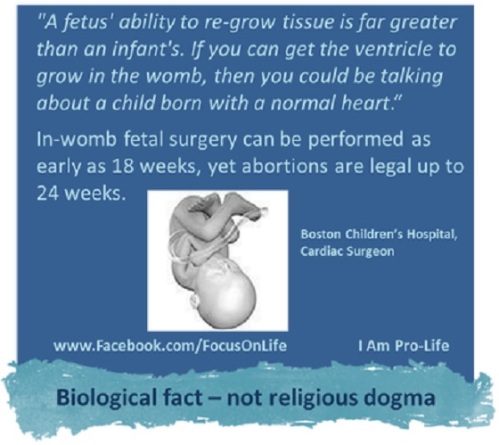 Monday October 14, 2013: Another abortion clinic in Ohio has shut down

The Cleveland Center for Women’s Health, owned by late-term abortionist Martin Ruddock, is the third abortion clinic in Ohio to close its doors in the past six months. Ruddock has a history of running afoul of state health regulations. Upon inspection in 2006, Ruddock’s clinic was cited by the Ohio Department of Health and closed temporarily for failing to meet basic health standards, such as checking a patient’s vitals before performing a late-term abortion. The permanent shut-down is due in part to Ohio’s law prohibiting abortions late in pregnancy.

The “save the life of the mother” exception is a lie

Way back in 1972, when abortion’s legality was still being debated, the medical director of the Pittsburgh Planned Parenthood, Dr. Rose R. Middleman, was quoted as saying: “It’s extremely rare, if nonexistent, for a physician to have a medical reason to abort a woman in the 7th or 8th month.”

The reason is that no matter what, the mother must deliver the child, either via labor and delivery or via a C-section, The only difference between a late abortion and an early birth is whether the child is killed or cared for.

Dr. Middleman’s statement “It’s extremely rare, if nonexistent” was in 1972! Since then, medical science has advanced tremendously, with younger and younger premies surviving. My brother’s triplets were all 2 to 3 lbs and nearly died shortly after birth. They’re all college graduates now.

How much MORE true is it now that “late abortion to save the mother” is nothing but a political slogan?

Comments Off on Pro-Life News Update