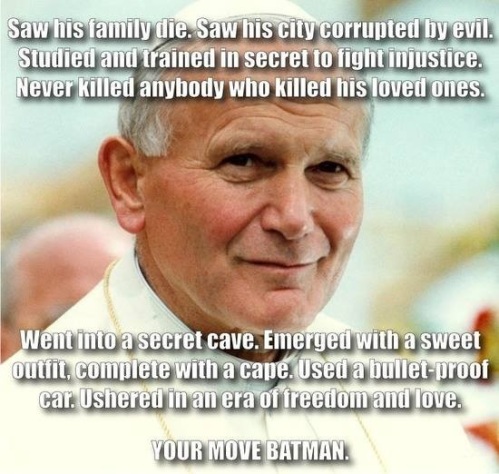 Popes John XXIII and John Paul II will be declared Saints by Pope Francis next spring on the Feast of Divine Mercy.

Church rules governing the process for beatification and canonization ordinarily require the confirmation of 2 miracles: the first before a candidate is beatified, and a 2nd subsequent miracle after the beatification to fulfill the requirements for canonization.

The point of these miracles is to ensure that God wants these people canonized, since it is He who performs miracles, not the saints.

Saints are held up to the faithful as examples, so the Congregation for the Causes of Saints begins by being very careful who is even considered for beatification. There is extensive research into the person’s life and writings, interviews with survivors, etc.

The Church appoints people to act as the Devil’s advocate and argue against the candidate and any reported miracles.

The miracles leading to the canonization of Pope John Paul II include a French nun healed of Parkinson’s disease and a Costa Rican woman healed of a brain aneurysm.

Netflix has three pages of movies about JPII. I’ve seen these three and can highly recommend them.