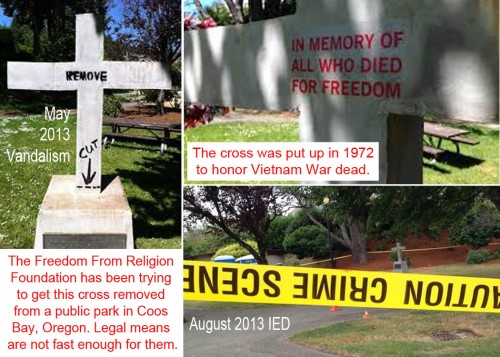 Unknown person(s) detonated an Improvised Explosive Device at a Vietnam War Memorial. The cross, donated to the city in 1972, sustained some damage but is still standing.

The cross was also vandalized last May by someone who wrote the word “Remove” on it. A prominent atheist group has been trying to force the community to take the cross down, claiming it “forces Christianity” on unwilling citizens. 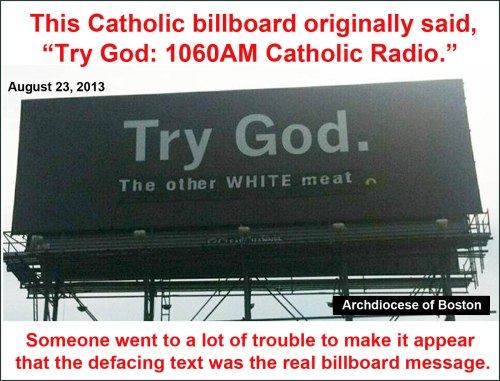 “An act against one faith, in some ways, is an act against all faiths, and against all people of faith. This act of vandalism was certainly not a prank. It should cause us to reflect on the subtle and not-so-subtle ways that hostility is increasing against the practice of faith and against religious expression.

People of faith, including Catholics, contribute so much to the fabric of our society in the Boston-area, through social service organizations, hospitals, schools and in little acts of service in every community. The message of “Try God” is a hopeful one as it invites everyone, in some way, to connect with a faith community and participate in building a civilization of love.”

1060 AM WQOM (Boston) offers a combination of national shows from EWTN Radio (Ave Maria Radio, Catholic Answers) and local productions (The Good Catholic Life, daily Mass, and the recitation of the Rosary). Outside of the AM range, you can listen @ wqom.org for computers or with iCatholicRadio app for mobile devices and tablets.

Holy crap. Obama was NEAR … even IN my personal space yesterday. Ew. Ew. Ew. His bus-ocade drove down a road I know well; he even did a townhall at my alma mater …. where I hear he warned against “the GOP shutting down the government.”

Riiiiiiiiiiiiiiiiiiight. Cuz it’s like totally the Party of the People who are NOT in Power that has spent us into oblivion. What a schmuck.

Between his preaching … I mean, speaking … engagements in Syracuse (Thursday evening) and Binghamton (Friday noon), his PR liars put out the utterly absurd tale that he saw some kids playing soccer and spontaneously asked to stop so he could kick the ball around.

Riiiiiiiiiiiiiiiiiiight. Cuz it’s like totally normal for the Secret Service to allow the president to just say “stop the car!” Not.

Channel 9 reported the “spontaneous” lie, along with getting the date wrong. ::eyesrolling:: See https://polination.wordpress.com/2013/08/14/and-you-watch-msnbc-nbc-because-why-exactly/ for the MSM’s map of Obama’s bus tour along with where these cities actually are … and have been for a couple hundred years give or take.

Now … I’ll grant you this. The stop in Tully was not on his public schedule, but neither was anything else for Friday morning. Clearly, he spent the night somewhere, got up, ate, left, etc. I get the point of not telling the whole world where he is at every moment. It wouldn’t be safe.

Plus there’s the sticky problem of announcing BusØbama’s actual route … you know, like they did last time? When mean-spirited racists stood on the roadside holding politically incorrect signs, pics of which are STILL floating around the interwebs. Can’t have that happen again, right? Or is it left ….

What I object to about his visit to Tully is the supremely stupid LIE that it was “spontaneous.” Let’s just overlook for a skinny minute that the Secret Service carries guns and doesn’t really answer to President “I’d rather play cards” Pantywaist anyhow. So he can’t order them to make a sudden change in schedule. Let’s just look at three little factoids I found easily on the net:

A. There was no practice scheduled, yet somehow BOTH Varsity teams were waiting at the field to shake his hand and laugh at his jokes. 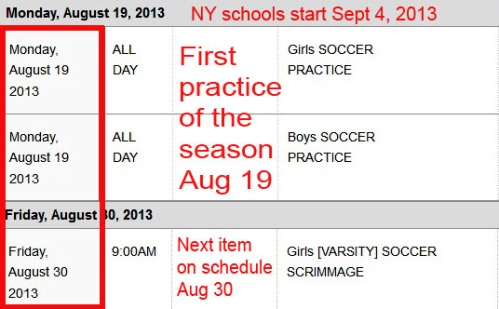 B. When you’re driving from Syracuse to Binghamton, you take Rte 81 South. Even if there was a practice going on, nobody could have seen it half a mile away, from a vehicle moving south, at speed, on the FAR side of a divided highway.

C. And even if someone did see a practice (that was not scheduled) from a distance (that was absurd), the reality of a presidential motorcade suddenly deciding to take the next exit and backtrack over unplanned and unfamiliar roads is just beyond ridiculous.

Sooooooooo … add one more lie to Øbama’s list. (Dearest speculates that a big donor called in a favor and they made it “spontaneous” to avoid pissing off other donors and to prevent Mean People from showing up with signs and cameras. Sounds about right.)

On the plus side, one of the photos WH photographer Pete Sousa sent out from the not-spontaneous visit sparked a little captioning fun at Twitchy.

And last but definitely not least, the one that got spit on my monitor:

I really hadn’t planned on posting anything today.I just sat down and started to browse for ideas for Monday.I wish I hadn’t.now I have to vent or nothing will taste right.

Today as many as 100,000 people are expected to descend on the mall for the 59th anniversary of MLK’s march on Washington.Every race pimp in the country will be there with their shiny brown faces claiming they’re carrying on Dr. Kings dream but encouraging the savages to kill white people.

Dr. King would be as hated today as Clarence Thomas is.They never mention he was a republican or that J.Edgar tapped his phones.He really did believe in bringing the races together.These slugs keep their place at the democrat table by keeping the ignorant masses angry at whiteys in general and republicans in particular.

I got to looking around marking an article here or there and suddenly I have a whole bunch of stuff.Guess I might as well get it out of my system.

My grandson’s regular season football  opener is tomorrow afternoon.Looking forward to it.