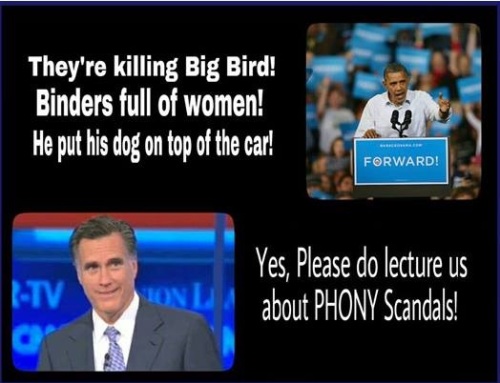 No matter how “phony” Obama may believe the Benghazi, IRS, (etc. etc. etc.) scandals are or how biased his lapdog media is in reporting on them, the American public can tell that Democrats are doing a crap job in Washington.

Before the federal government can pass a law, it must be passed by both the House of Representatives and the Senate, then signed by the President. At any given time, 2/3 or 3/3 are controlled by either Republicans or Democrats. The dominant controlling party obviously has the most power over what laws get passed and thus bears the majority of the responsibility for how well the government serves the people.

Note: The dominant 2/3 or 3/3 party is in pale colors under the poll results. The breakdown is in dark colors at the bottom. 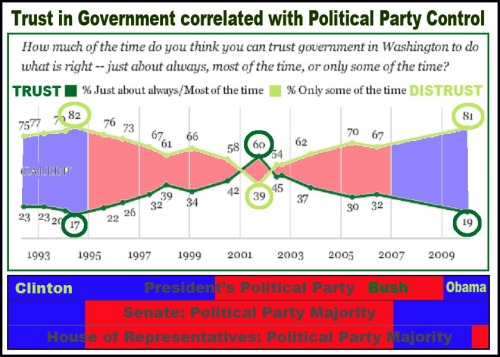 Democrats: Out of Touch with America 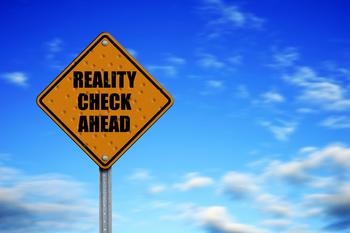 OBAMACARE: Nancy Pelosi described ObamaCare (The Affordable Care Act) as something that “captures the spirit of our founders” and will “put money back in the pockets of America’s patients” (WSJ, House.gov). POLLS show:

Only 37% have a favorable view of the law, down 9 points from a minority of 46% who approved of it at the time the Democrat-controlled Congress voted it into law. Meanwhile, Obama is spending money we don’t have to drum up support for this law that was passed more than four years ago, yet was so bad the very Congress that passed it went and exempted itself from.

RACE RELATIONS: When George Zimmerman was acquitted, Obama and many Democrat leaders said the nation needed to have an “honest discussion about race.” POLLS showed:

Only 35% of Americans agreed.

ECONOMY: In his latest series of speeches on the economy this summer, President Obama has insisted that “America has fought its way back” and has already “recovered” (LA Times). POLLS show:

Only 28% of Americans believe the U.S. economy is recovering.

ABORTION: Democrats are more pro-abortion than ever. In the 2012 election cycle, their TV ads were filled with pro-choice messaging, abortion rights activists were main speakers at the DNC, and the head of Planned Parenthood even introduced President Obama at a campaign rally (Politico).

Only 15% of Americans believe abortion is morally acceptable.

36% don’t know or don’t care about the morality of abortion.

THIS is what difference it makes!

This video concisely summarizes the Benghazi scandal, then adds new and explosive information. I.e., that multiple Arab news sources have traced a direct connection between money that Obama sent to the Middle East and the group that killed four Americans during their assault on our embassy in Benghazi.

THE FRIDAY FUNHOUSE AT LAST

So glad this is Friday.Were it any other day I’d have to report about:

As of this writing no suspects were in custody in any of these cases.

NOW HOW ABOUT SOME FUN?

I HAD TO STEAL THIS ONE FROM BLUEBIRD.

Frankly,I was shocked she posted it at GFC

HEY,GRUNT:DIDN’T WE ALL SUSPECT SHE HAD A BIGGER ONE THAN HER RAPIST HUSBAND?

THE WHITE HOUSE IS PLANNING A CLOSED-DOOR HEARING ON BISEXUALITY NEXT MONTH.REALLY.

THINGS THAT MAKE YOU GO EEEEWWWWWWWWWW

Added by CtH, cuz I just saw it at Facebook and Pete NEEDS it in his collection. ::snork:: 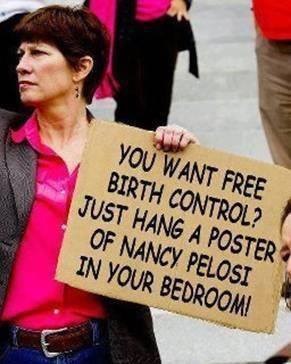 A friend sent me this link the Dictionary of American Regional English (DARE) @ http://dare.wisc.edu/.

I took the synonym test for fun. I knew maybe half on each list. Totally zoned out on “rear” thinking it was about outhouses. Duh. It went with “raise” … as in “children.” Double duh.

I also learned two new ways to complain when my tummy hurts – collywobbles and mulligrubs. And for bonus, I found a wonderful frog picture for my collection to illustrate it. 🙂

Comments Off on For word lovers

About Egypt: Please read and pray.

This may be as close as we are likely to get to the horse’s mouth on this one. Ting is a good friend and a good Christian lady with no ax to grind. If she says these are real emails, I believe her.

“The Muslim Brotherhood is showing the world its true colors.” 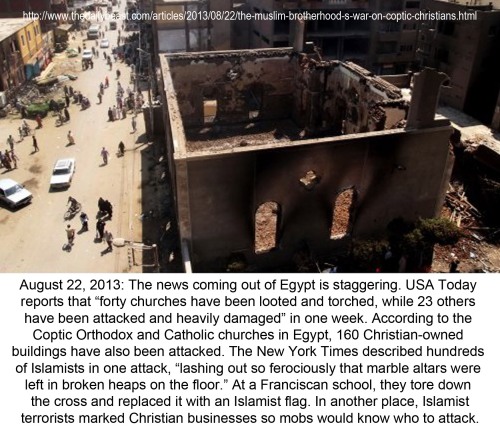 My next door neighbor, Sam, is a lovely, lovely new American citizen whose family are all still in Egypt. He is a Coptic Christian, as are the rest of his family. He asked that I spread the word, so I figured this was a good place to get started.

You may have heard in the last few days about Egypt through the media. I hope you will take time to read the email below. As an Egyptian who was born in Egypt and is now an Egyptian-American, I cannot agree more with the content of this email. It truly explains the current situation in Egypt accurately. The Brotherhood is nothing more than a terrorist group who tries to take away the tiny bit of freedom that everyday Egyptians have and impose their radical religious beliefs on others. I have been enjoying the freedom and democracy here in America. I hope someday that my family and other Egyptians will have the same freedoms or even a small part of the liberties we so often take for granted. Please, pass this message to your friends and may I ask your prayers for all law abiding Egyptians both Muslim and Christian.

Hope all is going well at your end. I wish you happiness and health and all the good in the world.

I need to ask you to please spread the word. You know us, you know Egypt and I am so surprised at the media in the US and Europe. We took to the streets in millions on the 30th of June to oust Morsi and the MBs from Egypt.

These people are terrifying us. Their leaders literally said that the terrorist attacks in Sinai could stop if morsi is released. I heard them myself. We took to the streets again today to support General Sisi’s campaign against terrorism.

MBs are real dictators, they have alienated everybody at the time of Morsi’s rule. The constitution they passed is far from democratic ( I read it all ). Morsi released terrorists from prisons, in thousands. I saw faces that I thought were sentenced to death because they killed both Egyptians and tourists on the peaceful land of Egypt. Please spread the word, it is not a coup, it is a war against terrorism and we are supporting Sisi all the way.

MBs are hiring thugs to shoot protestors, they steel dead people’s bodies and claim they belong to them to show the world that they are the victims. I know one of them! And other friends know of other examples.

Al Jazeera, CNN, Guardian and BBC are lying to the world. They are showing Morsi’s supporters as millions and this is not true.. MBs are protesting near by my mother’s place and they kidnap people and they torture them inside the “mosque” can you believe this?

Our army is being shot at in Sinai and many soldiers killed while defending our land. We trust them, we sought their support to bring our country back and they responded to us.

I am sorry for my long email, and sorry to bother you. But I know you love Egypt and you know Egypt more than many Egyptians do. If you could spread the word, I and so many others will be very grateful to you.

Love you both very much, and wish you peace and happiness forever, Nermine

Added later by CtH … just saw this on Facebook: 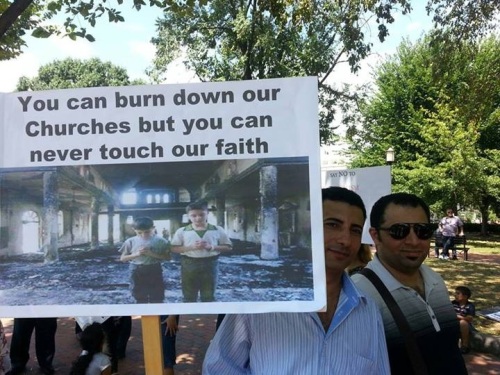 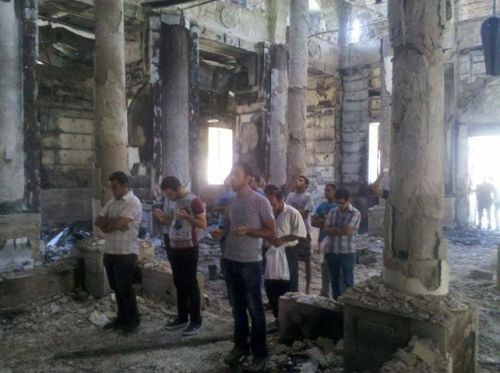 This is a wonderful testimony of real faith in action. I hope you’ll find time to watch it all the way through!

God Worked Through a Christian Woman to Prevent a Massive Elementary School Shooting [2:44]

“It is the Lord your God you must follow, and him you must revere. Keep his commands and obey him; serve him and hold fast to him.” Deuteronomy 13:4