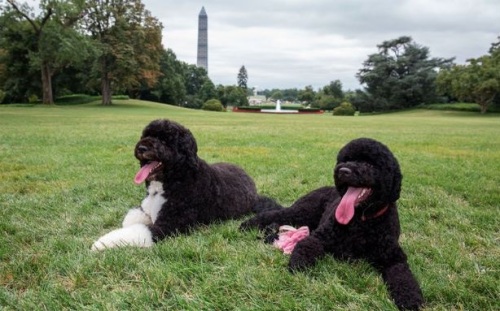 Since they didn’t milk the media by building this up for weeks and weeks prior to the arrival ZOMG and meeting the family ZOMG and getting a name ZOMG … you know, like how they did when they got Bo, I’m thinking this is definitely a MEDIA SQUIRREL event to distract attention from the worsening situation in the Middle East and the fact that people here at home are waking up to the economic train wreck that is ObamaCare.

When the first First Dog was named Bo, folks speculated it stood for the Narcissist in Chief, Barack Obama. We’re thinking they’ve done it again with Sunny. “If I had a son, he would look like Trayvon.” Sunny looks just like Bo, minus the WHITE parts.

I’m happy for Bo. He’ll be lots happier with another high energy dog to play with, though I am wondering if Sunny will need her own personal, six-figure, tax-payer funded, groomer-feeder-trainer-walker or if Bo will maybe share his with her.