They WANT a race war

IMHO, this is the only explanation for the non-stop race baiting we’ve had inflicted on us since Obama took office.

Among the worst offenders is Al Sharpton. You really have to watch this two minute video clip all the way through to get an appreciation for just what a scum-sucking, bottom-feeder represents the Left on race issues.

And what is the fruit of this evil? Here’s one example:

In Seattle, a 35-year-old black man held an unarmed white man at gun point and demanded that he apologize “for all the things white people did to black people.” The victim said that he was “scared out of his mind” and “apologized profusely.” The aggressor was apprehended and identified by his victim who is suspected of menacing three other people the same night. He has a weapons-related conviction from 2002, an obstruction of justice conviction from 2006 and a reckless endangerment conviction from 2009.

A senior citizen drove his brand new Corvette convertible out of the dealership. Taking off down the road, he floored it to 80 mph, enjoying the wind blowing through what little gray hair he had left.

“Amazing,” he thought as he flew down I-94, pushing the pedal even more. Looking in his rear view mirror, he saw a state trooper behind him, lights flashing and siren blaring. He floored it to 100 mph, then 110, then 120. Suddenly he thought, “What am I doing? I’m too old for this,” and pulled over to await the trooper’s arrival.

Pulling in behind him, the trooper walked up to the Corvette, looked at his watch, and said, “Sir, my shift ends in 30 minutes. Today is Friday. If you can give me a reason for speeding that I’ve never heard before, I’ll let you go.”

The old gentleman paused. Then he said, “Years ago, my wife ran off with a state trooper. I thought you were bringing her back.”

“Have a good day, sir,” replied the trooper.

I need to vent!

The idea that the fricking Obama Democrats have identified and targeted MILITARY FAMILIES as needing “intervention” has just had my blood pressure at boiling point all day. See https://polination.wordpress.com/2013/08/17/its-going-to-get-worse/.

So forgive me in advance … the following will be a lot more coarse and snarky than I usually post. If that’s gonna bother you, please move on to something else. Goodness knows we’ve all got more email and blogs and facebook than we could ever find time to read.

So … now that I’ve apologized … I can just let ‘er rip. Cuz I am seriously PISSED today. 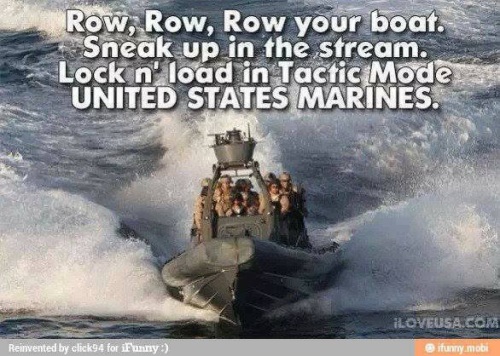 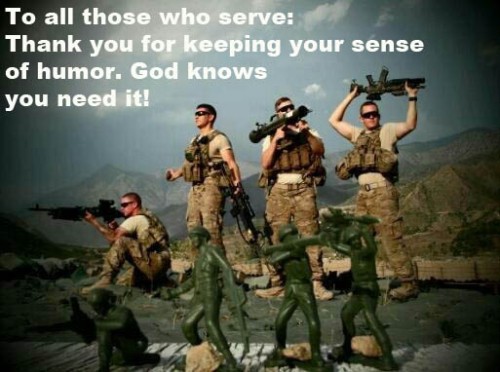 And no, I do not own stock in the company. 🙂

It’s going to get worse 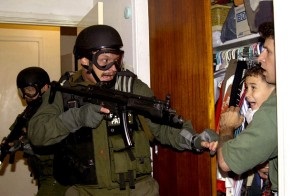 Under Obamacare, the federal government will have total control over the standards by which parents are allowed to raise their children.

These standards will be enforced via mandatory home visits conducted by entities appointed and funded by the federal government.

Their job will be to identify families that “need” to be visited and to intervene in the home life so as to meet federally mandated benchmarks.

Visitation mandates may include children being required to go to certain schools, take certain medications, receive certain vaccines, or even have limited – or no – interaction with parents.

Home visit “intervention” will be at the discretion of the agency, which could target families for any reason.

The Health and Human Services’ website states that families in the following “high-risk” categories will be definitely targeted:

This will not be a voluntary program.

Failure to allow home visits or to comply with dictates could result in removal of children from the home.

The Obama administration claims the provision applies only to Medicaid families. The statute, by its own definition, has NO LIMITATION whatsoever.

Intervention may be with any family for any reason and parents will have no right to do anything but comply.

Pete’s blog has gotten long enough, it’s taken a while to load, so I thought that, instead of adding my stuff to his and making it even slower, I’d just do an addendum.

First up … Colonel Meow’s vet told his hooman to brush his teeth and the moron actually tried to do it.

This video is a clip of a Christian comedian’s routine, explaining to non-hand-raisers how to behave if they go to a hand-raising church. FUNNY!!

This video is a sweet little love story you have to watch to the end. Tissue alert. 🙂

The list of attacks on churches and their institutions around Egypt is staggering. The list is a work in progress. They’re adding to it as they get reports, so I will just link, not copy/paste.

We fought a Revolution to free ourselves from stuff like this

Please note that all this began with the OBAMA ADMINISTRATION. And the list could be much, Much, MUCH longer, except I don’t have the heart to compile it.

March 2009: A leaked secret report from the Missouri Information Analysis Center (MIAC) profiled third-party supporters, homeschoolers, people who know the U.S. Constitution and people who have related bumper stickers on their cars, fly the flag or invest in gold as potential domestic terrorists.

April 2009: A Department of Homeland Security published “Rightwing Extremism: Current Economic and Political Climate Fueling Resurgence in Radicalization and Recruitment”, a report which expressed many of the same sentiments and targeted the same people.

August 2009: The Obama administration created flag@whitehouse.gov and encouraged people to rat on their friends, acquaintances, colleagues and neighbors who don’t like Obamacare.

January 2013: The Director of Terrorism Studies at West Point’s Combating Terrorism Center published a paper in which he identified racists/white supremacists, anti-federalists and fundamentalists as the three far-right groups responsible for a “dramatic rise in the number of attacks and violent plots” in America.

Anti-Federalists: He defined these as people who discuss and object to a “New World Order” and who feel that the federal government has become overly corrupt or tyrannical, infringing our Constitutional rights.

August 2013: the Concord, New Hampshire Police Chief asked Homeland Security for a quarter million dollar armored vehicle which he said they needed to combat domestic terrorism threats by “groups such as the Sovereign Citizens, Free Staters and Occupy New Hampshire.

Interesting aside. I went to Occupy New Hampshire’s website. They are decidedly unhappy about the Concord PD characterizing them as domestic terrorists. But hey, that’s how it goes when you support Big Government. Why shouldn’t the PTBs turn the vast machinery you handed them AGAINST you, huh?

You think your Obama t-shirts make you safe? Read the history of the French Revolution. When those turkeys got done slaughtering their enemies, they turned on each other and then the people got so sick of the violence that they elevated a strong leader named Napoleon. Cuz, you know, nothing says “We want freedom” like a guy like Napoleon.