The studied ignorance of the pro-choice crowd 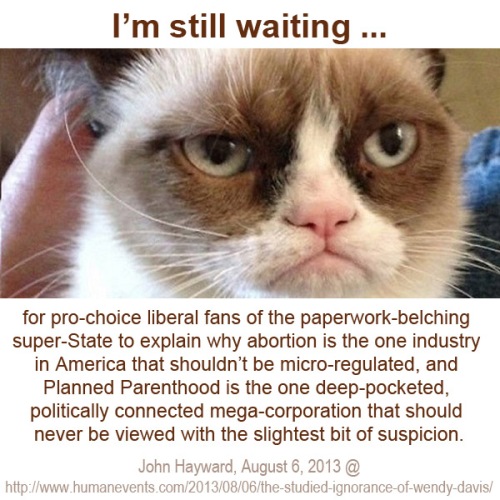 Then she admitted that she knew nothing about the Gosnell case. I guess we can safely assume she doesn’t know about the Planned Parenthood of Delaware nurses and supervisor who have been blowing the whistle about “meat-market-style, assembly-line abortions” at their clinic, either.

That’s typical of the lazy, dictatorial nature of “pro-choice” activists. They don’t think it’s necessary to know what they’re talking about, or consider a single word spoken by the other side of the debate.

The studied ignorance of the pro-choice crowd is a telling contrast with the tendency to accuse everyone else – men and women alike – of having no clue about pregnancy, and therefore no right to discuss abortion.

In related news, the very same people who thought calling Sarah Palin “Caribou Barbie” was hilarious are now working themselves up into a towering frenzy of outrage over Erick Erickson referring to Wendy Davis as “Abortion Barbie.” But that’s par for the course among the totalitarian Left.

President Barack Hussein Obama went on TV last night to speak to the American people about the increased threat of terrorist attacks.He was even considerate enough not to disrupt network programming.HE DID IT ON A LATE NIGHT ENTERTAINMENT SHOW!!!

“The odds of dying in a terrorist attack are a lot lower than they are of dying in a car accident, unfortunately,” Obama said when asked by Leno if it is still safe for Americans to travel abroad in light of recent heightened terrorist threats

UNFORTUNATELY? UNFORTUNATELY??? THAT’S ALL YOU GOT? JUST WHAT THE HELL IS SO UNFORTUNATE, YOU NAPPY HEADED, LOP-EARED HEAP OF VOMIT? THAT AS MANY AMERICANS AREN’T KILLED BY TERRORISTS AS DIE ON THE ROAD??

If I don’t end up with angina it’ll be a miracle.

NOTE TO BARRY:WHEN YOU TALKED ABOUT THE 2014 OLYMPICS IN RUSSIA YOU MENTIONED  TRACK,SWIMMING POOL,BALANCE BEAM…ITS THE WINTER OLYMPICS,YOU TWADDLING TWIT!A REPUBLICAN WOULD GET ROASTED OVER SUCH A DISPLAY OF TOTAL IGNORANCE

Barry has never been more than an empty suit

I have NO trouble believing this confidential report is totally true.

RUSH: Did Valerie Jarrett Issue The Order To Stand Down In Benghazi? [12:11]

I finished this bracelet yesterday, put teensy drops of 454 glue on the knots and waited 24 hours for the glue to set and out-gas. Tonight, I photographed it and photoshopped the graphic to offer it for sale on-line.

Before I started, I took a photo of the materials I assembled in case anyone was interested in how I go about designing my jewelry. Color is what excites me the most and, after that, texture. I’m terrible at following patterns, so I make it up as I go along and never know how a piece will look until it’s done. 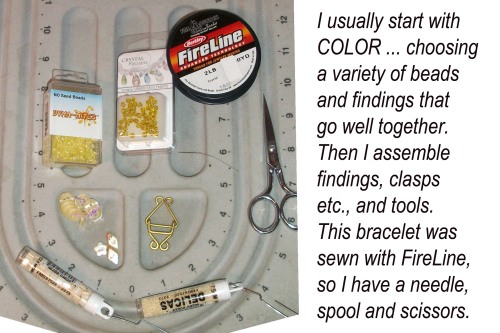 How do I know it’s done? It tells me. I have a weird relationship with my art. It speaks to me. I’ve heard other artists say this is true for them as well. Maybe it’s what the ancients meant by a “muse.” I don’t know. I just know that when a piece wants something, it tells me and when it’s all done, I know it. I wonder sometimes if this is what makes me an artist rather than a crafter. To be quite honest, my craft skills are not actually all that good!

Comments Off on Osh Kosh Grows Up