Movie Recommend: A Hand of Peace

My one quibble with this DVD is the formatting. In particular, the lack of any menu and the excessive volume on the ads you have to slog through before you can play the feature. This has been true for the other Ignatius Press DVDs I’ve rented from Netflix. I don’t know if the ones they sell are formatted in a more user-friendly way, but the Netflix disks are a pain in the neck.

Comments Off on Movie Recommend: A Hand of Peace

Ethan is so lucky to have such a prayerful and wise mom!

This is a (longish) story about how I taught my son why lying is bad.

So the other day I came out into the living room to find one of my plants knocked over and dirt all over the floor. I asked Ethan what happened; he responded that he’d “bumped into the plant.” A perfectly reasonable explanation, except the part where the laws of physics and gravity would have had to have been suspended in that particular time and place in order for a mere bump to have resulted in the scene before me.

Despite the clear dishonesty, Ethan held fast to his story, and spent the rest of the day acting the martyr, as though he had done nothing wrong and Mean Old Mommy was just out to get him. For my part, I told him that his privileges — games, movies, cartoons, playing outside — were suspended until he could tell me the truth. But it was clear to me, no matter what words I used, the severity of what he had done — namely, lying to his mom — was just not sinking in.

Now, I myself had a dishonest phase while I was growing up. While I could not have told you at the time why I continued to lie even when it was stupid to do so, looking back, I can better translate my feelings into words. My (flawed) thinking was that, sure, I wasn’t being very kind to my parents, but I still felt love in my heart for them, and that made everything okay in the long run. I suspected that the same thing was going on in Ethan’s head. I also knew that words weren’t working, and he’s much more of a visual learner anyway. An object lesson came to mind.

I bought three graham cracker pie crusts. Then I called Ethan into the kitchen. I explained to him that I had also once had a problem with dishonesty, and what my (flawed) rationalization was for it, as stated above. I asked if that’s how he felt too. He nodded. So I told him that, since telling him what I meant wasn’t working, I would show him.

I handed him the first (empty) pie crust and said, “I made you a pie!” He laughed and told me that it wasn’t a pie, it was just a crust. I responded that yeah, but it sure looks like a yummy crust, doesn’t it? But it still wasn’t a pie. A good start for one, yes, but not a pie. I explained that, while feeling love in your heart for a person is a good thing, it’s not enough by itself to show you love them.

We then came to the second pie crust. “I made you a pie!” This one wasn’t empty — it was full of garbage and fruit peels, and topped off with some selections from the cat’s litter box. He laughed at first when he saw it, cause he’s six and poop is funny. The laughter quickly stopped when I asked him how he would feel if I’d really made it with the intent for him to eat it. I explained how the trash was when he was rude, disrespectful, etc., and that that’s bad enough. But the worst part, the cat poop, was when he lies to me. I then pulled a thing of sprinkles out of the cupboard. “Do you like these?” I asked, to which he responded, “Yes!” “Great!” I then thoroughly sprinkled the “pie.” “Does that make it better?” I asked. He said no — it was still cat poop. I explained that that’s what happens when he pretends that everything is okay between us when it isn’t, when he pretends that lying to me is no big deal.

Seeing the matter thus illustrated, as opposed to simply verbalized, had an immediate and obvious effect on him. I quickly got the truth of what happened to my plant afterward — turns out he did “bump into it,” but what he left out was the part where he “bumped into it” in the course of running into the house while swinging a rubber mallet. Rather crucial detail, that. And then I got a genuine apology, both for his carelessness in how he’d come into the house that particular time, but also for not telling me the truth about it in the first place, and withholding the truth for as long as he had.

We then went back into the kitchen, where he was given the honor of throwing the cat poop pie in the trash. Then we used one of the good crusts to make a Creamsicle pie. (It was yummy.)

A rare moment of winning at motherhood. I’ll take it. Also, there was a fair amount of prayer in both before and after stages; I can’t take credit for the poop pie part of the object lesson. So a big thank you also to God — You rock, Sir.

Sent out with permission from Angela, who I’m happy to say is a good buddy of mine! 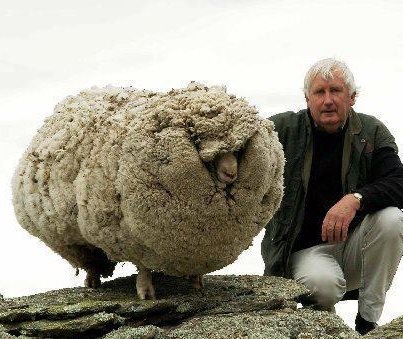 This is Shrek the Sheep. He became famous in 2004 when he was found looking like this, because he’d been hiding from his shepherd for six years.

When he was shaved, his fleece weighed an amazing 60 pounds. When sheep are shorn regularly, their fleech weighs about 10 pounds.

Poor Shrek had to carry that great burden on his back simply because he had run off and hidden from his shepherd.

“Come to me, all you who labor and are burdened, and I will give you rest. Take my yoke upon you and learn from me, for I am meek and humble of heart; and you will find rest for your selves. For my yoke is easy, and my burden light.” Matthew 11:28-30 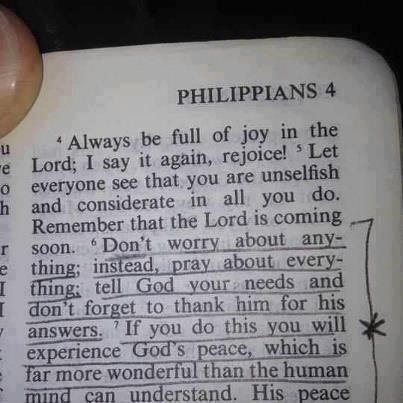 It’s been a tough week.Finding good news has been harder than trying to find your chewing gum on the floor of the henhouse.

Seems the CIA had a number of operatives on the ground in Benghazi and now they’re trying to hide them to keep them from testifying.Barry is also using the excuse of Russia granting Snowden asylum to duck a meeting with Putin.Understand this….Putin is a real thug.The genuine article.From the first time he saw Bozo he knew he was a bladder full of gas and a hatful of air.Barry never wants to be seen as leading on anything he can be pinned down to.That’s how he survives…by not looking like he had anything to do with the shit he’s perpetrated.

PLUGHEAD THINKS HE’S RUNNING FOR PREEZY IN 2016.JUGHEAD WILL HAVE TO HOLD HIS HAND AND LET HIM DOWN GENTLY AS ONLY ONE MAN CAN TO ANOTHER.

(I just threw up a little)

THE NETWORK WHERE WANNA-BES AND NEVER -WERES TOIL IN OBSCURITY,COMFORTED ONLY BY THE FACT THAT EVERYONE AROUND THEM IS EVERY BIT AS STUPID AS THEY ARE