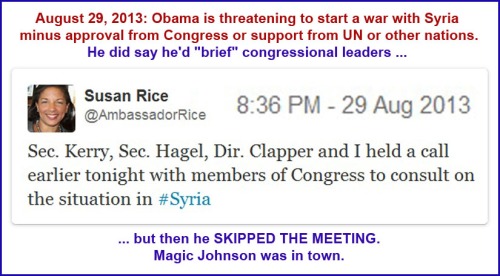 Should we be surprised? No.

You really have to watch this video to get the full flavor of what a SICK JOKE Obama is for sending the likes of Dennis Rodman to represent the United States of America.  Talk about rodeo clowns. 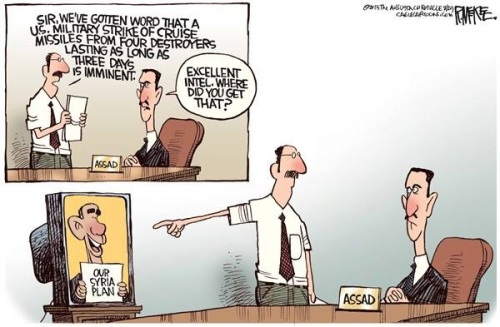 * President Obama wants America involved in Syria’s civil war pitting the antagonistic Assad regime against equally antagonistic Al Qaeda affiliated rebels. But he’s not quite sure which side is doing what, what the ultimate end game is, or even whose side we should be on. Haven’t we learned? WAGs don’t work in war. [CtH: WAGs = Wild Ass Guesses.]

* We didn’t intervene when over 100,000 Syrians were tragically slaughtered by various means, but we’ll now intervene to avenge the tragic deaths of over 1,000 Syrians killed by chemical weapons, though according to the White House we’re not actually planning to take out the chemical weapons because doing so would require “too much of a commitment.”

* President Obama wants to do what, exactly? Punish evil acts in the form of a telegraphed air strike on Syria to serve as a deterrent? If our invasion of Iraq wasn’t enough of a deterrent to stop evil men from using chemical weapons on their own people, why do we think this will be?

* The world sympathizes with the plight of civilians tragically caught in the crossfire of this internal conflict. But President Obama’s advertised war plan (which has given Assad enough of a heads-up that he’s reportedly already placing human shields at targeted sites) isn’t about protecting civilians, and it’s not been explained how lobbing U.S. missiles at Syria will help Syrian civilians. Do we really think our actions help either side or stop them from hurting more civilians?

* We have no clear mission in Syria. There’s no explanation of what vital American interests are at stake there today amidst yet another centuries-old internal struggle between violent radical Islamists and a murderous dictatorial regime, and we have no business getting involved anywhere without one. And where’s the legal consent of the people’s representatives? Our allies in Britain have already spoken. They just said no. The American people overwhelmingly agree, and the wisdom of the people must be heeded.

* Our Nobel Peace Prize winning President needs to seek Congressional approval before taking us to war. It’s nonsense to argue that, “Well, Bush did it.” Bull. President Bush received support from both Congress and a coalition of our allies for “his wars,” ironically the same wars Obama says he vehemently opposed because of lack of proof of America’s vital interests being at stake.

* Bottom line is that this is about President Obama saving political face because of his “red line” promise regarding chemical weapons.

* As I said before, if we are dangerously uncertain of the outcome and are led into war by a Commander-in-chief who can’t recognize that this conflict is pitting Islamic extremists against an authoritarian regime with both sides shouting “Allah Akbar” at each other, then let Allah sort it out.

Martin had a dream and they weren’t in it 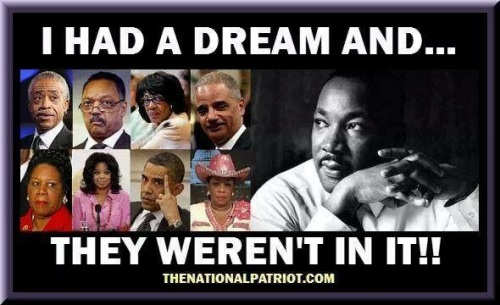 Why I don’t like the Obamas by Mychal Massie

The other evening on my twitter, a person asked me why I didn’t like the Obama’s? Specifically I was asked: “I have to ask, why do you hate the Obama’s? It seems personal, not policy related. You even dissed (disrespect) their Christmas family picture.”

The truth is I do not like the Obamas, what they represent, their ideology, and I certainly do not like his policies and legislation. I’ve made no secret of my contempt for the Obamas. As I responded to the person who asked me the aforementioned question, I don’t like them because they are committed to the fundamental change of my/our country into what can only be regarded as a Communist state.

I don’t hate them per definition, but I condemn them because they are the worst kind of racialists, they are elitist Leninists with contempt for traditional America. They display disrespect for the sanctity of the office he holds, and for those who are willing to admit same, Michelle Obama’s raw contempt for white America is transpicuous. I don’t like them because they comport themselves as emperor and empress.

At :10, Obama refers to our armed forces as “my military”

Mychal Massie writes regularly for WND. You can link his columns and/or sign up to get them in email @ http://www.wnd.com/author/mmassie/

Undervaluing what we are

I wrote a little book about this.

Catholic spirituality is geared toward those who overvalue what they are, yet the opposite is so common and certainly is my big spiritual defect.

I didn’t start growing spiritually until I started writing my own prayers or rewriting traditional ones so they corrected rather than aggravated my defect.

This is my desperate attempt to keep our page hits up.

Seeing the Left’s new found appreciation for military action is somewhere between infuriating and hilarious. Kind of infurilarious.

After an hour of getting trash tweeted with her blatant hypocrisy, Kohn sent this out:

Who is Sally Kohn?

Sally Kohn is a liberal political commentator, community organizer, and founder and chief education officer of the Movement Vision Lab, a grassroots think tank. Kohn is an unpaid contributor for the Fox News Channel, and writes for publications like Huffington Post, The Washington Post and USA Today. She and her partner, Sarah Hansen, have a 3 year old daughter. 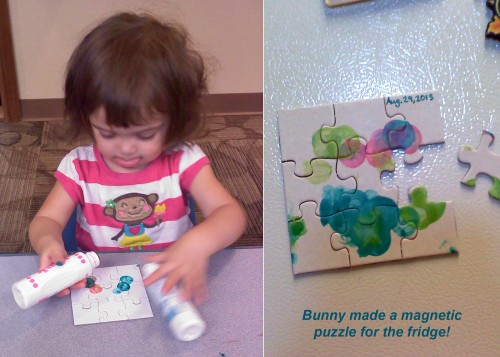 Okay, I admit it … the bottom pic isn’t my actual grandson, though he’s about the same age and has the same beverage preferences!

I love Thomas Sowell. One of his books totally turned me around from being a dumb “I just want to be nice and feel good about myself” Liberal to an educated “If policies hurt people, they need to be changed” Conservative.

I was particularly impressed by Sowell’s discussion of how rent control laws drive housing costs up and housing quality/availability down, thereby most harming those at the bottom of the socio-economic heap. The two cities in the U.S. that have the oldest and strictest rent control laws – New York and San Francisco – also have the highest housing costs. This is not a coincidence. The laws CAUSED it.

I was better able to follow Sowell’s data on the rent control issue than on some other, less familiar topics, because dh and I once were part owners and full-time, live-in managers of a 6-unit apartment building. We were there from the initial investment – finding a property and purchasing it – through renovating, managing and living with tenants as neighbors, and finally selling it.

I completely understood what Sowell was saying about rent control laws, not only because I’d been a renter for many years and then seen every aspect of the mechanics of owning rental property, but also because I’d visited a friend once in a rent controlled apartment in NYC. It was a tiny, crappy little place that he paid way too much to live in because housing was so scarce. The landlord wouldn’t do anything to maintain the place, because he wasn’t getting most of the rent the tenant paid.

The landlord – who had invested in the building and had to pay all the bills and taxes – only got the capped, controlled amount of rent the law allowed. It was the renter who had happened to be in unit when rent control went into effect who was making money off the deal! It was a total scam. This person had nothing of her own invested in or at risk and did nothing at all to maintain the property. She didn’t even live in the building any more. She just kept the lease in her name, so the landlord couldn’t legally raise the rent; then she sub-let to other people, who she charged more than she paid the landlord!

I was totally not surprised to learn in the video that the very first minimum wage law was designed to benefit white union workers at the expense of black non-union workers. Minimum wage is just another example of how the Left demonizes the Right as “uncaring” when it is the Left’s policies that most hurt the poor.

President Obama hasn’t yet taken unilateral action against Syria for crossing the “red line,” but he might soon. Or, more accurately, he’ll tell the military to go when Valerie Jarrett (aka vj44) tells him to … and then he’ll play cards.

TIP: Google vj44 and see how many ways Valerie Jarrett uses it or is referred to by it. It seems quite clear that Barack “I’d rather play games than govern” Obama is the 44th President In Name Only. Suggest we put 44PINO on the license plate of his little RCOTUS clown car in all future photoshops.

Tweeters got a jump on titling the inevitable movie:

How to Twerk (NOT what you think!!)

Comments Off on How to Twerk (NOT what you think!!)