CNN’s Don Lemon makes sense and gets hate for it

Bill O’Reilly enraged many with his “Talking Points Memo” criticism of black culture in America. One surprising ally was CNN’s Don Lemon who approved of O’Reilly’s critique, and even said that he didn’t go far enough. 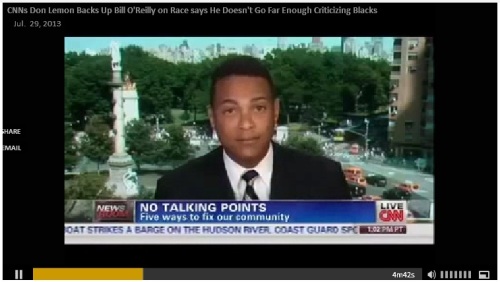 Video [6:34] embedded here is worth viewing. Can you believe that a host on CNN played a clip of Bill O’Reilly on FOX News?!

I do have one quibble with his ending shot at Republicans.

Supposedly, the only time we talk about black on black violence is when we want to use it to slam Democrats. Um … no. We talk about it, but the Left doesn’t listen. And how well did it work out for you when you talked about it, hmm, Don? You got a lot of backlash, didn’t you.

Well, pal, we get blamed for every damned thing that is wrong with everything in this country … in the world, for crying out loud. Whether we TALK about things or DON’T talk about them, we get blamed. We’re racists and haters and homophobes just because we checked R on our voter registration.

So tell me this, Mr. CNN Host … when was the last time you defended George W. Bush? Are you even aware that he SAVED MORE BLACK LIVES than any Democrat ever with his African AIDS program?

Get the PLANK out of your own eye before you presume to identify some phantom splinter you think you see in mine.