So,anything happen over the weekend?Seriously,I got up at 1AM yesterday morning to go to work and tuned in to Red Eye on FNS only to see Whorealdo,the Moustachioed Miscreant with a panel of lawyer and judge types discussing the verdict.I want to thank Chrissy for being all over this like a duck on a junebug.The left,race hustlers that they are,exhibited the kind of reasoned thinking and tranquil attitude they’ve become noted for.At first blush,it would seem that Holder would arrest Zimmerman for violating the punk’s civil rights,but I don’t know how anxious they are to bring another charge they cannot possibly win unless they get 12 blacks like the OJ jury.The case served Obama’s original purpose,which was to stir up the lazier of his minions to get off their butts and march to the polls.

Everybody has expressed their opinion from the little Toad,Harry Reid(it’s not over) to footballers: ‘he won’t last a year before the hood gets him’ and ‘the jurors should all kill themselves.’ Victor Cruz had to quickly delete his tweet and apologize.I haven’t heard if Roddy White has yet.Why alienate a large part of your fan base?Speaking of jurors,I have all respect for them for ignoring the immense political pressure and coming to a verdict based solely on the evidence.They want to remain anonymous,for obvious reasons,but the judge is considering overturning the order and making their information available.Sharptongue would have mobs storming every one of their houses while the DOJ would stand by and watch,if not participate.

I will have a couple of things about the trial,but mostly I have other things you can’t find all in one place anywhere. 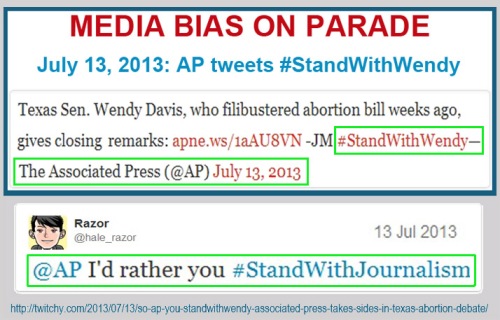 AP’s coverage of the Texas protests ignored the many ugly incidents by Pro-Aborts, as well as President Barack Obama’s tweet in support of the protesters’ grisly cause.

The Texas bill, which the Left decried as all-out war on women, would ban abortions after 20 weeks and require abortion clinics to meet basic health and safety standards.

Oh the horror. And here we thought they wanted abortions to be rare and safe. ::snort::

Comments Off on Media Bias on Parade

The WHITE HOUSE issued a WRITTEN statement. Where is my surprised face.

Barack Obama shoves his face in front of cameras at every opportunity, but on this, his staff sends out a press release. ::snort:: The people most likely to riot are the same people least likely to pay any attention to a written statement.

They are also the people most likely to do whatever Obama tells them to do. If he cared about calming the waters, he’d make the rounds of the media outlets they DO pay attention to and make repeated, personal, and very firm calls for them all to calm down. But he doesn’t, so he won’t.

This meaningless statement is only out there so, when they do riot, he’ll be able to pull his sad face and wipe his faux tears and say, “I said from the beginning that we should respect the rule of law.” And his sycophantic toadies will believe or pretend to believe he actually did NOT want riots.

But I believe in my heart of hearts that he does want them and he’s going to get them even if he has to send his own people into these communities to incite them. Oh wait. He already did that … and taxpayers financed it.