When will the Two Witnesses appear?

Revelation 11 prophesies that God will send Two Witnesses to Jerusalem to preach, teach and generally annoy sinners for twelve hundred and sixty days. They will wear sackcloth and have the power to stop the rain, to turn water into blood and to afflict the earth with any plague as often as they wish. Anyone who tries to harm them will die.

Revelation 11 continues to say that, at the end of the 1,260 days, Satan will kill the Two Witnesses and leave their corpses lying in the street. After three and a half days, God will restore them to life and, as He carries them away in a cloud, a great earthquake will kill 7,000 people and destroy a tenth of Jerusalem.

Revelation 12 prophesies that, when Satan tries to destroy God’s faithful in Jerusalem, they will flee into the desert. Satan will try to stop them by spewing “a torrent of water out of his mouth” but the earth itself will open and swallow the flood. They will go to a place God will have prepared for them, a place Satan cannot go, where they will be safe “for a year, two years, and a half-year.”

Zechariah 14 prophesies that in the End Times, a great earthquake will split the Mount of Olives in two. Half the mountain will move north, half south and God’s faithfull will flee the city via the east-west rift that is formed. 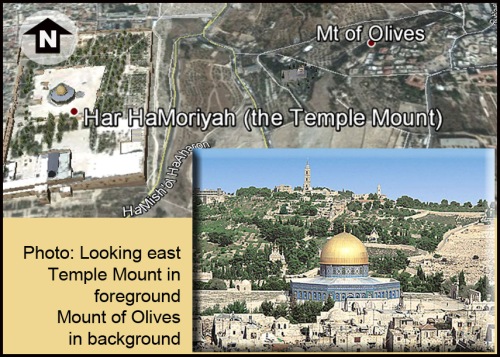 It’s more than possible for Jerusalem to suffer an earthquake of this magnitude; it’s near a fault line.

If these three prophecies describe a single catastrophic geological event, then the cumulative evidence is that it will occur at the MID-POINT of the last seven years. If I’ve got this right, the Two Witnesses will appear about a month after the 7-year treaty is signed.

Comments Off on When will the Two Witnesses appear?