Dating the End of the World

God gave us SEVEN prophecies to help us know when the end is near. (SEVEN. What a shock. Not.) These key passages are:

Sometime after the Lord set me to do this extended study of the Book of Revelation, I had a dream about the numbers in the third of the seven passages – Daniel 12:5-13.

5 I, Daniel, looked and saw two others, one standing on either bank of the river. 6 One of them said to the man clothed in linen, who was upstream, “How long shall it be to the end of these appalling things?”

7 The man clothed in linen, who was upstream, lifted his hands to heaven; and I heard him swear by him who lives forever that it should be for a time, two times, and half a time; and that, when the power of the destroyer of the holy people was brought to an end, all these things should end.

8 I heard, but I did not understand; so I asked, “My lord, what follows this?”

9 “Go, Daniel,” he said, “because the words are to be kept secret and sealed until the end time. 10 Many shall be refined, purified, and tested, but the wicked shall prove wicked; the wicked shall have no understanding, but those with insight shall. 11 From the time that the daily sacrifice is abolished and the desolating abomination is set up, there shall be one thousand two hundred and ninety days. 12 Blessed are they who have patience and persevere for the one thousand three hundred and thirty-five days.

13 Go, take your rest, you shall rise for your reward at the end of days.”

The message of the dream was, “What if it’s a word problem?” I woke up feeling excited, because word problems were my favorite thing in math class, probably because they were long on WORDS (which I love) and short on NUMBERS (which I do not love).

It’s been months since that dream, during which time I have been playing with the possibilities and pondering their meanings. Today, during my Bible study, I felt the Lord saying it was time for me to share my best guesses with all y’all.

The beginning point for the count is “the time that the daily sacrifice is abolished.” This happened when Jesus died once for all. I.e., 3793 in the Jewish calendar or 33 AD as we now count back on the common calendar.

This first equation leaves out 1,335 and the factor “two times.” The 1,335 passage can be interpreted to mean the time between the 1,290 date and the 1,335 date, which is a subtraction problem that uses “two” of the “times” given to us, thus completing the word problem and getting us to 2013. 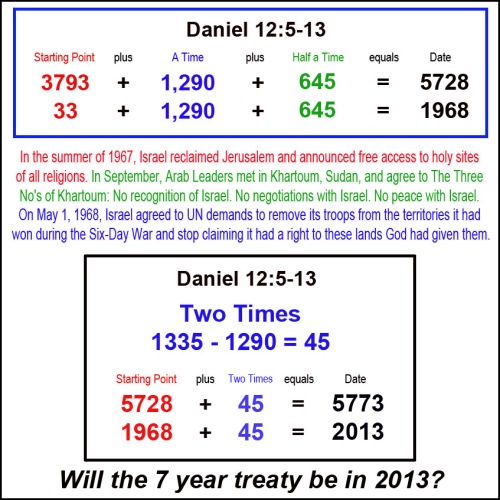 Jesus died in April of 33 and the major capitulation by the Jews in 1968 was in May. Since we’re in June of 2013, we may have already passed the critical time when this equation set should have borne fruit and I’m just spitting in the wind here.

Or … maybe the months aren’t that important.

The next six months should be interesting!

I kept a close eye on the United Nations General Assembly last September, but saw no sign of any seven year agreement. Since then, I’ve learned of the SEVEN highly unusual lunar events in the FIRST THREE months of 2014, which are closely followed (first one April 2014) by an even more unusual TETRAD of total lunar eclipses divided in half by a full solar eclipse, all of which hit major Jewish holidays.

It occurred to me that Jesus didn’t tell us what relationship the Rapture would have with the last seven years that begin with the firm covenant. The SEVEN lunar events in January, February and March of 2014 are all New Moons and Full Moons, which are symbols of BEGINNING and ENDING. And the first LUNAR ECLIPSE occurs the very next month, ON the very Passover I had highlighted as a potential Rapture time because of how the Roman and Orthodox Easters overlap with each other and with the Jewish Feast of Firstfruits.

I’ve been rethinking my End Times calendar in light of this new information and it seems like a good bet that the Rapture will come in April 2014 and that the global chaos that will inevitably follow will set the stage for that seven year agreement (possibly next fall when the second Blood Moon happens) and the Anti-Christ’s abrupt rise to global dictatorship.

My idea that the seven years will track with the Jewish calendar fits this scenario beautifully, because the Jewish year that begins next fall (5775) is a Shemitah year when all debts are forgiven. These happen every seven years. If year one of the last seven years is 5775, the next Shemitah year will begin right after Armageddon with Tishri 5782 – Yom Kippur (Atonement) and Sukkot (In-gathering).  Final Judgment!

Comments Off on Dating the End of the World