Will the Rapture occur in April 2014?

I believe the Rapture will occur during the Passover-Easter season when both Roman and Orthodox Easter Sundays coincide with the Jewish Feast of Firstfruits. See https://polination.wordpress.com/2013/05/23/rapture-in-nisan/ for my rationale.

Based on my research, these dates overlap about 25% of the time. The first graphic shows the Roman and Orthodox Easter dates from 1990 through 2049. The second shows, on the left, where these dates match and, on the right, where the matchers also coincide with the day after the Sabbath within Passover, which is the Feast of Firstfruits.

In every instance of triple overlap, the Monday of Holy Week is Nisan 14, meaning the day of Jesus’ triumphal entry into Jerusalem (celebrated Palm Sunday) coincides with the date of his crucifixion.

In only one of these 13 years, however, do the days of April match precisely the days of Nisan. 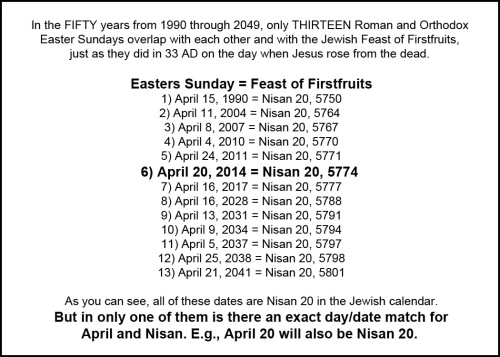 Will the Rapture occur next Spring? Obviously, I can’t say for sure. But I wouldn’t bet against it! 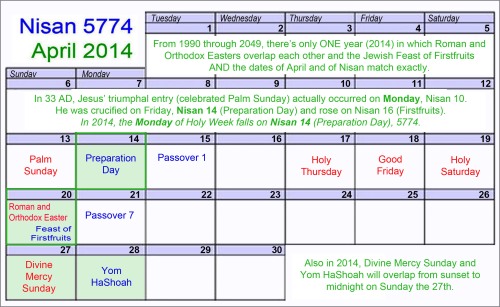