During the 2012 campaign, Romney ran an ad that said Chrysler, which had received bailout from American taxpayers, was going to start producing Jeeps in China.

PolitiFact labeled this “The Lie of the Year.”

Funny thing is … the ad is absolutely 100% true. The Obama administration did play a hand in selling Chrysler to Italians who were planning to build Jeeps in China.

PolitiFact quibbles that the Romney campaign had been “crafty” with its word choice, giving the “impression” that all Jeep production, and therefore American jobs, were being moved to China. Ergo, Romney Lied!

And people probably died … or something.

Why? Because in LiberalSpeak, when conservatives are misquoted, taken totally out of context, or simply lied about, FAKE is the same as ACCURATE.

A Lesson On Firearms – Jessie Duff World Champion Shooter On The Range [7:14] 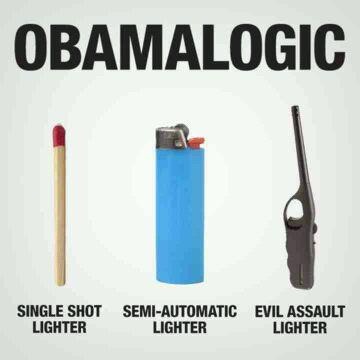 Comments Off on Jessie Duff shows her stuff

A brief explanation of Obama Democracy

Barack Obama and John R. Lott Jr. were once colleagues at the University of Chicago Law School. Lott says that Obama was very different from other academics in that he was unwilling to talk to anyone who did not agree with him about something. Lott reports that, when he attempted to talk, Obama would just turn his back and walk away.

In 2008, when Jodi Kantor of the New York Times was writing an article on Obama’s time at the University of Chicago Law School, she noted that others had told her the same thing. “Sen. Obama did not engage much with conservatives/libertarians.”

In 2012, Cardinal Timothy Dolan, the president of the U.S. Conference of Catholic Bishops, reported that the Obama White House exhibits the exact same attitude. Although the Obama Administration invited the bishops to “work out the wrinkles” of the HHS mandate, when the bishops arrived at the White House, they were simply told that the mandates were a done deal and the Catholics should just put up and shut up.