A few thoughts on Gun Control

Chicago has the toughest gun laws in Country. This year 446 school age children have been shot and 62 killed in Chicago! 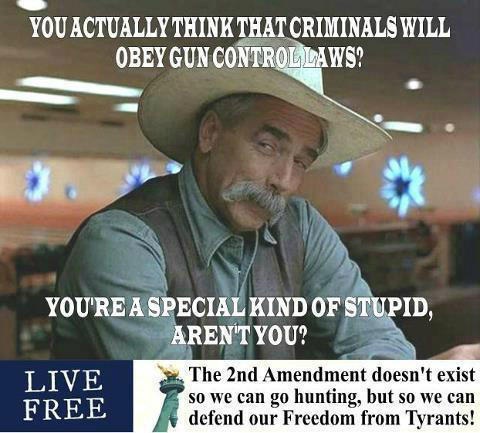 Weird how Dems weren’t calling for gun control when Islamist went on a rampage at Ft. Hood

The following is excerpted from http://www.nationalreview.com/corner/335987/gun-owners-segregationists-and-jim-sleeper-charles-c-w-cooke by Charles C.W. Cooke:

Anybody who bothers to look up 1857′s Dred Scott v. Sandford decision will notice right away the court’s awful observation that if slaves were permitted to enjoy full citizenship rights, then they would — shock horror! — enjoy the right

“to keep and carry arms wherever they went.”

This, the court thought, would be disastrous.

The fear of blacks with guns is not, of course, new. The very first gun-control measures in American history were designed to keep arms out of the hands of blacks and Indians:

The Massachusetts and Plymouth colonies both prohibited the sale of guns to Indians in the early seventeenth century, and the “Black Codes” of the mid-eighteenth century required French colonists in Louisiana to disarm and beat “any black carrying any potential weapon.”

Many pre-Civil War state constitutions went further, reserving the right to bear arms … to “freemen,” which, naturally, meant whites. After their damnable cause was lost, the KKK picked up and ran with disarmament as a way of keeping blacks down.

As Adam Winkler has observed, “gun control” was “at the very top of its agenda.” The Democratic party’s “Black Codes,” which barred former slaves from owning guns in the (segregated) post-bellum South, were passed for the same purpose.

“deprive any citizen of the United States of any arms or weapons he may have in his house or possession for the defense of his person, family, or property,”

for that was exactly what segregationists set out to do.

Robert Franklin Williams’s classic work, Negroes with Guns, tells a tale of the KKK’s systematic attempt to disarm black Americans — and of the National Rifle Association’s work in forming a counter-group called the “Black Armed Guard” — as late as the as the 1950s.

As Williams points out, it was guns in the hands of his family that saved their lives and allowed them — literally — to fight the KKK and their allies.

15 responses to “A few thoughts on Gun Control”