If you’re new to this series, you can catch up here:

Who were the Nicolaitans? @ https://polination.wordpress.com/2012/11/17/who-were-the-nicolaitans/

To the angel of the church in Smyrna, write this:

The first and the last, who once died but came to life, says this:

I know your tribulation and poverty, but you are rich. I know the slander of those who claim to be Jews and are not, but rather are members of the assembly of Satan. Do not be afraid of anything that you are going to suffer. Indeed, the devil will throw some of you into prison, that you may be tested, and you will face an ordeal for ten days. Remain faithful until death, and I will give you the crown of life.

Whoever has ears ought to hear what the Spirit says to the churches.

The victor shall not be harmed by the second death.

Continuing with Smyrna as a type for the Roman persecutions of the Church:

A “vital element in the growth of early Christianity was persecution and martyrdom. Early persecution was sporadic and local. The first intensive effort by the state to eliminate Christians came after the burning of Rome during the reign of the Emperor Nero in AD 64. Nero made the Christians the scapegoats for the disaster, and they were savagely tortured and burned, at least in and around Rome.

Empire-wide persecutions came periodically in the third and fourth centuries. Untold numbers of Christians died heroically for their faith; only relatively few recanted. So impressive were the many who died gladly for Christ that they were more than replaced by fresh converts. The Christian writer Tertullian observed: ‘the blood of martyrs is seed.'”

PERSECUTION TIMELINE: Because of the line “you will face an ordeal for ten days”, I was curious to see if there were ten periods of persecution and/or a ten year period of persecution. I found both. (N.b., the colors are just to help you track the text more easily.)

FIRST: 64 AD – In 64, a great fire broke out in Rome, destroying portions of the city and economically devastating the Roman population. Emperor Nero was rumored to have ordered the fire himself and, in order to divert these rumors, blamed and savagely punished the already-detested Christians for the fire. Tradition tells us that the Apostles Saint Peter and Saint Paul were martyred in Rome at this time.

SECOND: 81 to 96 AD – Among the more famous victims in this persecution were Emperor Domitian’s own cousin, Flavius Clemens, and his wife, Flavia Domitilla. It seems likely that the Apostle Saint John was exiled to Patmos as part of this persecution. Domitian was the first of the emperors to deify himself during his lifetime by assuming the title of “Lord and God.” Note the use of seven stars on the coin in connection with Roman power and imperial divinity. 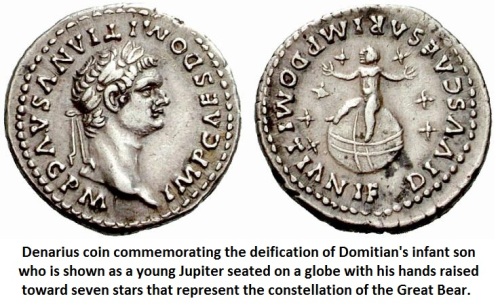 THIRD: 109 to 111 AD – Emperor Trajan directed that no steps were to be taken by magistrates to ascertain who were or who were not Christians, but at the same time, if any person was denounced and admitted that he was a Christian, he was to be punished. In Bithynia, it was a capital crime to admit to faith in Jesus.

FOURTH: 177 AD – For a long period, it seems the imperial policy was live and let live. As long as Christians weren’t a nuisance, the state left them alone. One notable persecution took place in southern France that apparently started as an unofficial movement to banish Christians from public spaces. Anti-Christian mob violence forced official action, leading to the arrest, imprisonment, torture and execution of Christians. 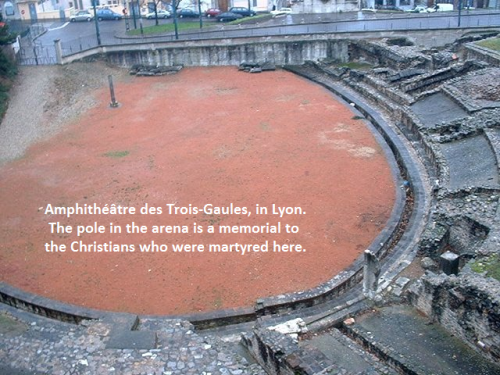 FIFTH: 197 to 211 AD – Emperor Severus outlawed conversion to Christianity or Judaism. Persecution under his rule was particularly severe in Syria, Egypt and Africa. Some of the famous Christians put to death in this period included the martyrs of Madaura, Perpetua and Felicitas, Origen and Origen’s father Leonides.

SIXTH: 235 to 238 AD – Emperor Maximinus Thrax instituted an empire-wide persecution of Christian clergy. It was a tough time to be a bishop, especially in Rome. Pope Saint Pontian was exiled to the Sardinian mines in 235 and died there of privation. Pope Saint Anterus lasted only weeks in office (November 21, 235 to January 3, 236).

SEVENTH: 250 to 251 – In an effort to annihilate Christianity altogether, Emperor Decius issued an edict requiring all citizens to sacrifice to the emperor in the presence of a Roman official and obtain a certificate (libellus) proving they had done so.

EIGHTH: 253 to 260 AD – Under Emperor Valerian, Christians were forbidden to visit their cemeteries and had to offer sacrifice to the Roman gods. Punishments included heavy fines, loss of rank, exile or death.

TENTH (ten years long) 303 to 313 AD – Emperor Diocletian instigated “The Great Persecution”, ordering the destruction of Christian churches and texts, forbidding Christians from meeting for worship, arresting clergy, requiring all inhabitants of the empire to sacrifice to the gods and punishing those who refused.

Things you never knew about the Vatican Library

Founded in the 14th c., the Vatican Library is one of the oldest libraries in the world and contains 82,000 historic books, including a 4th century Bible. In order to preserve and make them available to scholars and historians around the world, the Vatican is embarking upon a multi-year project to digitize, store, archive and put the entire collection on line!

The bewildering hypocrisy of the Left

In the wake of the Newtown horror, New York City’s Mayor Michael Bloomberg (who has 24/7 armed bodyguards) predictably demanded “immediate action” to disarm law-abiding Americans, allegedly in the quest to protect the unarmed from the unlawful.

The lawsuit alleges the ATF officials and federal prosecutor created a risk to law enforcement officers such as Terry, that the firearms agents should have known their actions would lead to injuries and deaths to civilians and police officers in America and Mexico, and that the government tried to cover up the link between Terry’s death and the botched “Fast and Furious” program.

Meanwhile, anti-gun Leftists seem to be all in favor of gun violence, provided it only kills people they don’t like. 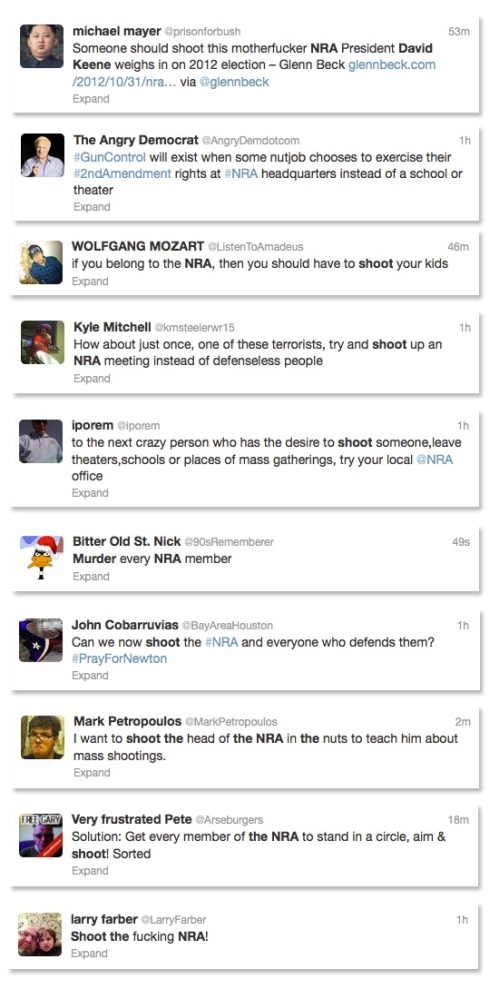 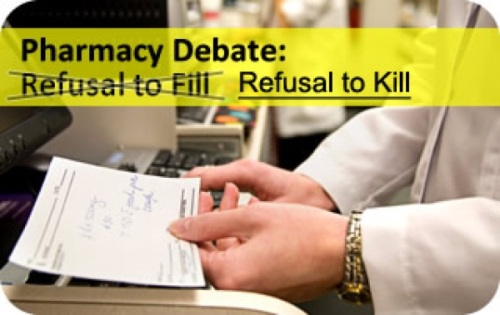 A coercive mandate requiring Illinois pharmacists to violate their consciences has been finally been defeated!

In April 2005, then-Governor Rod Blagojevich issued a rule requiring all pharmacists dispense all drugs, regardless of their personal beliefs.

At the time, Blagojevich made public statements emphasizing that the goal of the Rule was to coerce religious pharmacists to dispense drugs that violate their beliefs.

He asked physicians to report pharmacists who refused to fill such prescriptions and issued threats to the pharmacists and their employers.

On June 8, 2005, two pharmacists sued Illinois, saying the Rule violated the Health Care Right of Conscience Act, which makes it unlawful for any public official to discriminate or punish any person who refuses to “participate in any way in any particular form of health care services contrary to his or her conscience.”

In March 2006, Blagojevich again acknowledged publicly that the Rule was directed at pharmacists who objected to dispensing certain drugs on religious or moral grounds. He declared that such individuals should find another profession.

Finally, after seven years, the long battle is over!

On September 22, 2012, a state appellate court found in favor of the pharmacists and in December 2012, the Illinois Attorney General announced that it will not appeal the case to the Illinois Supreme Court.

My dogs have more class than this man

Below, we have abundant evidence of Barack Obama’s moral core. Following the Newtown horror, he was forced to pretend empathy while hiding his glee over a tragedy he and his cronies can use to advance their goal of disarming Americans.

His body language and tone of voice are instructive. I took screenshots and blew up the three times he wipes at an alleged tear, as well as the nearest open eye shot. Notice his eyes are not red and there are no tears. 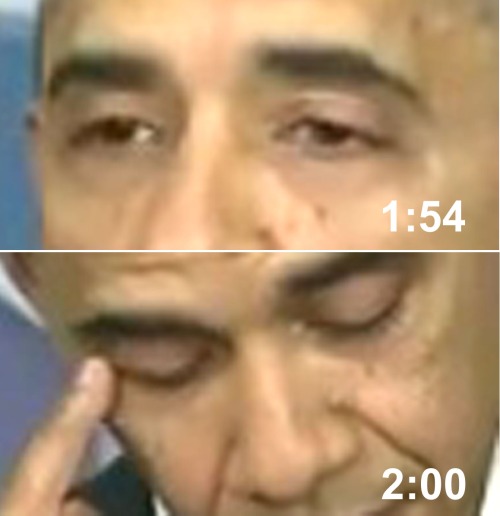 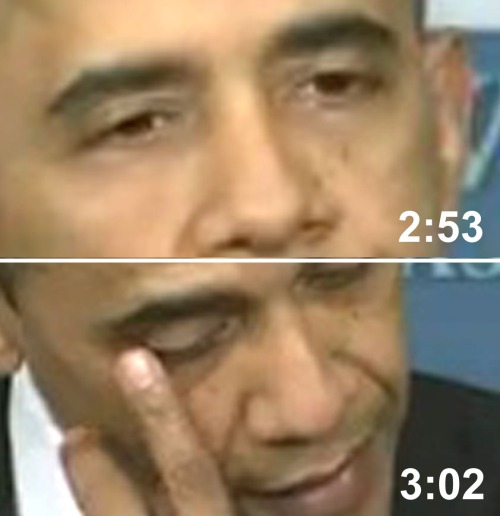 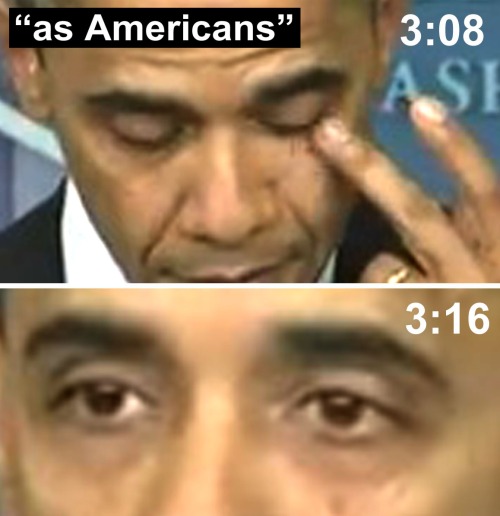 Also notice the third alleged tear wipe just after three minute point. When he says we “as Americans”, he uses his MIDDLE finger to remove the imaginary tear. Previously, he used his index finger. I’ve studied this and noticed he normally does use his index finger dominantly … except when he wants to do one of his oh-so-mature gestures to express his contempt for others.

There were three other points where I noticed the words and his facial expression opening windows into this man’s cold, dark soul. When he talked about hugging his girls and telling his wife he loves her, he looked pissed. 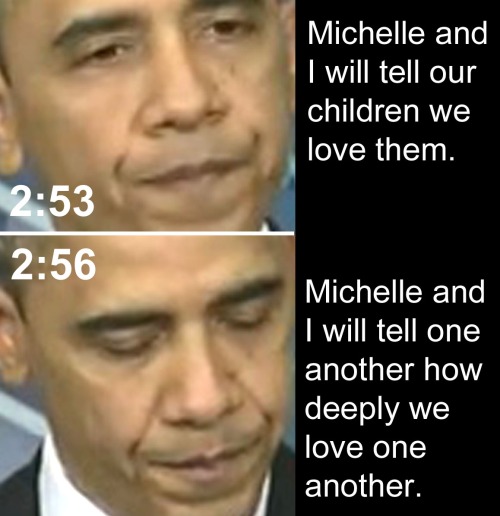 Also, check out how he says, “In the words of spricture” (sic), then pauses before quoting Psalm 147:3 “He heals the brokenhearted and binds up their wounds.” Look at his face as he pauses to prepare to read the Word of God. I swear … this is the ONLY GENUINE SADNESS he expresses the whole time. 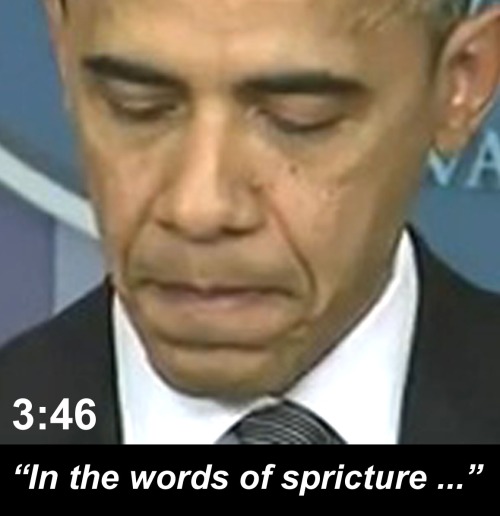