The Seven Churches of Revelation

I’ve been pondering the section in my Bible called “Letters to the Churches of Asia” [Rev. 1-3]. It’s puzzling in part because there were lots more than seven churches, even in that immediate area. 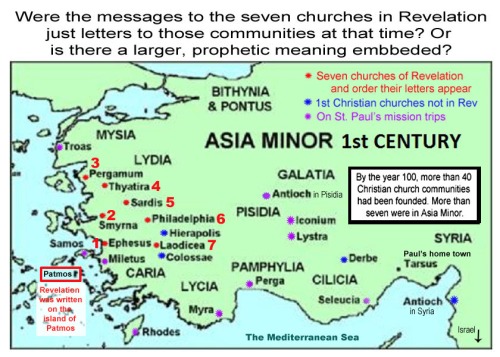 Plus, in the Prologue, John says the whole thing is a “prophetic message.” Yet the messages to the seven churches are more like the rest of the Epistles, with some Atta Boys and Clean Up Your Acts and Your Rewards Will Be Great in Heavens.

I found it confusing that Jesus had John make this grand pronouncement about prophecy, only to veer off into a bunch of memos to seven local parishes.

The footnote in my new Bible [New American Revised] says:

Seven is the biblical number suggesting fullness and completeness; thus the seer is writing to the whole church.

Okay. But if the messages were to the whole church at that time (mid-90s AD), why not just say that? Maybe it’s because “the church” extends not just geographically, but also temporally, and that the “churches” listed were not merely local first century congregations, but also types for future “churches” … whatever that might mean.

There are indications in the text that prophetic time travel is the correct interpretation. For example, the greeting contains THREE references to the future:

Also, Jesus shows Himself to John walking in the midst of the seven gold lampstands, which we’ve been told represent the seven churches. [See Rev 1:20, 2:1]

Look back at the map where I’ve marked the order in which the letters appear. Ephesus was the major port city in the area with a major road connecting it to Smyrna and Pergamum. From Pergamum, there was another road to Thyatira, Sardis, Philadelphia and Laodicea. The last was a cross-roads trading town, so after arriving there from Philadelphia, you could just hang a right and head back to Ephesus. [Described in The New Bible Dictionary. Eerdmans. 1962.]

It seems as if John was just working his way logically through a kind of “virtual tour” from his prison on Patmos. The only problem is that Miletus had a port too. And it was much closer to Patmos than Ephesus was.  This, and the fact one could actually walk the “lampstands” route, suggests the letters make up a contrived travel itinerary. And travel moves you not just through space, but also through time.

I’ve been researching the seven churches and their messages. I think I’ve cracked the code and it’s pretty darn cool! But I’ll save that for another blog. This one’s gotten long and we all have things to do.

5 responses to “The Seven Churches of Revelation”